Indian Affairs Under the Obama Administration – An End to Broken Promises?

At the close of the eighth Annual White House Tribal Nations Conference (WHTNC) this September, the President of the National Congress of American Indians, Brian Cladoosby (Swinomish), wrapped President Barack Obama in a traditional Pacific Northwest blanket and placed his own cedar hat on Obama’s head. Beaming, Obama addressed the assembled Native leaders: “After almost eight years as your President, I have been so privileged to learn from you and spend time with many of you while visiting more tribal communities than any other President.”[1] Indeed, on the campaign trail in 2008 Obama promised to correct past federal wrongdoings, renew the government-to-government relationship, and respect the treaty rights of tribal nations as full partners. At the WHTNC Obama appeared confident that he had achieved those goals. But while positive steps have certainly been taken in the last eight years, has the Obama administration really revolutionised Indian affairs in the United States? 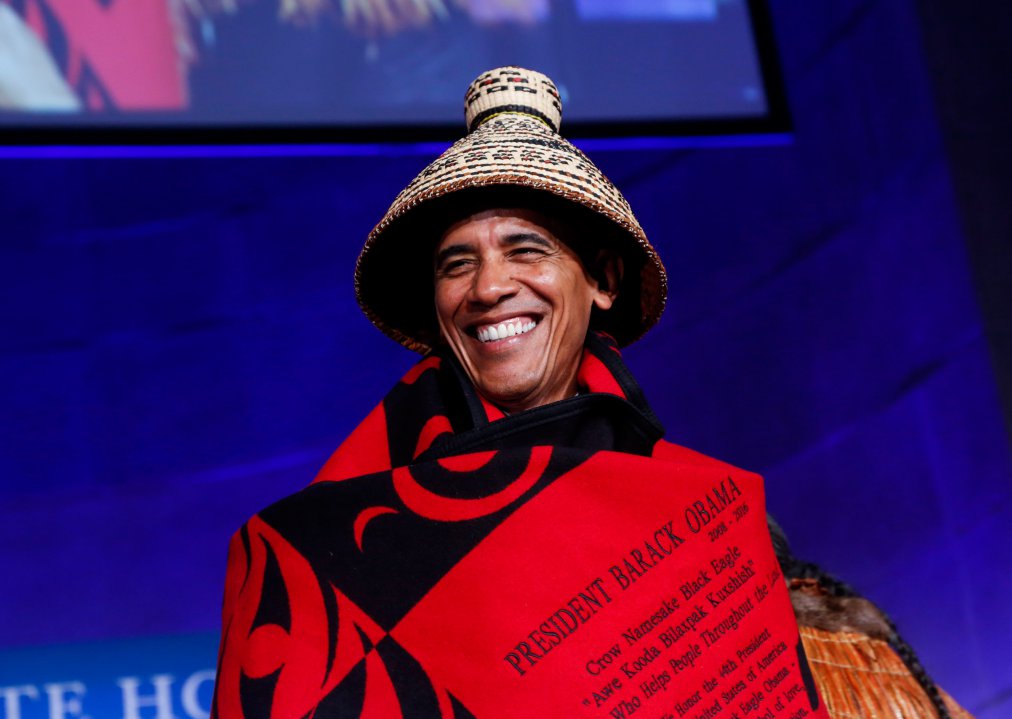 In conjunction with the WHTNC, the White House released a major plan of action entitled, “An All-of-Government Approach to Serving Indian Country”. The extensive thirty-eight point paper detailed past successes of the Obama Administration, as well as new commitments to various areas including Native youth opportunities, tribal sovereignty, health and environment, and Native American culture and heritage.[2] Amongst other initiatives, the plan lists millions of dollars of additional federal and third party funding for supporting Native Americans in technical career education, developing tribal clean energy programmes, and expanding high-speed internet access across Indian Country. The plan even includes steps toward transnational cooperation in addressing violence against indigenous women across North America, instigated by Obama’s summit with Canadian Prime Minister Justin Trudeau and President Enrique Peña of Mexico this past June. Undoubtedly, with Obama in the White House, the federal government has addressed a broad range of indigenous issues in the United States.

Whilst the White House has called this “historic progress”, the call for change in federal-tribal relations is not new. Rather, the Obama administration’s stated commitment to strengthening tribal sovereignty draws on rhetoric prevalent in federal Indian affairs since the 1970s. The 1975 Indian Self-Determination and Education Assistance Act already recognised that the federal government had, “denied to the Indian people an effective voice in the planning and implementation of programs for the benefit of Indians which are responsive to the true needs of Indian communities […].”[3] The Act allowed tribes to apply for contracts to administer programmes for their own communities, providing grants and technical support from federal officials. In practice, the Act had serious short-comings, with exhausted funding and complicated bureaucratic processes causing problems.[4] The nation-to-nation relationship championed by Obama demonstrates a more explicit rhetorical support of sovereignty than the 1975 Act, but some of the current administration’s Native policies have had similar short-comings – many tribes have struggled to implement provisions allowed by, for instance, the 2010 Tribal Law and Order Act (TLOA) without steady funding.

Moreover, much of the progress claimed by the White House, like the TLOA, has involved the reversal of past policies eroding indigenous rights rather than new steps toward securing sovereignty. The TLOA, which attempted to clarify the entanglements of tribal, state, and federal civil and criminal jurisdictions in Indian Country, in large part addressed problems caused by Public Law 280 (1953). Civil and criminal jurisdiction over reservation lands is usually shared by the federal government and tribes themselves, but PL 280 allows states to adopt jurisdiction over these lands. Tribal consent was not required until 1968, when PL 280 was amended by the Indian Civil Rights Act – notably, no tribe has consented since.

While the White House and some tribal leaders alike have lauded the 2010 TLOA, it has also been severely criticised for its inability to sufficiently protect American Indian and Alaska Native victims of rape. The 2013 Violence Against Women Reauthorization Act addressed some of these short-comings, allowing tribes to try non-Indian domestic abusers committing crimes on reservation lands, but jurisdictional issues remain a complicated minefield. As attorney Jasmine Owens has written, the TLOA has failed to properly engage police and prosecutors in these cases because it “cannot create an interest where one does not exist.”[5] 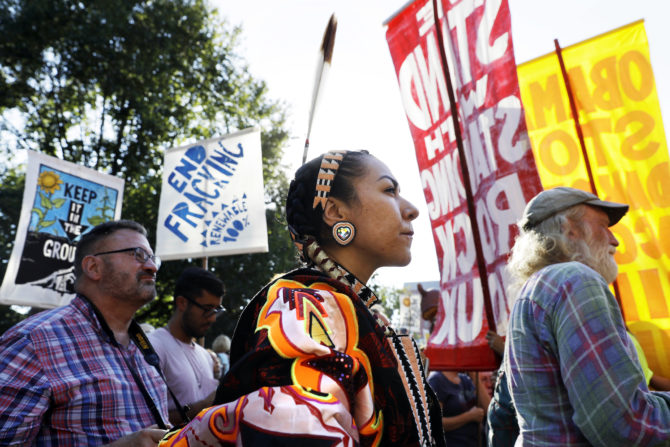 Owens’ comment speaks to a broader issue in the United States. Obama has toured reservations and vocally touted Native rights, but indigenous issues have gained little national attention. In 2010, Obama signed an Apology to Native Peoples of the United States into law – an opportunity which could have launched a broader national reconciliation effort.  However, the apology was passed as section 8113 under the 2010 Department of Defense Appropriations Act and went largely unnoticed. Furthermore, while declaring that the United States, “apologizes on behalf of the people of the United States to all native Peoples for the many instances of violence, maltreatment, and neglect inflicted on Native Peoples by citizens of the United States”, it also included the caveat that “nothing in this section (1) authorizes or supports any claims against the United States; or (2) serves as a settlement of any claim against the United States.” In visiting the Crow Agency during his 2008 presidential campaign Obama himself declared that the, “tragic history between the United States and tribal nations” must be acknowledged “if we are going to move forward in a fair and honest way.”[6] Particularly compared to the Truth and Reconciliation efforts ongoing in Canada, this ‘apology’ is far from a national recognition of historical wrongdoings.

An apology may seem like a minor shortcoming in light of the local and federal Native programmes put forward by the Obama Administration, but historical reconciliation is critical for instigating long-lasting change in the position of Native Americans in the United States.  The U.S. remains an inherently settler colonialist society, with indigenous peoples holding little political power, as the ongoing dispute over the Dakota Access Pipeline (DAPL) demonstrates. Native American groups and allies have united to oppose the construction of a crude oil pipeline across sacred sites of the Standing Rock Sioux Tribe, stating any leakage would severely damage the entire water supply of the tribe. Despite the Obama Administration’s request for a halt to construction in early September until the Army Corps could review the pipeline’s legality, Native protectors of the site reported that work continued on privately owned lands.[7] Less than two weeks later a federal appeals court passed a decision allowing construction, demonstrating the limitations to POTUS’ intervention.

The position of Native tribes as sovereign nations within the United States will not be secure without a better national understanding of this status and the rights that it entails. Without it, politicians and federal officials may return to adopting assimilationist policies. Just last year Rand Paul declared publicly that Native Americans, “don’t do very well because of their lack of assimilation.”[8] As laws like PL 280 show, it only takes one act to seriously erode the legal rights of Native nations, but several decades to slowly work towards rectifying problems. A new president could easily reverse the positive steps that have been taken under Obama. On paper Clinton and Trump appear to present opposite ends of the spectrum on Indian affairs: Clinton’s website states she is ,“committed to strengthening and building on the government-to-government relationship” while Trump has been known to question the legitimacy of Native American tribes by claiming they don’t “look Indian.”[9] Native Americans have in any case played little role in the campaign of either candidate and were not mentioned in either presidential or vice presidential debates. While the White House has clearly paid unprecedented attention to Native communities in the past eight years, in claiming he could ensure responsible management of Indian affairs “today, tomorrow and always”, Obama just promised too much.[10]

Reetta Humalajoki is an early career researcher who works on federal American Indian policy in the twentieth century, particularly focusing on the Termination period (1953-1970). She completed her PhD in 2016 and is currently revising her thesis for publication. Reetta teaches American history at Durham University and Newcastle University.
View all posts by Reetta Humalajoki →
Tagged  Native Americans, Obama, Politics.
Bookmark the permalink.