Home » Research » Culture » “In U.S. Cities or on Palestine’s Streets” – A Black-Palestinian Narration of Subaltern Geographies

“In U.S. Cities or on Palestine’s Streets” – A Black-Palestinian Narration of Subaltern Geographies 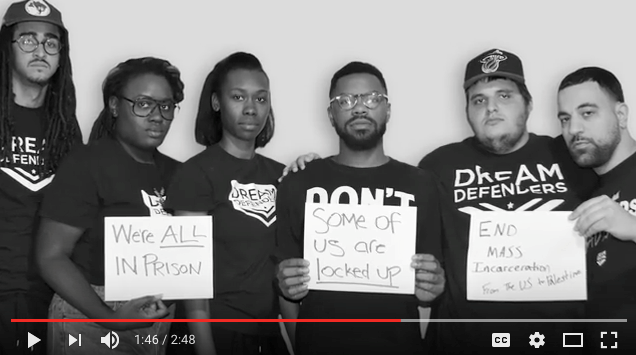 Still from, ‘When I See Them I See Us‘, Black-Palestinian Solidarity, 14 October 2015

In the audio-visual demonstration When I See Them I See Us, (2015)[1] various Black American and Palestinian individuals and organisations forming the Black-Palestinian Solidarity movement express their apprehension of both groups’ subalternity by linking and remapping experiences between “U.S. cities” and “Palestine’s streets”. Proclaiming that, “every 28 hours a black life is stolen by police or vigilantes in the U.S.,” while “every two hours, a Palestinian child was killed in Israel’s attack on Gaza last summer,” the video locates both groups’ suffering in the powerful hegemonic state apparatus of the United States and Israel. Alternating male and female voices identify Black and Palestinian victims:

The spoken words are underlined by a visual depiction of Black/Palestinian public figures holding placards that illustrate their encounters with violence, including, “They chocked me on video. I said I couldn’t breathe,” and, “They shot me in the chest. I was protesting war crimes in Gaza.” Collectively declaring “when I see them I see us,” the video humanises the victims and suggests an interchangeability in experience.

This audio-visual presentation is one of manifold protests among both groups, concurrently performed online and offline through social media, open letters, demonstrations on the streets, or the promotion of the Boycott, Divest, Sanction (BDS) movement against Israel. While contemporary solidarity has intensified since the Gaza-Ferguson moment in 2014, historically, Black American support for the Palestinian plight has chiefly been inspired by a simultaneous localization of Palestine and Black America as third-world localities struggling for liberation from imperialism and colonialism. The Asian-African Conference in Bandung, Indonesia in 1955 and reactions to following political evolvements, such as the Suez Crisis in 1956, revealed a transnational Afro-Arab connectivity, while the Student Nonviolent Coordinating Committee’s (SNCC) and the Black Panther Party’s investment in the Palestinian cause has highlighted the possibilities of Black-Palestinian agency.

The contemporary continuation of the historic dispossession of Black Americans and Palestinians is crucial to When I See Them I See Us, which suggests that the confluence of the Black and the Palestinian narrative results in a shared, interchangeable condition of suffering from state violence. The alternating voices attempt to grasp the maltreatment witnessed by both populations as “harassed, beaten, tortured, dehumanized, stopped and frisked, searched at checkpoints, administrative detention, [and] youth incarceration”. This is done whilst simultaneously displaying an image of a Black individual wearing a shirt that reads “Palestine” being arrested by U.S. law enforcement. This confusion is amplified by the unequivocal junction of geographic localities, when the crimes are positioned “from Rikers Island to Ofer Prison,” i.e. two systems of mass incarceration and symbols of both U.S. and Israeli supremacy and Black and Palestinian extradition. 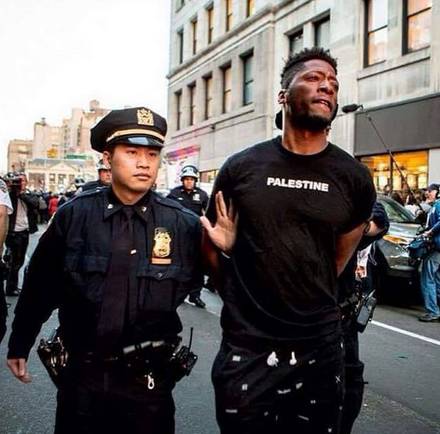 Image courtesy of Black for Palestine

Identifying mass incarceration and population containment as fundamental features of both the U.S. and the Israeli state coercion, When I See Them I See Us suggests that “we’re all in prison,” while “some of us are locked up”. This outlines the exclusion of Blacks and Palestinians and demonstrates the collective criminalisation they experience throughout different geographic spaces, eventually calling to “end mass incarceration from the US to Palestine.” The activists furthermore explain that they are labeled as “demographic threats” whose wombs are seen as dangerous and who are “sterilize[d] without [their] knowledge,” while their children are marked as criminal. Throughout the video, the protesters affirm their humanness, declaring “we have names and faces,” and asking to “remember them.” The process of dehumanisation in which “lives are being stolen” is countered through narrations of the individual victims’ traumata and tragedies.

The analogy of the variety of Black/Palestinian history enfolds through the construction of a transnational geography, in which places in the U.S. and in Palestine are delineated as wretched sites of colonial and/or imperial violence, adverting to the placing of Blacks/Palestinians as third-world populations in the shadows of the U.S.-Israeli empire:

They burned me alive in Jerusalem. They gunned me down in Chicago. They shot our water tanks in Hebron. They cut off our water in Detroit. They demolished our homes in the Naqab. They swallowed our homes in New Orleans.

Whereas the uniqueness of each struggle is acknowledged, the video postures both causes as a transnational suffering from (post-)colonial, imperial, and racist phenomena and their continuous reproduction. The subjugation of Palestinians and Black Americans as surplus populations that are being contained through military means is informed by Palestine’s functioning as a proxy colony and fragment for the U.S. empire. The interchangeability of both experiences appears as a result of U.S. imperial violence which connects domestic subjugation with its colonial extension. As Alex Lubin has argued, the “linkages between Israeli and US counterinsurgency technologies translate to a domestic US policing and incarceration infrastructure that increasingly looks like another front in the global war on terror.”[2] Consequently, both the so-called war on terror and the war on drugs are actions performed in a racist structure, perpetuating the subalternity of both Blacks and Palestinians. In his exhaustive analysis of Black-Palestinian histories, Keith Feldman argues:

…[t]he dominion of U.S. imperial culture produces and circulates knowledge to secure a purportedly stable opposition between the foreign and domestic that provides a symbolic architecture to secure consent for extraterritorial violence as essential for protecting the national home, even as the categories of foreign and domestic are persistently blurred and enfolded one into the other.[3]

The political and socio-economic proximity of the Palestinian and Black American miseries is mirrored in the remapping of the U.S. investment in international wars onto domestic localities. The extension of racist violence from the US to Palestine and from Israel to the US projects the Nakba back on U.S. soil. 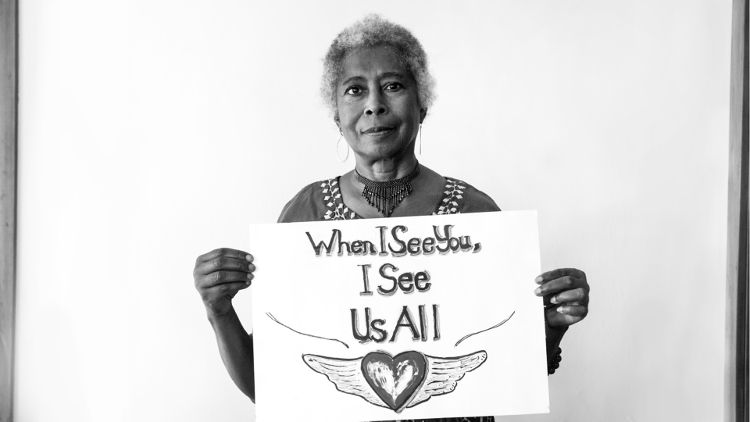 Closing image from, ‘When I See Them I See Us‘, Black-Palestinian Solidarity, 14 October 2015

While When I See Them I See Us appears as a Black-Palestinian self-manifestation and protest, it can also be discerned as a biography of Palestine. The combining of oral accounts with visual statements of spoken and written demonstration within a transmedia framework moves between cultural, political, social, and economic (auto)biographies of Palestinians and Blacks, social observation and human rights activism. Exposing the condition of their rights, the video presents the manifold familiarities with genocide, ethnic cleansing, apartheid, colonialism, and slavery as constitutive to the existence of Blacks and Palestinians.

The video ruptures limits of access to knowledge by creatively drawing the Black-Palestinian status quo and poetically expressing trauma through activism. Whereas the statements expressed in the narration resemble human rights reports published by, for example, Human Rights Watch or Amnesty International, the audio-visual dimension and the inclusion of famous academics, activists, and artist allows a dialogue with a broad audience, establishing possibilities to grasp the omnipresence of violence. Through the free syntactic structure of the lyrics, a Black-Palestinian counter imaginary is displayed in which the witnessing of cruel processes of subjugation is revealed as part of humanity. Joining decades of Black internationalist resistance, When I See Them I See Us inspires a contemporary participation in activism through online and offline spaces, directly endorsing BDS not only to show solidarity with Palestine, but also to resist the constant subjugation of Black America.

[2]Lubin, Alex. “The Disappearing Frontiers of US Homeland Security: Mapping the Transit of Security across the US and Israel.” Jadaliyya. Feb 26 2013 <http://www.jadaliyya.com/pages/index/10365/the-disappearing-frontiers-of-us-homeland-security > (accessed Feb 1, 2016).

[3] Feldman, Keith. A Shadow Over Palestine. The Imperial Life of Race in America.   Minneapolis: U of Minnesota Press, 2015: 8.

“Exceptional Zombie Cannibals” – Antonia Bird’s 'Ravenous' (1999) and the discourse of American exce...
Trump and the Republican Party—Precessors and Limits
War Among All Puerto Ricans: The Nationalist Revolt and the Creation of the Estado Libre Asociado of...
Book review: Blue Collar Broadway: The Craft Industry of American Theater by Timothy R. White
Review of 25th Annual Conference of American Literature Association 2014
#Bookhour: LET ME BE FRANK WITH YOU by Richard Ford
Generation Indigenous (Gen-I): Removing the Barriers to Success
Keynote Competition 2018