Home » Skills development » Awards » In The Fields Of Democracy: The Midwest In World War I

In The Fields Of Democracy: The Midwest In World War I

The article below is an abridged version of David Rennie’s winning entry to the Postgraduate BAAS essay prize, 2016. The full version is published in the Society for the Study of Midwestern Literature‘s journal, Midwestern Miscellany.

World War I generated a new narrative in American national identity. The easterly crusade to save the Old World, or, in President Wilson’s words, to make the world ‘safe for democracy’, reversed the nation’s foundational movement of western exploration and settlement leading away from Europe.[i] As Joseph Urgo describes it, ‘[t]he close of the old frontier’ was followed by ‘the opening of the global imperial frontier’, inaugurating America’s status as a superpower.[ii]

Once in France, many soldiers were struck by the incongruous resemblance the French countryside bore to the landscapes they had left behind. John Lewis Barkley’s impression of the country was of how ‘that glimpse of land had looked like home’ in Missouri.[iii] The eponymous private in James Stevens’s Mattock remarks how ‘the land stretched away level and flat, much like the country back in good old Kansas’.[iv] Passages like this, which emphasize similarity between the French landscape and the rural topography of soldiers’ homes thousands of miles away, are a recurrent feature of Midwestern World War I novels. Further complicating this evocation, the Midwestern landscape was also present, in a sense, in terms of the massive agricultural contribution Midwestern farmers made to the Allied war effort. Novels such as Willa Cather’s One of Ours and Sinclair Lewis’s Main Street, as well as journalism and propaganda posters, represented the Midwest’s agricultural role in the European war.

The Midwestern experience of World War I, then, dovetails reciprocating continuities running from west to east – in which home front agricultural production and food conservation support the “off stage” war effort in Europe – and from east to west – in which soldiers are struck by the similarity between the Old World and the one they have left behind in the Midwest. We might think of these reciprocities as the inverse of what Paul Fussell terms the ‘ridiculous proximity’ of the British front line to ‘home’.[v] The trenches of the Western Front were just seventy miles from London, close enough for perishable goods and newspapers, only a day old, to reach them. The Midwest may have been thousands of miles away from the actual fighting, but, as with Fussell’s examples, elements of “home” and “the front” overlapped and intersected with each. 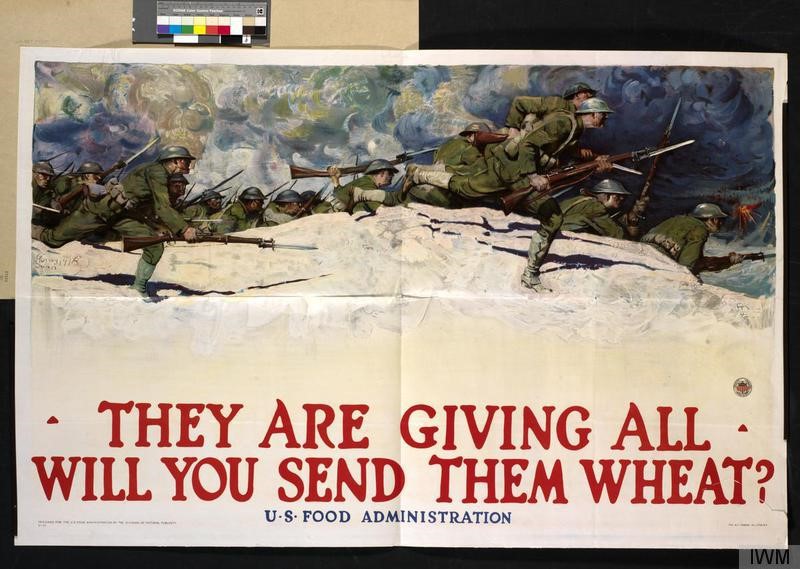 The landscape of the Midwest has played a central role in the formation of American national identity. As William Barillas writes, it was the ‘wild, undeveloped expanses’ of the New World hinterland ‘that distinguished the young nation from Europe’.[vi] Meanwhile, according to Frederick Jackson Turner, it was the ‘expansion westward’ into those territories that ‘furnish[ed] the forces dominating American character’.[vii] Conceived as a rural and egalitarian region, differentiated from the urban East and the western wilderness, the Middle West, by 1912, ‘came to symbolize the nation, to be seen as the most American part of America’.[viii] In addition to doubling back on America’s foundational move to the west, the movement of Americans between the New and Old Worlds during and after World War I was complicated by the development and redeployment of other cultural conceptions that had specifically Midwestern resonances. Throughout World War I, the concept of the Midwest as the democratic heartland of America was employed in the rhetoric of the nation’s war effort. In a related sense, exhortations to expand home front production also tapped into this image.

Although World War I represented a ‘new myth of American destiny’ following the close of the frontier, the concept of the Midwest as the democratic, pastoral heartland of America had by no means expired in the eyes of some commentators.[ix] In The Valley of Democracy (1918), Meredith Nicholson writes that the ‘Middle Western Pioneers were in every sense the fullest sons of democracy’.[x] Nicholson makes it clear that the efficacy of the American fighting force, and the values it defends, were generated in the American heartland, claiming that ‘if the Kaiser had known the spirit in which these august fields were tamed and peopled [. . .] he would not have so contemptuously courted our participation against him in his war for world-domination’.[xi] Frederick Jackson Turner voiced similar sentiments, describing domestic war efforts and institutions such as the Red Cross and the Y.M.C.A. ‘as an inspiring prophecy of the revival of the old pioneer conception of the obligations and opportunities of neighborliness, broadening to a national and even to an international scope’.[xii] The expressions of Nicholson and Turner, then, frame the new era of American identity, as the savior of democracy on the international stage, as a continuation of, and not a replacement for, pioneer ideals.

This sense of ideological continuity can also be found in the rhetoric surrounding America’s agricultural contribution to World War I. During the war, increased demand from Britain, Italy, and France strained American supply and raised domestic food prices. When America joined the war in April 1917, ensuring a continuous wheat supply to the Allies became an imperative. Consistently the most productive agricultural region in America, the Midwest was the site of much of this increased farming.[xiii] In One of Ours (1922), Claude’s father enters into the war spirit, leading a plough team himself in the belief that ‘[w]hatever happened on the other side of the world, they would need bread’.[xiv] In Sinclair Lewis’s Main Street (1920), while the sons of the town’s businessmen are drafted into the army, Gopher Prairie is described as ‘booming, as a result of the war price of wheat’.[xv] In The Valley of Democracy (1918), Nicholson also took a patriotic stance that paralleled America’s military and agricultural contributions: ‘The farmer himself is roused to a new consciousness of his importance [. . .] every acre of his soil and every ear of corn and bushel of wheat in his bins or in process of cultivation has become a factor in the gigantic struggle to preserve and widen the dominion of democracy’.[xvi]

Repeatedly American war propaganda called for greater production by farmers and conservation by households by paralleling these domestic efforts with the Allied military campaign. The image of a US thresher knocking the Kaiser over the head with a club was printed in the May 1918 issue of Farm Implement News above the caption ‘Competent Threshing Here Will Hasten the Thrashing Over There’.[xvii] One poster issued by the US Food Administration shows soldiers charging into battle above the enjoinder ‘THEY ARE GIVING ALL – WILL YOU SEND THEM WHEAT?’ This image is emblematic of the continuity between the home and military fronts that we see, in an ideological sense, in the rhetoric of Nicholson and Turner, and in the agricultural activity recorded in the writing of Cather, Lewis, and Harger. Home front activity was undertaken in service of a military effort from which it was divorced geographically, but linked to ideologically in visual propaganda and songs like George M. Cohan’s ‘Over There’. Therefore, literary descriptions of Midwestern soldiers “gazing homeward” as they find the French landscape reminiscent of their own are by no means one-sided. Propaganda and literature testify that imaginative projections going in the other direction, from U.S. soil to the European theater of war, reciprocated the topographical similarities identified by soldiers.

With thanks to the Society of the Study of Midwestern Literature for their permission to publish this article.

“Money, That’s What I Want”: Who Benefitted from the Crossover of African American Musicians in the ...
There's No Place like Home: Hillary Clinton and Donald Trump Conquered New York
Application Advice: Eccles Centre European Postgraduate Award
Deconstructing ‘Uncle Tom’ Abroad: The Case of an American President
60 Seconds With Zalfa Feghali
Fear Itself: Reflections on Native America and the Narrative of Fear
“Heeere’s Johnny!”…Again…and Again…: Pluto TV and the Continued Presence of Johnny Carson’s Tonight ...
Assassination Nation, Young Female Anger and Futurity in the Wake of Trump’s America

David Rennie is a final-year PhD student at Aberdeen University. His work has appeared in MidAmerica, and a special edition of Midwestern Miscellany on World War I that he guest-edited for the Society for the Study of Midwestern Literature. He won the British Association of American Studies Postgraduate Essay Award (2016), and has forthcoming essays in The F. Scott Fitzgerald Review and The Hemingway Review.
View all posts by David Rennie →
Tagged  C20, Midwest, National Identity, War.
Bookmark the permalink.