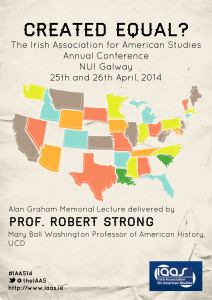 The founding rhetoric of the United States places the country in a difficult position when attempting to live up to its lofty aspirations. From slavery – the nation’s original sin – to civil rights and income inequality, the U.S. has struggled for centuries to make good on its promise to secure certain unalienable rights for all of its citizens. The annual IAAS conference held in Galway considered these issues, as a lively debate filled rooms adjacent to the Hardiman Research Library and spilled out into the restaurants and pubs of Galway City. Presentations were not limited to the United States. Talks also ranged from border studies to transatlanticism, but as the conference marked the fiftieth anniversary of the Civil Rights Act, passed by Congress and signed by President Lyndon B. Johnson on July 2, 1964, the U.S. accounted for most of the weekend’s investigations.

Dr. Enrico Dal Lago of NUIG’s History Department opened the conference fittingly with a brief paper on the role of William Lloyd Garrison in the construction of what Dal Lago referred to as an ‘anti-slavery wall.’ This concise and effective talk contextualized the transatlantic study of the United States’ problems with equality and chronicled the struggle to make Euro-American democratic republics the norm around the world. The Irish connection was reinforced by mention of Daniel O’Connell as another committed abolitionist alongside Garrison.

In the first panel I attended, Dr. Adam Kelly from the University of York presented ‘Capitalism, Abstraction, and Inequality: Dave Eggers’s You Shall Know Our Velocity,’ which was one of the standout papers in extraordinarily strong conference proceedings. Kelly used Eggers’s work to narrate the rise of inequality in 20th century U.S. culture and its representations in fiction. He quoted poignantly Eggers’s line, ‘We’ve chosen money as our language, and I don’t know if it was the right one.’ At a conference largely invested in issues of racial equality, this paper set an appropriate tone by highlighting systemic bias based on the neoliberal economics and politics that perpetuate inequality regardless of skin colour. 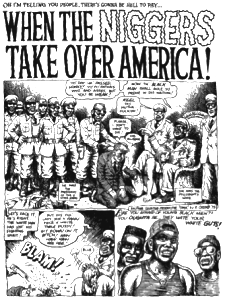 Steve Ellerhoff of Trinity College Dublin made an impressive contribution to this panel with his paper, ‘William F. Buckley, Jr. Didn’t Get It: Paranoia of Equality in Kurt Vonnegut, Jr.’s Harrison Bergeron.’ In one of the most striking images of the weekend, Ellerhoff displayed shockingly ironic, grotesque cartoons by Robert Crumb to reinforce his thesis. Along with Clair Sheehan’s paper on inequality in John Updike’s America, this opening panel set the conference on an excellent start.

Later that afternoon, Kate Smyth of TCD gave an insightful reading of beauty as a social construction in Toni Morrison’s fiction. A short-fiction writer herself, Smyth ably analyzed how black female character’s in Morrison’s work feel compelled to make themselves appear ever-whiter, constantly deferring to the dominant view that light skin, straight hair, and blue eyes are marks of beauty, while blackness must be erased or overcome. In the discussion following her talk, Smyth opened a YouTube video that featured actress and model Lupita Nyong’o making an emotionally articulate speech on owning blackness as true beauty (posted below). Beside Ruben Peinado Abarrio’s paper on representations of slavery in the films Django Unchained and 12 Years a Slave, this panel connected historical concerns with popular contemporary representation, reminding the conference that issues of equality become no more manageable with time.

The highlight of the conference came that evening, in the Alan Graham Memorial Lecture delivered by Professor Robert Strong of Washington & Lee University. Professor Strong is currently a Fulbright Scholar working in the Clinton Institute for American Studies at University College Dublin. His talk, ‘Politics and Principle: Jimmy Carter in the Civil Rights Era,’ took a unique approach by looking at the biography of a politician associated more with human rights activism than civil rights leadership as a context for exploring the advancement of civil rights from the 1940s through the ’70s. Strong’s intelligent, insightful, entertaining, and extremely well-informed lecture gave conference delegates an example of world-class scholarship, while Professor Strong himself made valuable contributions to other panel discussions throughout the weekend. It is admirable to see a keynote speaker so invested and interested in the general proceedings of the conference.

On the second day of proceedings, a panel on ‘Writing a New Democracy’ drew a smaller crowd but was effective in investigating different modes of writing and their representations of inequality. Dr. Christopher G. Diller of Berry College examined the work of Harriet Beecher Stowe and her lesser-known grandnephew, the poet John Beecher. The latter was a protest poet actively involved in the Civil Rights movement and was actually raised in Birmingham, Alabama. I doubt anyone in the audience was familiar with John Beecher’s work, so the recordings provided by Dr. Diller were illustrative and intriguing. Dr. Alex Runchman of TCD gave a reading of Albery Allson Whitman’s ‘Twasinta’s Seminoles,’ which provoked thought toward the Native Americans and the egregious affronts to their rights and equality. Dr. Runchman is at work on a revisionary history of nineteenth-century U.S. poetry. This talk gave IAAS poetry scholars an exciting early look at that material.

My own paper helped close the conference, and I was privileged to speak beside Sophie Spieler of the Free University Berlin. Her paper, ‘The Chosen and Their Gatekeepers: Elite Education in Contemporary American Literature,’ combined with my own on integration at Black Mountain College to investigate types of equality (or inequality) in higher education. This was remarkably fitting for an ending as we looked out the window over the beautiful grounds of NUI Galway and considered our own privileged positions in the halls of academia.

Conferences with specific themes can suffer from repetition, but the IAAS annual conference persisted in original thinking, valuable and creative research, and remarkable quality. I heard almost nothing negative about the proceedings and felt, from my own vantage, that so many issues of inequality – whether to do with race, gender, economy, or education – were discussed with such fine presentations that delegates left the conference invigorated, not wearied.

The conference proved that the state of American Studies in Ireland is strong and growing stronger. We owe a great deal of gratitude to organizer Rosemary Gallagher of NUIG and all the others who helped make the IAAS conference such a resounding success. In the end, it was decided that next year’s conference is to be held on the east coast of the country, at Trinity College Dublin. With little to be improved upon, I am sure that delegates look forward to another rousing selection of papers and to continuing excellence in American Studies in Ireland.

Book Review: The Republican Party and the War on Poverty: 1964-1981 by Mark McLay
Review of Celebrity Encounters: Transatlantic Fame in Nineteenth-Century Britain and America Confere...
Patient Zero and the Making of the AIDS Epidemic by Richard A. McKay
Book Review: The Maximalist Novel: From Thomas Pynchon’s Gravity’s Rainbow to Roberto Bolaño’s 2666 ...
Book Review: Stars, Fans and Consumption in the 1950s: Reading Photoplay by Sumiko Higashi
Review: Joint BrANCH and HOTCUS Annual Conference
Conference Review: ‘Women’s Transatlantic Prison Activism since 1960,’ the Rothermere American Insti...
Review: ‘The “Not Yet” of the Nineteenth-Century U.S.’, BrANCA Symposium

Jonathan C. Creasy was raised in Los Angeles, where he studied music with jazz legends Peter Erskine and Charlie Haden and attended California Institute of the Arts (CalArts). In 2011 he graduated from Trinity College Dublin, where he is now a PhD researcher in the School of English. His thesis explores poetics and pedagogy at Black Mountain College, specifically in relation to the works of Charles Olson, John Cage, and Robert Creeley. Jonathan has served as Editor-in-Chief of Trinity’s peer-reviewed Journal of Postgraduate Research. He is also co-founder, editor, and publisher of New Dublin Press. Find out more at www.jcreasy.com.
View all posts by Jonathan Creasy →
Bookmark the permalink.