This blog series focused on American women writers, a partnership between The Society for the Study of American Women Writers and U.S. Studies Online, explores the field through several lenses that range from recovery to religion and from war to transnationalism. By no means comprehensive in scope, this series of nine posts by SSAWW members offers snapshots into the field and its on-going conversations. Rachel Griffis, in the fourth post of the series, connects white nineteenth-century American women writers with contemporary white Christian feminism.

Emily Dickinson’s irreverent statement, “Consider the lilies—is the only commandment I ever obeyed,” functions as the epigraph of one of the most recent popular books on Christian feminism, A Year of Biblical Womanhood (2012), written by blogger Rachel Held Evans. Although Dickinson makes no other appearances in the book, her presence at the beginning of this timely cultural work demonstrates a rhetorical technique contemporary white Christian women writers are using in order to make feminism more acceptable to their skeptical communities: appeals to the ethos of the nineteenth-century in America. This rhetorical technique not only reveals Christian feminists’ positive perceptions of nineteenth-century individuals and social movements, but evinces their discomfort with their more recent, twentieth-century foremothers.

Feminism was and continues to be both a vital and contentious topic in mainstream Christianity. While Christians have long been interested in whether their religious tradition and feminism are compatible (the magazine devoted to exploring these issues, Daughters of Sarah, started in 1975), the general attitude of mainstream evangelical Christians in the last several decades towards feminism is predominantly defensive.

In 1987, this defensive stance propelled a group of popular Christian leaders to create The Danver’s Statement, which was written partly in response to “the promotion of feminist egalitarianism” among Christians, and which essentially asserts that Christianity and feminism are incompatible. However, in the last several years, there are many figures who self-identify as both Christian and feminist and who moreover appear to have had an enormous influence among Christians of all kinds: low-church, high-church, former fundamentalists, and the popularly-termed liberal Christians, the sort who started publications like Daughters of Sarah.

For example, Texas-educated Canadian Sarah Bessey, who wrote the provocatively-titled Jesus Feminist (2013), has enjoyed endorsements from people as diverse as the progressive Emerging Church leader Tony Jones and conservative evangelical pastor’s wife Jen Hatmaker, who is the mother of seven and author of several popular women’s Bible studies. How did Bessey arrive at this puzzling rhetorical location, embracing what The Danver’s Statement disparaged as “feminist egalitarianism” and yet accepted by contemporary women, such as Hatmaker, who are arguably its heirs? 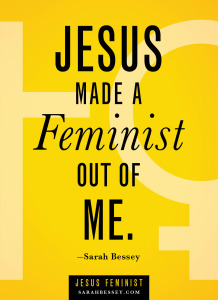 Though there are a number of factors that contribute to a certain cultural argument’s acceptance at a particular place and time, Bessey’s success, at least in part, seems to be based on her expressions of solidarity with nineteenth-century American women and her subtle, but clear, distancing from second-wave feminists like Betty Friedan. The title of her article, “Reclaiming Feminist,” published prior to the release of her book, speaks to her use of the nineteenth century rather than the more recent past—namely the 1960s—to bolster her claim that Christianity and feminism are not mutually exclusive. She informs her readers that “feminism’s roots are tangled up with the strong Christian women’s commitments to the temperance movement, women’s rights to personhood under the law, suffragist movements, and—in America and England in particular—the abolitionist movements of the nineteenth century.” She is careful to note, however, both online and in print, that “Christian feminism predates” the voices of twentieth-century feminists Betty Friedan, Simone de Beauvoir, and Gloria Steinem, figures whom mainstream evangelicals routinely dismiss as espousing ideas antithetical to Christianity.

In an article published in Christianity Today that functioned as a precursor to the release of Bessey’s book, Laura Turner also garners support for Christian feminism by reaching into the past while distancing herself from the 1960s. “The word feminist,” she writes, “for some, still conjures up images of second-wave bra-burners and radical leftist politics, forgetting entirely about women like Anne Hutchison and Elizabeth Cady Stanton.” Like Bessey, Turner does not disparage twentieth-century feminists, yet her need to distinguish herself from them betrays her belief that current-day Christians are more likely to accept a nineteenth-century activist than Betty Friedan as their ancestor.

Even Christian writers who are willing to express solidarity with Friedan feel the need to qualify their solidarity. For example, Amy Lepine Peterson, in an article that appeared in Christ and Pop Culture, “The F-Word: Why Feminism Is Not the Enemy,” introduces The Feminine Mystique with the caveat that she “disagree[s] with quite a few of [the book’s] conclusions.” When she mentions the “much older” feminists with whom she grew up, including the nineteenth-century literary character Jo March of Little Women, Peterson inserts no qualifiers and states that for these women, “feminism simply meant getting equal educational opportunities, the right to vote, to have a job, and to own property.” Peterson’s less labored description of the “much older” feminists who had “simpl[e]” goals indicates that they are much less threatening to her audience than Friedan and others associated with second-wave feminism.

Ironically, Friedan herself included in The Feminine Mystique (1963) a chapter on feminism’s legacy, championing the same women whom contemporary Christian feminists claim as their forebears: Elizabeth Cady Stanton, Susan B. Anthony, and Lucy Stone, among others. This enigma, that Christian feminists acknowledge the same ancestry as Betty Friedan, the very woman of whom they are wary, points to Christian women’s trust in the social movements, and in the ethos, of the nineteenth century. As a result, Emily Dickinson, who often expressed heterodox beliefs, is still a safer choice for an epigraph than Gloria Steinem.

Adolf von Harnack, one of the teachers of the Christian theologian and martyr Dietrich Bonhoeffer, wrote in the 1920s, “the sons are even more hostile to their fathers than their grandfathers.” Similarly, contemporary Christian feminists see great differences between their mothers and grandmothers. Though current Christian women may exacerbate these differences for the sake of their own arguments, the writers with whom they align themselves, as well as the ways in which they use them, offer insights into the values of contemporary Christian communities. Furthermore, the presence of white nineteenth-century women writers in recent discussions about Christian feminism highlights aspects of their work and lives that have been overlooked, but are indeed significant for a comprehensive understanding of the women’s movement in America.

U.S. Television, Nostalgia and Identity - Editorial
Storify of #bookhour chat on GOLD FAME CITRUS by Claire Vaye Watkins
Results and Fallout from Super Tuesday and Super Saturday
Hollywood in the Age of Trump: USSO Special Series
Storify of our #bookhour twitter chat on GOD HELP THE CHILD by Toni Morrison
The Indentured Atlantic: Bound Servitude and the Literature of American Colonization (Part Three)
Counterpublics and the New Dynamics of Contemporary Conservatism: From the Tea Party to the Trump Mo...
60 Seconds With Zalfa Feghali

About Rachel B. Griffis

Rachel B. Griffis is a doctoral candidate in English at Baylor University, where she teaches writing and literature. Her major area of study is nineteenth-century American literature.
View all posts by Rachel B. Griffis →
Tagged  C19, C20, C21, Gender and Sexuality, Politics, Religion, Women's Writing.
Bookmark the permalink.