How American Commentators Commit Violence Against the Middle East 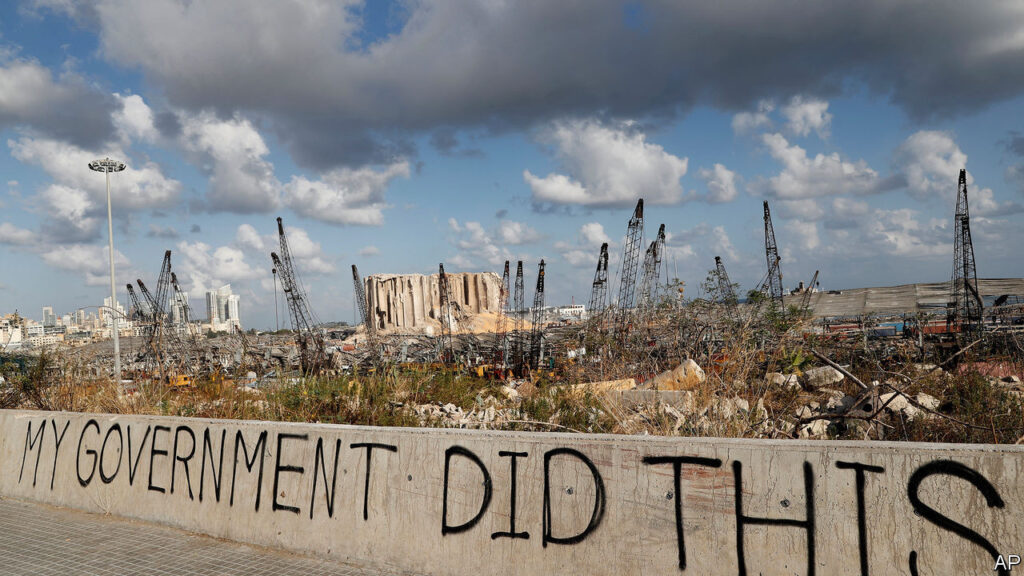 When I wrote to a leading US newspaper to propose a dismayed response to Thomas Friedman’s column for the New York Times, “Beirut’s Blast is a Warning for America,” I received a deeply unsettling response.

“We have a lot of pieces in the queue at the moment, and with the conventions coming
up readers aren’t likely to be thinking about Beirut, unfortunately. Please don’t hesitate
to send us more pitches in the future, especially if you have a piece in mind that would
connect nicely with the news cycle.”

I had written on August 13th, just nine days after a catastrophic explosion rocked the Lebanese capital, and four days after Friedman presented his cautionary tale to the American public. But the news cycle, the editor told me, had moved on. ‘People’ were not thinking about the nearly two-hundred dead and hundreds of thousands displaced, whose hope of a good life evaporated together with their apartments.

I sat with the response for a few days, baffled and angry and also hurt, before eventually sharing it with my colleagues at the American University of Beirut. No one was surprised. I moved to Beirut in August 2019 to teach American Studies and Media Studies, and the subsequent year proved to be an experiential crash course in Lebanese politics. Before it all culminated in what neatly became hashtagged internationally as the #BeirutBlast, with thoughts and prayers appended to it as with any disaster, there were other disasters. A catastrophic financial crash, increased electricity cuts, a collapsing health care infrastructure, environmental devastation, and the violent repression of large-scale protests against the corruption that engendered all of these. Flickers of these appeared in international media, but all with an expiration date—this was nowhere more glaringly obvious than in Twitter’s move of retiring the heart-shaped Lebanese flag emoji a mere three weeks after the disaster.

The editor’s reply emblematizes a pervasive strain of discursive violence against the Middle East in western—and especially US— media, trafficking, as it does, in orientalist, racist, and outdated modes of thinking about the region by disseminating incomplete or decontextualized representations of it alongside more overtly racist content. The Beirut blast prompted both kinds of content. In Friedman’s case, the issue is an erasure of geopolitical history. In his column, Friedman laments that in the US, following Lebanon and other Middle Eastern countries, “everything has become political,” from the weather to face masks. Friedman uses this as an analogy for the current U.S. political landscape, predicting an election season that will further show the absolute cleavage between right and left. What Friedman ignores, however, is that in many of the countries that he presents as cautionary tales, social upheaval is not simply the result of domestic discord between “rival tribes.” Not factionalism, but US military intervention destroyed Iraq. Libya and Syria did not fall victim to what Friedman calls a politicized or factional “kind of thinking,” but are in the midst of violent proxy wars that have seen material involvement from Russia, Turkey, the US, the EU, Iran, and now Gulf States.

The US has also continued to financially support the corrupt Lebanese regime whose criminal negligence blew up the city and the dreams of millions within it. These are not merely ideological or domestic disputes. These are real and global conflicts, with inconceivable human and material costs. Without any of this geopolitical and historical context, Friedman’s argument rings hollow. On the sleazier end of the spectrum, for the NYPost, Jonathan Tobin—who as the editor of the Jewish News Syndicate can by no stretch of the imagination be deemed an impartial observer—also directly linked the Beirut explosion to American geopolitical policy. “Lebanon Proves President Trump Right on the Middle East,” Tobin’s headline provoked. Tobin calls Lebanon “a breeding ground for terrorism,” and states that the U.S. and Israel need to avoid a repetition of past errors by being “dragged into” a Lebanese conflict again. Tobin conveniently ignores that Israel has itself been an aggressor, most recently in 2006 when it bombed civilian infrastructure in Beirut after a border dispute with Hezbollah. Even today, the sky constantly rumbles with Israeli reconnaissance drones and fighter jets en route to Syria—a consistent invasion of territorial sovereignty.

Both Tobin and Friedman perpetuate stereotypes of Lebanon and the Middle East at large as violent, terrorist territory, albeit at wildly different registers. From Edward Said to Jasbir Puar and Evelyn Alsultany, scholars have persuasively outlined how such discursive biases constitute a form of violence and can lead to further military intervention. Alsultany, for example, shows how post-9/11 representations designates some Arabs and Muslims as “worthy of feeling,” with an “excess of affect” for women and children versus the “regulating of sympathy” for men (16). This logic helped justify the War on Terror as a liberatory enterprise to free women from the yoke of Muslim patriarchy at home while simultaneously combating terrorism globally. News publications here work hand-in-hand with fictional representations. When I watched the first two episodes of Amazon’s television show Jack Ryan (2018) with my Intro to American Studies class at the American University of Beirut, in which a Lebanese terrorist massacres a Parisian catholic congregation with sarin gas before attempting to mastermind an ebola outbreak in the U.S, my students quickly picked up on the representational flaws. The characters speak the wrong Arabic dialect, Lebanon is far from a desert (filming took place in Morocco even though, narratively, the show is set in the Beqaa Valley that joins Lebanon and Syria), and the stereotype of the terrorist is tiresome. Yet this is par for the course.

The injury of these one-dimensional portrayals—circulated widely due to the reach of the publications— is compounded by the fact that there is simply no window for counternarratives in mainstream US media, except for the ones that blame Lebanon for its own misfortune or that foreground pain and suffering resulting from the unimaginable violence befalling the region. I use the passive voice here purposefully. In most US narratives, there is zero sense of American complicity in the tumult shaping the region. Parallel to this, there is little effort to acknowledge the Lebanese as architects of their own fate instead of victims or anything but hostages to an Iranian-backed terrorist organization. Indeed, the blast was quickly followed by attempts to influence the shape of the post-disaster Lebanese government, when the U.S. stated it was exploring options to sanction Hezbollah and make aid contingent on its exclusion from Lebanese politics. Lebanon and the Lebanese have no agency, no material existence beyond their suffering in these narratives. They exist to justify American geopolitics.

This is not to say that these narratives of pain should not circulate; I was moved beyond words by Seema Jilani’s essay for The New York Review of Books, in which she describes in prose so impossibly beautiful it is painful to read the horrific aftermath of the explosions, including her own four-year-old daughter’s gruesome injuries. It may not be very scholarly to say, but I cried every day reading about the people whose lives were stolen while watching, on repeat, videos of the blast, trying to make sense of something that exceeds the bounds of comprehension. In this way, I am somewhat sympathetic to Friedman and others—there are simply no words that could ever capture the magnitude of the blast and what followed it, something that essays by Lebanese writers such as Sara Mourad and Lina Mounzer chronicling the blast thoughtfully foregrounded. There is no register in any language that could do justice to the heartbreak, the fury, the exasperation, and the commitment that came after. But even if words that are found will never be the right ones, there are wrong ones; or, at the very least, words that erase or omit crucial context to obscure complicity. And those words are inexcusable.

At the Beirut port, a road barrier frames the view of the destruction. On the concrete siding, someone spray painted MY GOVERNMENT DID THIS. And it did, undeniably. Ultimately, only the Lebanese regime is to blame for the events of August 4. But it was aided and abetted by international partners that propped it up, funded it, and helped it cling to power even in the face of popular resistance for their own geopolitical interests. The U.S. funds the Lebanese Army. The World Bank is funding a controversial dam in the Bisri Valley, a move widely opposed by environmentalists for the devastating effects it will have on the native ecosystems. Representation might not be the crux of the problem, but if international partners truly want to help in rebuilding the city, as they state, they first need to fully understand the scope of the problem, a process that inevitably entails going beyond mainstream media and onto the ground to listen to the voices of the people themselves. For example, Zahra Hankir, a Lebanese journalist and editor of the luminous collection Our Women on the Ground, is interviewing affected Beirut residents in Karantina, one of the city’s poorest neighborhoods. Instead of clickbait and decontextualized quotes, she transcribes their testimonies in full. On Medium, of course — the mainstream news cycle has inexcusably moved on.

In Memoriam: Legendary Civil Rights Activist Julian Bond
Conference Review: APG/BAAS Annual US Politics Colloquium
Book Review: Rhetoric of Modern Death in American Living Dead Films by Outi Hakola
‘Can the Subaltern Play?’ Jazz as Voice in Boston, Massachusetts circa 1910 – 1949
The Manhattan Male in “Grit Lit” and Film from the 1970s to the 1990s
Tim Galsworthy on the 2021 BAAS Peter Parish Award
The Praying Indians of King Philip’s War
Book Review: “America in Afghanistan: Foreign Policy and Decision Making from Bush to Obama to Trump...