On September 9th 2016, Northumbria University hosted the annual Postgraduate Conference for Historians of the Twentieth-Century United States (HOTCUS), around the theme of ‘Winning Minds and Hearts: Constructing National Identity in US History.’ With traditional academic panels, developmental roundtables, and a fascinating keynote from Professor Simon Hall, it proved to be a day of significant discussion and debate, bringing together postgraduates from across the United Kingdom and beyond. The conference explored the constructions and limitations of American national identity in the twentieth century, covering topics such as race, ageism, citizenship, memorialization, patriotism and protest. As the conference organizer, I was keen to document these discussions in a more detailed manner than the usual conference review process, and so I invited delegates to review individual panels in the hope of better continuing the day’s conversations and debates.

It is therefore my pleasure to introduce a series of five USSO posts, each written by a conference attendee and covering a different panel. These reviews will help to disseminate the day’s ideas and issues to the widest possible audience, including those unable to attend the conference. Speakers have been given the opportunity to then reply to these reviews, enabling them to discuss their research in more detail and respond to any questions. The first post we’re publishing is Dr. Jon Coburn’s review of Professor Hall’s keynote on Leonard Matlovich, a distinguished military hero whose admission of homosexuality signalled a significant turning point for the gay liberation movement in the 1970s.

It is, perhaps, unsurprising that the question of national identity raised by the 2016 HOTCUS Postgraduate Conference provoked a number of discussions relating to patriotism, militarism, and respectability. From the experience of African-American soldiers during World War II to 1960s antiwar protest and contemporary annihilation fantasies, conference papers showed that acceptable displays of American national identity have historically necessitated support for the military and reinforcement of societal norms. Anyone operating beyond these boundaries runs the risk of appearing “un-American”. Professor Simon Hall’s keynote lecture on the complex identity of military hero and gay rights icon Leonard Matlovich therefore provided a perfect coda to the day’s themes.

Matlovich served as a Technical Sergeant in the US military for twelve years, building a distinguished career. He served three tours of duty in Vietnam, won an Air Force Commendation in 1966, the Purple Heart in 1970, and the Bronze Star. Following his active duty, Matlovich became a respected race relations officer within the military and often coached other Air Force instructors. His exemplary record won praise and respect from superior officers. Having hidden his sexuality for the duration of his service, Matlovich publicly declared his homosexuality in 1975, prepared to fight against a ban on gay service in the military. Upon receiving this ‘coming out letter’, Matlovich’s commanding officer asked, ‘What does this mean?’ Matlovich famously retorted, “It means Brown vs. the Board of Education.” 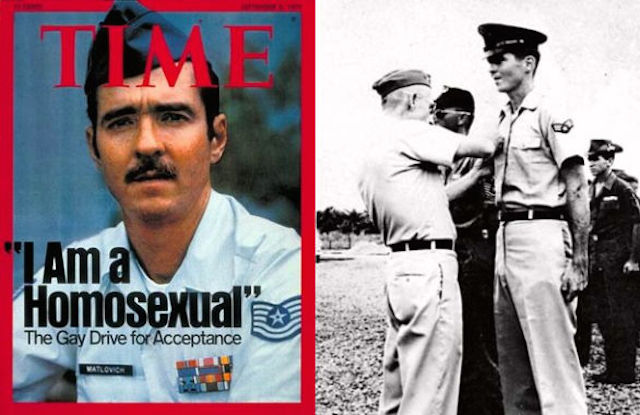 Hall explained how Matlovich’s exemplary service record provided an air of respectable patriotism that made him the embodiment of “Americanism.” Such an appearance dampened hysteria and legitimised the campaign for gay rights. The actor Michael Greer said Matlovich was ‘such a great image for us all’ given his ‘firm handshake and no known mental complications.’ The ex-serviceman became the first openly gay person to appear on the cover of a US magazine when Time profiled him in September 1975. Despite fighting its policy on homosexuality, Matlovich continued to exhort support for the military and remained in favour of the Vietnam War. His conservative beliefs and history of service made Matlovich, to all appearances, the embodiment of ‘Americanism’ and the ‘essence of the American dream.’ This respectability allowed Matlovich to exploit stereotypical designs of ‘Americanism’ to challenge the status quo and support a progressive cause.

Hall argued that Matlovich’s particular expression of identity brought both benefits and problems for his campaign. Having ‘proved his manhood through his service,’ Matlovich subverted gay stereotypes. He dressed in an ‘understated way’ and refuted common notions of depravity, commenting that ‘I’m gay and never wanted to do any of those things.’ Matlovich had no room for what he saw as the more effeminate aspects of ‘camp gay culture’ and feared that ‘flamboyance’ may have hindered the campaign for equality. Such an outlook won support and altered attitudes within the military. General Vince Patton remarked that ‘one of my biggest military heroes is Matlovich’ and expressed his chagrin that ‘after he comes out he’s no good. What about the lives he saved?’ After Matlovich’s death he was buried with full military honours on 4th July 1988, his funeral adorned with riderless horses and both American and Rainbow flags.

Nevertheless, Hall’s keynote contended that the same traits allowing Matlovich to identify as a patriotic, respectable American cost him support within the radical gay rights movement. Matlovich’s patriotism was intertwined with his support for gay causes; he campaigned for recognition of the AIDs crisis while wearing his military uniform and drew legitimacy for equal rights directly from the US constitution. Yet many saw military service as ‘signing up to enforce heterosexual masculinity’ in which one proved themselves by ‘killing and oppressing others.’ The 27th September 1975 edition of Gay Community News reacted to the ex-servicemen’s declaration that he ‘loved the Air Force’ with ‘Matlovich is not our brother.’ Although Hall claims that the rank and file were largely won over by this ‘genuine guy’ who was personally easy to warm to, he notes that many within the National Gay Task Force (NGTF) ‘were pissed at Lenny because of his military service.’ 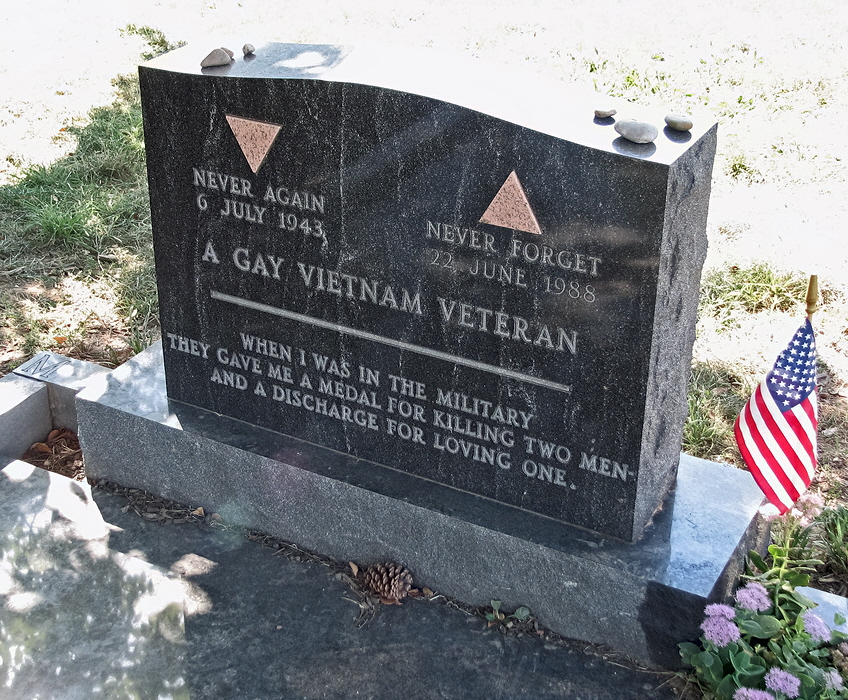 Matlovich remained outspoken on the military’s stance on gay rights – his epitaph reads, ‘When I was in the military they gave me a medal for killing two men and a discharge for loving one.’ Nevertheless, others argued that his pride in his service history entailed support for the inequality it reinforced. As such, despite Matlovich’s stance against homophobia within the military, he had little to say about the morality of war, somewhat limiting his appeal to radical gay rights activists who sought stronger societal change.

Hall concluded by noting that the consistent presence of militarism and Americanism as authenticising identities is evident throughout history and that most efforts to enact progressive change require the deployment of actions and symbols that resonate with public and political supporters. In this sense, one must utilise the shared ideas that bind Americans. As Hall eloquently alludes, this essentially equates to the entwining of militarism and masculinity with notions of patriotism and Americanism.  This is certainly true in this case. Nevertheless, Matlovich’s complex identity demonstrates how problematic understandings of ‘Americanism’ can be. His military heroism, Christianity, support for Goldwater-conservatism, and belief in hard work and individual effort made Matlovich the ‘essence of the American dream.’ However, his sexuality somewhat negated his patriotic appeal. Similarly, Matlovich’s determined campaign against the ban on gay service in the military became a cause celebre, elevating him alongside Harvey Milk as one of the most famous gay rights icons of the 1970s. Yet even this could not deflect criticism that saw military service and equal rights as diametrically opposed.

Discussion raised a further intriguing question over the way in which rights icons, generally speaking, are embraced and fought over by supporters. Hall suggested that, had Matlovich gone public in 1970, the radicalism of the gay rights scene would have stymied the appeal of his heroism and war service. A resurgence by 1975 made Matlovich ‘more respectable’ to both the gay rights movement and the wider public. Hall also argued that elements of the gay rights movement may come to support the actions of the US military, depending on their idea of an American ‘imperial project’ that promotes equal rights globally. In this sense, perspectives on Matlovich’s American national identity requires contextual understanding and consideration of the state of social movements in addition to his own stance. Hall’s exposition of Matlovich reveals the binary understandings of what constitutes Americanism and Un-Americanism as oversimplifications, especially where patriotism and support for the military is concerned.

Jon Coburn is a Teaching Fellow in American History at the University of Hull. His research focuses on the US peace and antinuclear movements of the Cold War with a particular interest in the experiences of women. Jon investigates the interrelationship between memory and identity and the way in which individual recollections of the past affect the construction of historical narratives.
View all posts by Jon Coburn →
Tagged  C20, Gender and Sexuality, History, Military, National Identity.
Bookmark the permalink.