This one-day conference struck an excellent balance between showcasing some of the work being done by young researchers working on twentieth-century US history in the UK, and offering honest practical advice for postgraduates from leading academics. Organised by Historians of the Twentieth Century United States, the day was structured with these concerns in mind, with the morning sessions focused on new postgraduate research and the later sessions addressing the practicalities of careers and development. 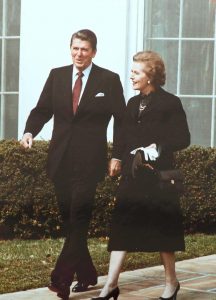 The panels were diverse in content, though with a particularly strong overall focus on the second half of the twentieth century, and even more specifically, on the Nixon and Reagan eras. Given the overarching theme of the conference, it is unsurprising that activism and dissent in the United States were recurring themes, and papers considered, for example, feminist responses to the AIDS crisis, and radical politics within VISTA during the Nixon years.

Mattias Eken (University of St Andrews) gave us a different angle on the theme of resistance by looking at the conservative backlash against the Smithsonian’s planned exhibit on Enola Gay across the 1980s and 1990s, which pitted professional historians against veterans’ groups and popular memory of World War II. Dominic Barker (Oxford) meanwhile considered powerful popular opposition to Reagan’s attempt to block sanctions against South African Apartheid regime, on the basis of his zero-sum Cold War understanding of African politics. Reagan’s diplomacy came under the spotlight in other papers, too, examining his response to the Falklands War, and to revolution in Grenada in 1983.

One paper which stood apart thematically but particularly piqued the interest of those assembled was that by Rivers Gambrell (Oxford University) on Nixon’s politicisation of football. Nixon attempted to use his knowledge of, and enthusiasm for, the sport to style himself as a relatable politician. Gambrell’s presentation made excellent use of images and anecdotes as she convincingly argued that Nixon did much to change the relationship between the executive branch and football. Her talk prompted a number of questions about how far similar phenomena might be traced back throughout twentieth-century US history, how other sports (notably baseball) might be investigated in the same way, and of course how the presidency relates to football now, in light of Trump’s recent war of words with the NFL and its players over the act of ‘taking a knee’ during the national anthem. 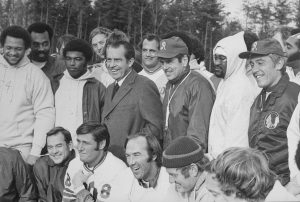 The afternoon sessions looked to address the questions and concerns of the assembled postgraduates about to enter the academic job market, beginning with a roundtable consisting of Professor Gary Gerstle (University of Cambridge), Dr Emma Long (UEA), and Dr Nick Witham (UCL). This panel was thoughtfully put together, with each member talking about their early careers before addressing questions, some submitted beforehand and  others coming from the floor. The discussion was refreshingly honest, involving three scholars at different stages of their career and with different routes to their current jobs, but who had in fact experienced many of the same challenges along the way – the difficulty of balancing work and family life, the emotional drain of applying for that first job, and the need to learn when to say no to an opportunity. The panellists successfully balanced optimism and realism, agreeing that there are both enormous privileges and undoubtable frustrations and strains which come with the pursuit of an academic career. Postgraduates were able to ask questions about a number of topics, including preparing for the US job market and securing a first book contract. Dr Seth Archer (University of Cambridge) then led another useful session, asking the audience to bring their questions about the job application process, and CVs in particular. 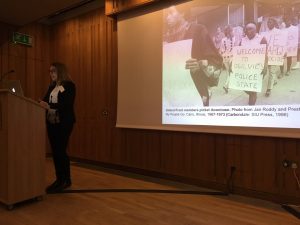 A keynote address by Dr Kerry Pimblott (University of Manchester) ended the day. Her presentation was based on her recent book Faith in Black Power: Religion, Race, and Resistance in Cairo, Illinois (University Press of Kentucky, 2017). Pimblott challenged conventional understandings of the black power movement by focusing on the central role of the black church in the United Front of Cairo, Illinois. The United Front was a mode of vibrant community organisation within a town characterised as being in perpetual economic and demographic decline. It undercut ideas about the de-Christianisation of the black power movement and its masculinisation by building around church congregations, and encouraging the participation of young people and the leadership of women. Pimblott not only offered this historical dimension, but also suggested how the strategies of the United Front, expressing revolutionary thought but making use of long-standing religious institutions at the heart of communities, might offer some ways forward to activists working in the contemporary setting. In so doing, she brought us back to the conference’s overarching theme in particularly stimulating fashion, and offered a thought-provoking end to a varied and engaging programme.

What We Learned: Organiser's report on the 1st Americas Postgraduate Conference at the UCL Institute...
Review (Part Two) of IAAS Annual Conference
Our Latest Longest War: Losing Hearts and Minds in Afghanistan
Conference Review: 'The War on the Human: Human as Right, Human as Limit and the Task of the Humanit...
Review: BAAS PG Conference 2017 - Post-Truth and American Myths (Day One)
Conference Review: ‘Women’s Transatlantic Prison Activism since 1960,’ the Rothermere American Insti...
Book Review: Philosophy and Literature in Times of Crisis: Challenging Our Infatuation with Numbers ...
Fargo 1996, Fargo 2014, and the Art of Homage

Tom Smith is an AHRC-funded PhD candidate at Trinity Hall, University of Cambridge. His thesis considers American Protestant missionaries in Hawai‘i and the Philippines in the late-nineteenth and early-twentieth centuries, and how they made use of historical narratives to mediate their relationship with American empire, and with the populations among whom they worked.
View all posts by Tom Smith →
Tagged  Black Power, Book Contract, C20, career development, HOTCUS, Job Market, Religion, US History.
Bookmark the permalink.