Home » Skills development » Careers » Academics speak out: How institutions and academic associations can ease the “oversupply” and low morale of PGRs and ECRs

Academics speak out: How institutions and academic associations can ease the “oversupply” and low morale of PGRs and ECRs

In May 2014, Professor Eleanor Dickey (University of Reading) et al conducted a study attempting to find out what can be done to alleviate the distressing conditions often experienced by postgraduates and early career researchers who are struggling to find permanent academic work. The results from the longer survey have been combined into a report of which this is an abridged summary. There were 152 responses, including 52 from people with permanent academic jobs, 45 from people with non-permanent academic jobs, 17 from unemployed academics, and 15 from graduate students.

Professor Dickey’s findings and solutions are also the basis for the new group Hortensii.

The findings of this study have been collated and edited for a general and American Studies audience by Michelle Green.

Eleanor Dickey and friends, May 2014

The high unemployment rates and poor working conditions of early career researchers have been widely reported in the media. The most recent of these appearing last week on the Guardian’s Academic Anonymous section in an article titled “so many PhD students, so few jobs” (a more extensive list can be found in Dickey’s full report). In this survey, respondents generally agreed with this picture while providing additional nuances.

The worst problems highlighted in the study were not practical ones such as poverty and constantly moving around but rather concern morale, including:

The academics in the study highlighted three ways of managing the “oversupply” and low morale of researchers for the future:

1) Manage expectations of the PhD at recruitment level and offer more options within doctoral programmes to reduce the number of struggling or disappointed early career researchers.

Although this will not address current problems, it could reduce future ones. These options are (from least favourable to most):

Furthermore, an overall cut in the number of PhD places is not achievable (some programmes are cutting, but others happily take the excess applicants) and would seriously harm departments.

At present the PhD is not seen as a marked asset in the non-academic job market and institutions should not try to change that in the structural organisation of the qualification, but universities can nevertheless improve matters slightly by helping students present their research to non-academic audiences.

Editor Recommendation: Check out Jobs On Toast for advice on how to market a PhD in careers outside academia

This might make it easier for those who are unlikely to get academic jobs to avoid investing excessive time in the PhD. Some universities already do this.

2) Ease and support transitions out of academia 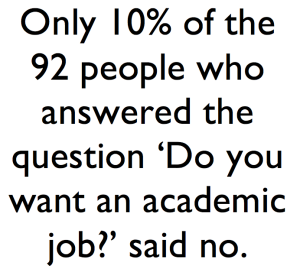 The study showed successful academics do not look down on people who leave academia, but struggling academics have little desire to leave.

The fact that luck (like merit) is a necessary pre-requisite for academic success should be publicized as a way of reducing the sense of failure attendant upon lack of success, but with great care.

Academics can and should do more here, both institutionally and via professional associations, but given the reluctance of PhDs to leave academia it will not solve the whole problem. 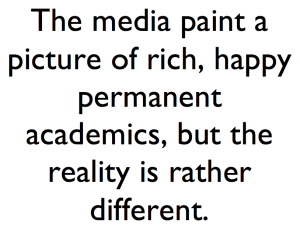 Academics on permanent contracts often face difficulties only slightly less severe than those of academics on temporary contracts.

The media paint a picture of rich, happy permanent academics, but reality is rather different: such people often face difficulties only slightly less severe than those of academics on temporary contracts. It may be that ECRs are reluctant to leave academia in part because they have an unrealistic view of what their lives would be like if they were to get permanent jobs. However, the question of how to disseminate objective facts about the daily to yearly experience of permanent academic work still remains.

Some respondents also suggested they thought departments could expand the number of academic jobs in selective fields, whether at the expense of other Humanities disciplines or by raising the profile of Humanities as a whole.

There is also the issue of ECRs with no academic job at all, since such people often desire a continued connection to the profession. Some claim that helping unemployed ECRs maintain such a connection would encourage them to remain in the job market and thereby worsen the oversupply problem, but it could also be argued that having sharply-defined boundaries to academia makes it harder for anyone to leave: to get another job is to risk being completely cut off from the world one has known.

The most popular suggestions in this category were:

Conference organizers might want to consider offering an ‘unwaged’ subsidy and blind-refereeing abstracts, and the profession as a whole might want to decide that one could always claim the affiliation of one’s PhD-granting institution — but affiliations are needed on our nametags and fees to fund the conferences. 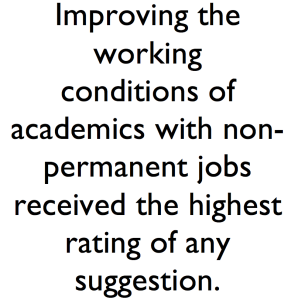 86% of responders said conditions had to be improved for early career researchers, with every identifiable group agreeing that it is important.

As a general principle, improving the working conditions of academics with non-permanent jobs received the highest rating of any suggestion. 86% of respondents said conditions had to be improved for postgraduates and early career researchers, with every identifiable group agreeing that it is important. But some respondents argued that as long as there is an oversupply of academics their labour will be mistreated. Some respondents think that any action here might just make things worse by encouraging would-be academics to remain and continue the oversupply. These respondents are not necessarily unsympathetic or hard-hearted. Should we listen to them? Is action essential? And whose responsibility is it?

Do you know of other groups or organisations who are trying to alleviate the current problems for PGRs, ECRs or the Humanities as a whole? What is the way forward? Do you think there is a fourth way, or more to say in the areas put forward by Dickey’s study? Has your institution or academic association made notable improvements in these areas? If so, please leave a comment! We would like to hear from you.

Research Skills as Survival Skills in the Post-Truth Age
More Bang for Your Buck: Teaching Nuclear History
Job-hunting: An Early Career Perspective
Editor's Feature: ECR Ben Offiler Reflects On His First Academic Interview
USSO and BAAS PG WORKSHOP: Turning the Page - from Dissertation to Book Manuscript
The Importance of Sherry Receptions; or, Where Are All The Women In This Archive? First Impressions ...
What is, and how to do, LGBT History?
My Research: Juliet Williams

Hortensii is a group of people inside and outside academia who want to alleviate the difficulties facing PhDs without permanent academic jobs. (We take our name from the Roman Quintus Hortensius, who in c. 287 BC sponsored the Lex Hortensia giving civil rights to Roman plebeians; our photograph is of Benjamin Franklin, who would also have wanted to help.) We think that even given current unpleasant realities facing academia many positive steps could be taken. We welcome anyone who shares these goals and is in broad agreement with our proposed actions. At present the contact person for Hortensii is Eleanor Dickey, a Classicist at the University of Reading in England (http://www.reading.ac.uk/classics/about/staff/e-dickey.aspx). Find out more about Hortensii here: http://hortensii.wordpress.com/
View all posts by Hortensii →
Bookmark the permalink.