‘Homo Abominum Americana’: The cultural tradition of the vampire in Snyder and Albuquerque’s American Vampire (2010).

‘Homo Abominum Americana’: The cultural tradition of the vampire in Snyder and Albuquerque’s American Vampire (2010).

One of the most popular cultural figures to be adapted within the comic book format is that of the vampire, a creature whose murky cultural origins have been prone to evolution throughout its long and varied history. A staple of both European and American Gothic traditions as well as the American horror comics of the 1950s, vampire literature has long been associated with the lower end of the established critical canon, particularly due to its sometimes violent and sexually explicit content within the ‘low’ form of the comic.[i] Yet, such an elitist view is to ignore some of the interesting insights and cultural evolutions that can be uncovered within the portrayal of the comic book vampire.  From the eroticised, science fiction creation of Forrest J. Ackerman and Trina Robbins’s Vampirella (1969) to the more viral and savage interpretations in Steve Niles’s 30 Days of Night (2002), the comic format has become a valuable arena for the reinvention of a figure that has long since been at the forefront of popular culture. Yet, while many texts have offered surprising or sometimes innovative new takes on the vampire, one book that has really focused upon this concept of undead evolution has been that of Scott Snyder and Rafael Albuquerque’s ongoing series American Vampire. 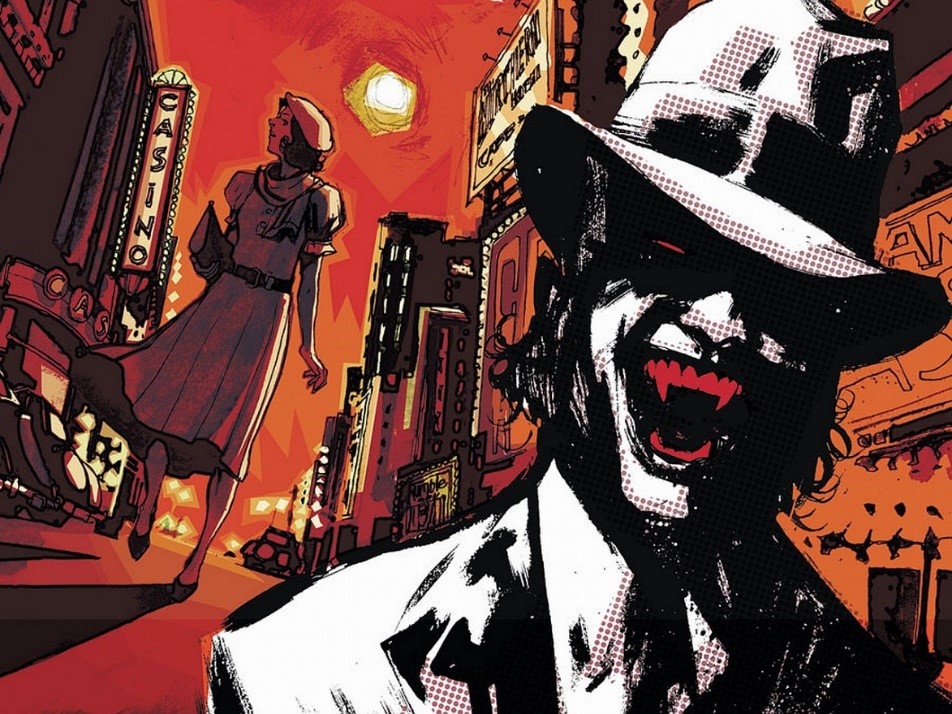 Billed as ‘A new vampire for a new century,’ American Vampire is both a violent horror story and a love letter to vampire mythology. [ii] Set across the backdrop of American history, the comic presents readers with a new breed of bloodsucker that stands within an impressive taxonomy of different vampire species, each developed by the creative team from a variety of different cultures and folklore. Known as ‘Homo Abominum Americana,’ the American vampire’s powers oppose many of the traditional characteristics that have become a convention within contemporary popular culture. Represented within the text by the violent outlaw, Skinner Sweet and his protégé, Pearl Jones, the American vampire is stronger, faster and more powerful than its predecessors. Not only this, instead of the Byronic, European stylings of the traditional ‘Carpathian’ vampire, the American vampire is distinctly working class, wearing clothes and adopting attitudes that are contemporary to each era. While it still thrives on blood, the American vampire can walk in sunlight and is instead weakened by moonless nights and gold, two noticeable subversions of the tradition. 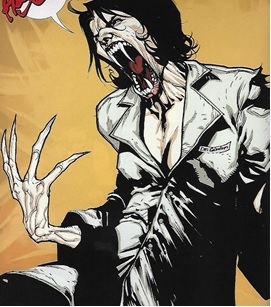 Of course, American Vampire is not the first text to manipulate many of the stereotypical conventions of this creature. Both Bram Stoker’s Dracula (1887) and Stephanie Meyer’s Twilight (2005) each reconfigured the vampire long before Snyder and Albuquerque. Instead, what makes American Vampire unique and important to the vampire’s changing cultural makeup is the text’s position as a serialized graphic narrative. Following critics such as Douglas Wolk, the American comic book has traditionally been distinguished as a ‘serialized’ narrative form and while this is certainly not true of all graphic narratives (particularly graphic novels), the nature of American Vampire’s story arcs offer compelling insight into the serial comic as an effective storytelling format.[iii]  Taking advantage of the vampire’s immortal traits, American Vampire’s creators use the creature as a narrative device to set each story arc across a variety of different temporal spaces in American history. In doing so, it also allows for the generation of new metaphorical connections, which in turn creates different story options.

For example, the story arc ‘Ghost War’[iv] focuses on America as an emerging superpower during World War II and the fight in the pacific. The text litters itself with World War II paraphernalia, motifs and technology, particularly the rise of nuclear armaments, which would later be used during the war’s closing stages. The conventional tropes and nostalgic imagery of 1940s American popular culture help ‘ground’ the story using an artificial representation of the American historical past. This reconstruction of history via popular culture follows Fredric Jameson’s concept of  the postmodern pastiche, that of ‘the imitation of a peculiar or unique, idiosyncratic style.’[v] Through such a concept, Jameson suggests that historical novels ‘can no longer set out to represent the historical past; it can only “represent” our ideas and stereotypes about that past (which thereby at once become “Pop history”).’[vi] By replicating such imagery from ‘pop history’ of 1940s America,  American Vampire not only affirms Jameson’s concepts related to postmodern pastiche, it also presents readers with new breed of vampire that is created through exposure to a Japanese chemical weapon. Here, with the connection between bioweapon and monster somewhat blurred, the vampire becomes a living biological superweapon, a metaphor for anxieties related to the arms races of the 1940s. 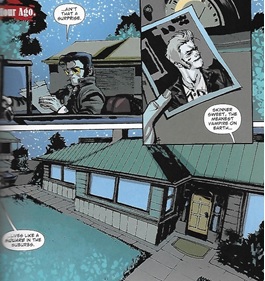 Building on cultural signifiers and symbols from a variety of eras, Snyder and Albuquerque’s stories are a postmodern pastiche of vampires and American cultural realism. Reproduced here under fair dealings provisions for academic purposes.© DC Comics

In contrast, the story arc, ‘Death Race’, moves the narrative forward to 1950s California.[vii] With the character of Travis Kidd, readers are introduced to the rise of the American teenager, while the nostalgic use of diners and even the distinctive American ‘hot rod’ illustrate how such retro iconography and Americana is innate within popular representations of the era. More importantly, by grounding the story within an artificial construction of the 1950s (one based on the popular culture of the period) the representation of the vampire also changes, this time responding to McCarthyism and the ‘Red Scare.’ Reimagined in the American Suburbs, the vampire represents the evasive, invisible other, hiding in plain sight and thus reflecting the anxieties within the popular conception of the American national character of that time. It becomes a metaphorical substitute for fear of the communist threat, a marginal, invasive force that has invaded the traditional American strata.

This metaphorical instability of the vampire within American Vampire and its ability to adapt according to the temporal space in which its stories are set is very much in keeping with the creature’s history within folklore and cultural tradition. As Sir Christopher Frayling notes, ‘Although we normally associate the myth with Eastern Europe or Greece […] traces of vampirism are to be found in most cultures,’ something that only illustrates the vampire as an unstable, adaptable figure that can change according to its culture or environment.[viii] Such a view is supported by Ken Gelder’s description of the creature in that the vampire’s nature is fundamentally conservative – it never stops doing what it does; but culturally, this creature may be highly adaptable. Thus it can be made to appeal to or generate fundamental urges located somehow ‘beyond’ culture (desire, anxiety, fear), while simultaneously, it can stand for a range of meanings and positions in culture.[ix]

It can therefore be established that in taking advantage of the serialized format of the comic book, American Vampire uses popular images associated with American popular history to present both the immortal aspects of the vampire, but also its adaptability as a metaphor, one that can generate a variety of different story options that present cultural anxieties associated with the social climate of each artificial historical period.

American Vampire therefore illustrates the importance of horror comics within modern constructions of cultural traditions. Not content with simply subverting previous vampire traditions, the series uses the comic books serialized format as a way of attributing new metaphorical connections to the vampire figure, particularly through the creature’s immortal and unstable cultural makeup. With comic book readerships rising, it is becoming clear that the form has an important part to play within modern audiences’ understanding of cultural traditions. [x] All textual forms draw upon one another to create intricate frameworks that allow readers to understand cultural traditions. The comic book is no different and contributes to this process by offering new and innovative reinterpretations from a broad scope of texts and cultural traditions, whilst retaining its own distinctive language, grammar and cultural history. Thus, comics have woven the age-old legend of the vampire into the vast tapestry of modern, popular cultural tradition.