Throughout November 2015, U.S. Studies Online will be publishing a series of posts to mark Native American Heritage Month. In this post Juliane Schlag (University of Hull) discusses the concept of Ethnobotany in Native American Studies and the problems defining it within the historiography. 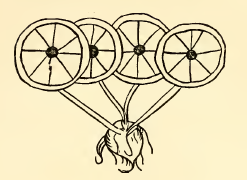 Ethnobotany is a research field between Botany, History and Ethnology. Researches in this field investigate how humans use and interact with the plants present in their ecosystem. They therefore either look at archaeological plant remains, historic descriptions or traditions of plant use. Similar to Archaeology, knowledge deduced from Ethnobotany can help to re-establish the history and identity of oral cultures and marginalized cultures where literary traditions have not survived, or can help to understand how humans in general categorize the natural world around them.

In the mid-1990s Catharine M. Cotton noted that nearly half of the world wide produced ethnobotanical studies, 41%, were carried out in America (Cotton 1996: p. 3). Ethnobotany as a concept was first outlined in the United States. Until today, Native Americans are the primarily researched group within this approach. Even though practised all over the world, Ethnobotany is not fully established as a discipline yet. Due to its interdisciplinary nature, researchers from different backgrounds have tried to define and justify it as a new research category, leading to multiple definitions and fragmentation of methods in the field. The debate became more complex in the last fifteen years, showing that the interest in the field is growing and that the research produced contributes to established themes, including Environmental History and Native American Historic. But there is still no consensus about an agreeable definition for “Ethnobotany,” making it problematic for scholars from other fields to understand and incorporate research results produced by ethnobotanical studies. The following post will investigate the historic origin of the field and outline its modern modalities. The post aims to provide an overview of the history of the concept of “Ethnobotany” in order to question its current trend of fragmentation and to provide a critical outlook on the fundamental character of current research.

The first semi-ethnobiological studies were carried out by European priests, travellers and later settlers in North America. In cases where Native Americans could not be used for profitable trade, the European settlers tended to marginalize and antagonize them. Early European descriptions of local tribes were often written by priests sent into communities in order to convert them. Among those, the pilgrim John Josselyn (ca. 1638 – 1675) was one of the first to undertake a categorical evaluation of North America’s plant life, which he came to know during a period of eight years living with Indians [Fig. 1]. Unaware of Ethnobotany as a concept, he applied an early ethnobotanical perspective to his account by describing how the Indian tribes he lived with would use specific plants, for example the Hemlock Tree:

To break Sore or Swelling: The Indians break and heal their Swellings and Sores with it, boyling the inner Bark of young Hemlock very well, then knocking of it betwixt two stones to a Playster, and anointing or soaking it in Soyls Oyl, they apply it to the Sore: It will break a Sore Swelling speedily. (Josselyn 1671 [1865]: p. 119) 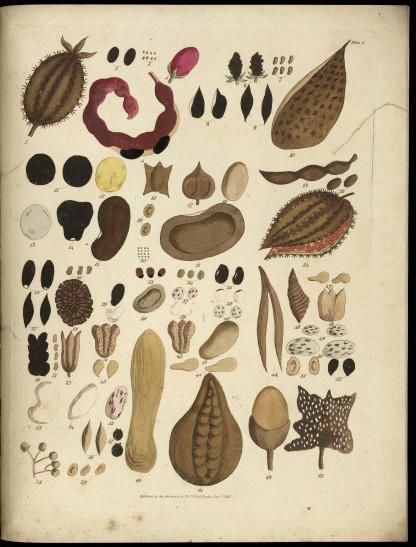 Josselyn stands at the beginning of an era in which European intellectuals started to extensively record and categorize the world around them. A trend emerged in the course of which early naturalists tried to document everything in as much detail as possible. Their enterprise resulted in detailed pharmaclopaedias and private collections. Social and scientific prestige became linked to the quantitative data and material gathered which stimulated voyages to all parts of the world in order to discover new species [Fig. 2]. Huge botanic collections, like those of Sir Hans Sloane (1660-1753), would later form the foundation for museums and university research around the world. By the mid-1800s the first taxonomy of plants became available, opening a window for a range of scientific approaches. Throughout the course of specialisation, researchers in several developing fields became interested in American Indian plant-usage, namely early botanists, anthropologists and folklorists. (D’Ambrosio 2014, p. 51 Tap. 2).

In the course of American independence another transition took place: travel reports by Europeans were supplemented with scientific accounts from settled Americans. In 1873, Stephen Powers introduced the term “aboriginal Botany” (Ford 1978: p. 33ff.), but it was not until the World Fair of 1893 in Chicago that American archaeologists and anthropologists would actually get together over plant material preserved by the Pueblo Indians. In the succeeding years the Hazzard collection, exhibited at the World Fair, was analysed by John Harshberger who first came to describe his research as “Ethnobotany” in 1896. Harshberger analysed the material in order to recreate subsistence strategies of the Pueblo Indians and for the first time tried to re-establish an effect relationship with nature.

The study of ethno-botany aids in elucidating the cultural position of the tribes who used the plants for food, shelter or clothing. […] An examination of other manufactured articles of vegetal origin shows that these people were extremely provident; nothing was allowed to go to waste. […] If it no longer served one purpose, it was devoted to another. […] For example, when the hollowed out pumpkin no longer served the purpose of a jar it was broken into pieces and the charred fragments served as scraping instrument. […]

This careful husbanding of their resources may be directly traceable to two causes: first, it was difficult to carry large and bulky articles from the level of the canon to the rocky shelves above; […] second, they lived in an arid region, where the materials ready at hand for the various uses of domestic life were extremely limited … (Harshberger 1896: p. 146 f.)

Nevertheless, Harshberger classified Native American communities as lying somewhere between a “savage” and “pastoral” stage of development. This need for a classification of agency in the definition of Ethnobotany prevailed until today and only got supplemented with classifying specific historic periods (Paleo- Ethnobotany) and intentions of utilization (Economic Botany). Archaeologists researching preserved plant remains in order to find out about past geographies and environments, would call their research “Paleo-Ethnobotany” in order to stress on the historic dimension of their research. Botanist and Ethnologist interest in the social interactions between humans and plants would occasionally call their studies “Economic Botany” in order to stress a potential capitalistic character regarding the use of plants in traditional medicine. Newer branches include “Ethnoecology”, in which researchers try to re-establish traditional vegetation management, and the field of “Cognitive Ethnobotany” in which scholars investigate cultural mind-sets regarding nature. All these fields are branches of “Ethnobotany” and in some way try to define the field as a whole. The following table shows the history of concepts of “Ethnobotany” after Harshberger’s definition from 1896 onward: 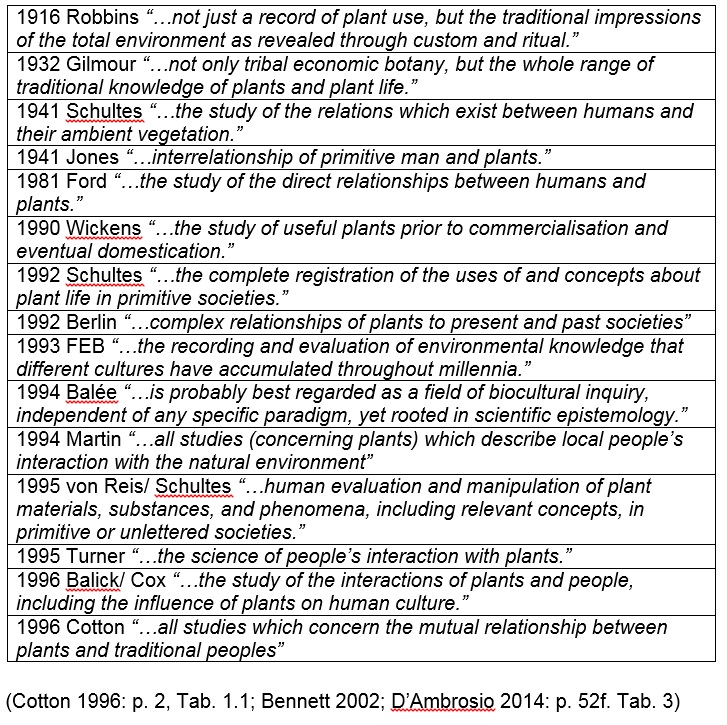 In those various interpretive patterns, Ethnobotany seems to be defined through geographic and historical definition of agency, by liking plant use to “traditional people”, “local people”, “primitive or unlettered societies”, “past societies”, “environmental knowledge that…cultures have accumulated throughout millennia” aka “scientific epistemology”. In 2002 Bennett concluded from the rising trend in new, but then historic circular definitions, from the beginning of the 1990s onward that “[much] more than a semantic problem, this ambiguity shows ethno botany’s desire and need to establish its identity among better defined disciplines” (Bennett 2002).

Looking at all the definitions, he concluded that it is in fact the outdated link to a specific agency which makes most of them impractical to use. Going back to Dick Ford’s analysis of the dichotomy of “primitive man” vs. “humans” he argued that “differences in botanical knowledge between non-literate and literate societies are quantitative not qualitative” (Bennett 2002). Therefore, definitions of Ethnobotany made by Turner – “the science of people’s interactions with plants” – or Balick and Cox – “the study of the interaction between plants and people” – are “perfectly acceptable [because] they include the two fundamental components of ethnobotany – plants and people” (Bennett 2002). They also allow comparative approaches analysing how communities would alter their knowledge due to relocation or accumulation or lose of information. The problem, of course, is that these simple definitions incorporate plants and people, but do not recognize ethnicity, history, cognition etc. in the form of agency, which are already part of the specialised braches of the same field.  Because agency is characterised differently in all these sub-branches, multiple definitions of “Ethnobotany” developed. As this blog post has shown, this trend so far only lead to a repetition of outdated, even racist generalisations which do not help the field to establish itself in modern research. Even though the debate is not settled yet, thanks to Bennet and other researchers, the main problems within the search for a definition have been lined out, encouraging scholars to be more critical in the future.

Bennett, B.C. (2002) Ethnobotany and Economic Botany, subjects in search of a definition, in: Encyclopaedia of life support systems (EOLSS: Paris).

D’Ambrosio, U. (2014) Theoretical reflections on Ethnobiology in the third millennium, in: Contributions to SCIENCE 10, p. 49-64.

Ford, R.I. (1978), Ethnobotany: historical diversity and synthesis, in: Ford, R.I., The Nature and Status of Ethnobotany, Anthropological paper of the Museum of Anthropology University of Michigan No. 67 (Ann Arbor: Michigan), p. 33-50.

Juliane Schlag is currently completing her PhD, entitled “Indigenous American Trees in Historical and Biological Context”, at the University of Hull under the supervision of Professor Joy Porter and Professor Roland Ennos. Her research focuses on the North American forest during the early modern transition period. It investigates the substantial significance of trees for indigenous North American communities and analyze important changes that occurred when European settlers started to utilize trees for commercial use from 1640 onward.
View all posts by Juliane Schlag →
Tagged  Ethnobotany, Historiography, History, Native Americans.
Bookmark the permalink.