Review: Historical Fiction in the United States since 2000

‘Historical Fiction in the United States since 2000: Contemporary Responses to the Past’, University of Nottingham, 18 March 2017

Since the beginning of the twenty-first century, historical fiction has experienced an uptake in critical and commercial popularity. Many contemporary works of historical fiction depart from the established traditions of linear representations of time and strict factuality. As Elodie Rousselot has noted, these works might be considered ‘neo-historical’ insofar as they critically revisit cultural, social, and political events while being mindful of the present moment.  Focusing on the historical fiction genre, this one-day symposium gathered scholars from the UK and North America at the University of Nottingham to discuss the ways in which contemporary American writers have been dealing with history through fiction.

The day began with a panel on the re-conceptualisation of American slavery, where Christopher Lloyd (University of Hertfordshire) and Michael Docherty (University of Kent) both discussed Colson Whitehead’s now Pulitzer Prize winning novel The Underground Railroad (2016). Whitehead’s novel moves deftly between genres, transforming from what appears to be a traditional slave narrative into a science fiction adventure in which the Underground Railroad is not a network of safe houses but an actual train. Both panelists emphasised the narrative’s fantastical qualities. Docherty noted that the novel derives truth from its fast and loose structure and its departure from strict fact. While the book’s magic realist qualities might appear to be anti-historical, the re-constituted details highlight what might be erased by naturalistic representations of history.  As Lloyd observed, historical fiction foregrounds the cultural meaning of its transmission; drawing from Michael Hanchard, he argued that cultural memory—as in the case of that represented in The Underground Railroad—can be fundamentally at odds with state or institutional memory. Shifting from the magical realism of Whitehead’s novel, Katie Myerscough (University of Manchester) focalised the Southern plantation as an inherently gothic space in her paper on Valerie Martin’s novel Property (2003). Told from the perspective of slaveholders, Property is a work of perpetrator fiction that asks questions of complicity, including the complicity of the writer. While Property represents history in a drastically different way than The Underground Railroad, both novels draw implicit attention to the ongoing relevance of slavery in contemporary American culture and consciousness.

The second panel, ‘Counterhistory, Satire and Postapocalypse’ emphasised disrupted or diverted temporalities. Diletta De Cristofaro (De Montfort University) presented on David Means’ novel Hystopia (2016), an example of historiographic metafiction set in an alternate version of the 1970s in which John F. Kennedy lives to become president through the Vietnam War years. De Cristofaro noted that the sense of an ending binds otherwise fragmented aspects of the narrative, applying order to that which has no intrinsic order.  Trever Gibbs (ESJ Paris) discussed the representation of history through satire in the controversial but acclaimed animated television series The Boondocks (2005- ). While the series is set in the present day, it moves freely through time, using history and farcical potential futures to comment on contemporary politics. The panel moved from satire and postmodern irony to familial redemption in Corina Lopes’ (Central Connecticut State University) paper on Cormac McCarthy’s The Road, where she discussed the potentially restorative nature of the relationship between the novel’s father and son. The panel discussion problematized this notion of redemptive futurity. One attendee cited the theorist Lee Edelman’s book No Future (2004), which advocates for the denial of ‘reproductive futurism’ in favor of a radical queer negativity. Other attendees questioned whether there can be futurity in a post-apocalyptic landscape. The papers on this panel each troubled linear temporality by emphasising the complex interconnectedness of history, imagined futures and the present moment. 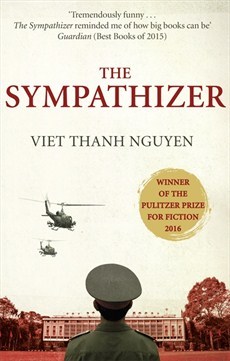 After an enjoyable lunch in Highfield House’s red brick courtyard, we returned for a panel on contemporary re-examinations of the long 1960s. Debra Shostak (The College of Wooster) presented on Viet Thanh Nguyen’s novel The Sympathizer­ (2015), another Pulitzer Prize winner. This self-reflexive novel subverts mainstream representations of the Vietnam War by re-framing it—bizarrely—in the context of a confessional spy novel. Mark West (University of Glasgow) prompted a stimulating debate with his paper on post-postmodern aesthetics in contemporary 1960s novels. These novels dramatise their roots in postmodernism but can perhaps be understood more clearly through the lens of post-postmodernism. I, too, contributed to this panel, discussing the queer relationship between fictionalised versions of Wendy Yoshimura and Patricia Hearst in Susan Choi’s novel American Woman (2003). In American Woman, Hearst and Yoshimura’s queer relationship evades all forms of record and seems to disappear outside of the context of what was called Hearst’s ‘lost year’. As West pointed, the 1960s have been popular in contemporary historical fiction. While some of these novels are nostalgic, many—including American Woman and The Sympathizer—are self-reflexive, querying the process by which some historical perspectives are foregrounded while others are buried.

In a two-person panel on representing cities, James Peacock (University of Keele) returned to a discussion of futurity in historical fiction, exploring the representation of children in Lindsay Faye’s novel Gods of Gotham (2012). The novel is set in New York in 1845, yet the construction of childhood innocence is informed by what might be described as a post-9/11 structure of feeling. In his paper on Dennis Lehane’s novel The Given Day (2008), Brian Kennedy (Independent scholar) discussed the novel’s bleak naturalism and message of hopelessness. While this 700-page novel is rooted in the past, its attention to corruption, police violence and racial inequity resonate contemporarily. Both novels approach their subject matter with steady realism—an interesting detour from the postmodern self-reflexivity that characterized many of the other discussions.

The final panel of the day was devoted to E. L. Doctorow’s 2009 novel Homer and Langley. The novel dramatises the lives of two brothers who lived in Harlem until their deaths in the late 1940s. The brothers were infamous hoarders and eventually died grimly amongst their tremendous accumulation of things. Chris Gair (University of Glasgow) referred to Emersonian transcendentalism to reflect on the way that Doctorow deploys Homer’s blindness to write about what can’t be seen. Sound was brought to the fore in Villy Karagouni’s (University of Glasgow) paper on the narratological value of music in the novel. Homer, a skilled piano player, is attuned to everyday sounds as well as musical ones and these noises shape his conscious understanding of the world—insulated though it may be by possessions. Sophie Vlacos (University of Glasgow) presented the final paper of the afternoon, approaching the novel’s stayed historicity from a Heideggerian perspective. The novel is based on historical events and yet seems to be insulated from time in the claustrophobic and atrophied space of the brother’s apartment. In its entirety, this panel emphasised a move away from visual representation towards other sensory modes of engagement.

Historical fiction is sometimes characterized as genre fiction—not serious enough to be considered literature—yet the discussions throughout the day demonstrated that this dismissal is an unjust generalisation. Much of the work discussed at this symposium has been both commercially and critically successful, as exemplified by The Underground Railroad, which was featured on Oprah’s book club before winning the Pulitzer Prize. Panels reflected ongoing debates about cultural memory, race, futurity and the self-reflexivity of postmodern representation in historical fiction. By twisting or revising facts, many of these texts ask readers to consider how history is told, which stories are privileged and how the traumas of the past continue to inform our contemporary moment. Many thanks are owed to Ruth Maxey for organising this informative and engaging day on the green campus of the University of Nottingham.

Review: Borders vs. Bridges: Nationalism and Transnationalism in the Americas
Conference Review: 'Not Your Average Superhero'
Review: ‘Americans in the World’, HOTCUS Winter Symposium 2021 (Online)
Review of "Created Equal?" IAAS Annual Conference 2014
Book Review: American Apocalypse: A History of American Evangelicalism by Matthew Avery Sutton
Book Review: Liking Ike: Eisenhower, Advertising and the Rise of Celebrity Politics by David Haven B...
Book Review: The Coming of Southern Prohibition by Michael Lewis
The Best of 2014, and What's Next for U.S. Studies Online in 2015