Historians at Play: American History in Modern Board Games

Since the mid-2000s board gaming as a hobby has become ever more popular and accessible, rising in quality to the extent that gamers are now allegedly experiencing a Golden Age of board games. Among the deluge of board and cards games that have been published in this modern era of board gaming, the history of the United States has been a popular and recurrent theme, perhaps more so than in recent generations of video game releases. Whilst board games based on the history of United States have traditionally tended to focus on the nation’s military conflicts of the past, firmly entrenched in the realm of war gaming, there has been a shift in focus during the last decade which has seen other aspects of American history explored through the medium of board games. 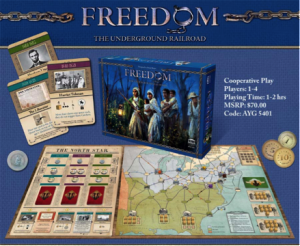 Freedom: The Underground Railroad (2012)
In Freedom, players are working to build up the strength of the Abolitionist movement through the use of notable figures and pivotal events. By raising support for the cause and moving slaves to freedom in Canada, the minds of Americans can be changed and the institution of slavery can be brought down.
Source: Academy Games

Perhaps the most notable example of this shift can be seen in Academy Games’ Birth of America Series, which although primarily consists of war games in the form of 1812: The Invasion of Canada (2012) and 1775: Rebellion (2013), features Freedom: The Underground Railroad (2012), a game that recounts the Abolitionist movement’s struggle against slavery. Historic individuals make up a selection of the playable cards in the game and the rules provide overviews of the time period, making it clear that Freedom attempts to fulfil Academy Games’ mission statement to publish games that can be used to teach history. Indeed, it appears that Academy Games has a consumer base willing to engage with this historical theme when one recalls that Freedom was funded through Kickstarter and managed to raise eight times the amount of money required to reach the funding goal.

However, Academy Games has certainly not been alone in widening the scope of American history in board games. The making of the Constitution has been the theme of Founding Fathers (2010) and John F. Kennedy and Richard Nixon’s Presidential election campaigns can be played out in 1960: The Making of the President (2007). The United States’ role in the Cold War has naturally leant itself well to a variety of strategy games such as the critically acclaimed Twilight Struggle (2005) which sees the United States and Soviet Union vying for influence over a world map board and experiencing the real events of the period. The famous expedition of Meriwether Lewis and William Clark is told through Lewis and Clark: The Expedition (2013) and early colonial America forms the context of the economic based game New Amsterdam (2012). US-Mexican relations even play a pivotal role in the mechanics of Pax Porifirana (2012), a card game based on the Mexican Revolution. 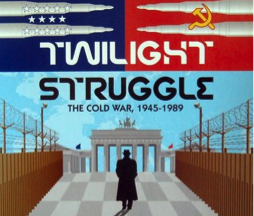 Twilight Struggle: The Cold War, 1945-1989 (2005)
Twilight Struggle is a two-player game simulating the forty-five year dance of intrigue, prestige, and occasional flares of warfare between the Soviet Union and the US. The entire world is the stage on which these two titans fight to make the world safe for their own ideologies and ways of life. The game begins amidst the ruins of Europe as the two new “superpowers” scramble over the wreckage of WWII. Source: BoardGame Geek 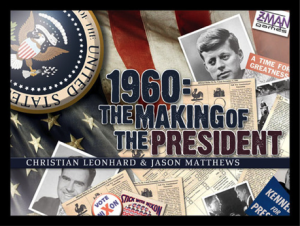 1960: The Making of The President (2007)
In 1960, you take on the role of one of these great protagonists vying for the right to lead his country into the heart of the Cold War. Using a card-driven game system, all the major events which shaped the campaign are represented: Nixon’s lazy shave, President Eisenhower’s late endorsement, and the ‘Catholic question’ are all included as specific event cards. The famous televised debates and final election day push are each handled with their own subsystems.
Source: BoardGameGeek

The wide selection of historical themes within board games is no doubt beneficial from the vantage point of historians and board gamers alike. More diverse themes keep the hobby fresh for gamers and the growth of another enjoyable medium by which to engage with America’s past can only help the cause of the historian.

Putting Freedom back into the spotlight, it offers a unique way to physically interact with the issue of slavery. The mechanics of the game are assigned to a real history and the slaves that the players cannot save represent the real slaves that were doomed a fate that the game leaves to the players’ imagination. Physically moving the slaves around the United States, represented by simple wooden cubes, makes it difficult not to treat the slaves as objects. Freedom thus represents a game that was designed from the top down. Top down design prioritises theme whereas bottom up design prioritises game mechanics. In an effort to make players engage with history, theme normally has to be prioritised and not get bogged down or side-lined by the game mechanics in order to keep the players engaged with the game’s narrative. Yet designers of course have to balance both mechanics and theme or risk creating a game that is not enjoyable or good quality. Indeed, a strong historical theme might act as a repellent to players.

For a good discussion of top down design see Mark Rosewater’s ‘A View From the Top’, head designer of Magic: The Gathering

The aforementioned Pax Porfiriana is a complex card game with a historical theme that is not particular popular, making only those gamers who have an interest in the Mexican Revolution willing to brave the rules to experience the game. It is undeniable, however, that a popular historical theme can often be attached to mechanics in order to sell. Fantasy Flight’s Cold War: CIA vs KGB (2007) is driven by its mechanics rather than the theme, as it could have easily been designed to fit any conflict, historical or fictional. Board game website Shut Up & Sit Down discussed the theme of Lewis and Clark, suggesting that it was not a particularly strong component of the game design and that it was certainly designed from the bottom up with the popular historic theme tagged on. This design strategy is not necessarily a problem, as the final product can still ignite an interest in the past, but the game would not have been designed specifically to make the players think about American history to the extent that a game such as Freedom does. 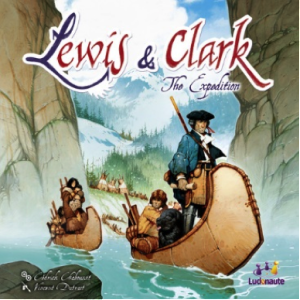 Lewis and Clark: The Expedition (2013)
Lewis and Clark is a board game in which the players manage an expedition intended to cross the North American continent. Their goal is to be the first to reach the Pacific. Each one has his own Corps of Discovery that will be completed by the Native Americans and the trappers met during the journey. He has to cleverly manage his characters and also the resources he finds along the way.
Source: BoardGame Geek 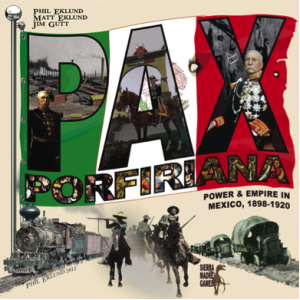 Pax Porfiriana (2012)
Experience borderland Mexico as it enters the 20th century under the iron grip of the dictator Porfirio Diaz. Players assume the roles of rich cattle and rail barons attempting to survive in a ruthless landscape of spies, indians, bandidos, and lawyers. They must choose to be pro or anti Diaz, and win by becoming either the new dictator of Mexico or the legendary Hero of the Revolution. Or by surviving with the most gold.
Source: BoardGame Geek

Whilst this library of board games is of course far from complete and only scratches the surface of American history, it represents a commendable start of what will hopefully constitute an exciting trend. It certainly seems possible, based on the current selection of games available, that a board game could be designed that addresses historical moments such as the Great Depression, Manifest Destiny or even the Civil Rights Movement. These board games may never be able to reconcile with the historical debates that rage in the academy or provide detailed historical analyses, but they offer an accessible, enjoyable and, perhaps most importantly, alternative way to engage actively with historical narratives through interaction with components in a social environment.

Alex Bryne submitted his PhD in American Studies and History at the University of Nottingham in 2017. His thesis traces the history of the Monroe Doctrine during the early twentieth century and addresses the relationship between notions of national security, regional hegemony, and Pan-Americanism.
View all posts by Alex Bryne →
Tagged  C19, C20, Cold War, Early America.
Bookmark the permalink.