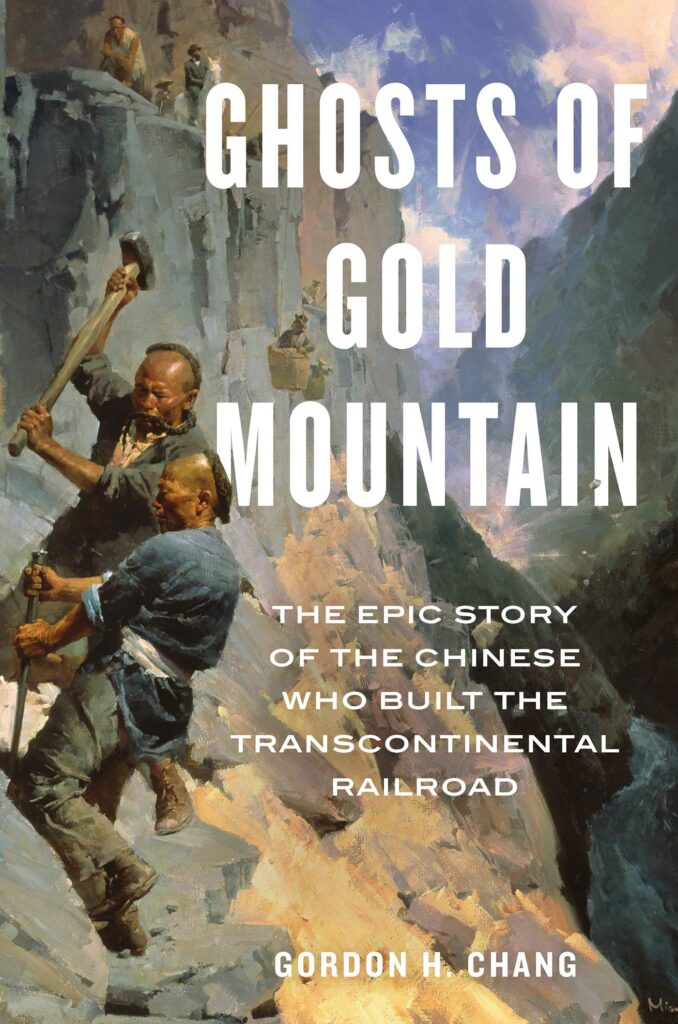 The building of the Transcontinental Railroad in the aftermath of the U.S. Civil War (1861-1865) was a symbol and achievement of unification, of future imperial growth. In his USSO Book Hour Talk, Writing History without Documents: Chinese Railroad Worker Ghosts and American History, Stanford historian of Sino-American relations Gordon Chang stated that so much of American history is railroad history. Most railroad history as American history is nationalistic, triumphalist, and technologically driven, focusing on ‘great white men’ and machines. In the name of Western expansion and “civilization,” technology changed Americans’ understanding of time, space, and distance. Paradoxically, the railroad simultaneously united and divided, connected and disconnected. A technologically advanced America in the late-nineteenth century was also the America of Plessy v. Ferguson (1896). Railroad history simultaneously involves the building of infrastructure and the ways in which a post-slavery America remained segregated after Reconstruction (Zoom 1:08:00-1:13:00). Moreover, it is also a history whose very process has long marginalized and obscured historical actors whose labour made that infrastructure possible.

Chinese laborers originally from Southern China who worked on the Transcontinental Railroad—or “Railroad Chinese”—constitute such a group. Chang’s Book Hour Talk focuses on his recent work, Ghosts of Gold Mountain: The Epic Story of the Chinese Who Built the Transcontinental Railroad (2019). In it, he argues that use of Chinese makes the history of the Transcontinental Railroad global and transnational. An otherwise national achievement becomes a site where the history of Chinese diaspora from Canton/Guangzhou in South China to South America, the Caribbean, the Pacific, Southeast Asia, and North America meets the history of the United States after the Civil War. As a counterpoint and remedy to prior, technologically driven railroad histories, Chang focuses on recovering the lived experience of the Railroad Chinese. He also discusses the challenges of the lived-experience approach to historical research and the significance of the story of the Railroad Chinese for United States history. The result is a fruitful and thoughtful exchange between two different audiences—historians and literary scholars—and their methodologies.

Largely written out of earlier railroad histories, the Railroad Chinese constitute a spectral presence. Ghosts arise as a useful motif and concept in both the roundtable discussion and Chang’s narrative due to subject matter, historical processes, sources, and methodology (Zoom, 40:00-50:00). Nationalistic histories as a process erase lived experiences and histories of violence in the name of “progress,” rendering once flesh-and-blood human beings invisible, mute—and apparitional in various ways. In Chinese and Western culture and literature, ghosts are restless spirits. Chinese believe that the spirit resides in the bones, and that the bones need to be returned to the home village—if not recovered, these wandering spirits haunt the living.

Unlike more famous individuals, however, the masses of Railroad Chinese left no written records. Language also presents its own problems: Chinese names appeared in several different ways in news articles, meaning that the reader cannot be sure of their actual identities (Chang, 238-39). Reconstructing their lived experience requires an array of different sources, utilizing an interdisciplinary approach. Chang meticulously uses archaeology, material culture, periodical literature, historical photography, business records, and contemporaneous personal observations about Chinese in America (Chang, 102; Zoom 22:14-35:00). It becomes clear that Railroad Chinese persevered in a mostly hostile foreign country and they left lasting legacies in China and the United States. Their story was also one underscored by the violence of arduous labor, harsh working conditions, and racism. And yet, In Chang’s recasting of the building of the Transcontinental Railroad, therefore, technology and lived experience exist in tension. His multidisciplinary approach reminds us that dead men can and do tell tales—even when they are rendered invisible and silent in death, and leave behind only fragments of their existence that must be pieced together.

This book-talk discussion of Ghosts of Gold Mountain does well to emphasize global and transnational approaches to U.S. history and Asian-American Studies (Zoom 59:00-1:08:00). Chang’s work is a history of racial exclusion and labour during Reconstruction in the U.S. context, and comparable to reconstructions elsewhere in the Anglophone world in the aftermath of war (e.g. Chinese coolie labour in South African reconstruction efforts after the Boer War). Thinking transnationally and even transhistorically provides a way to deconstruct important American shibboleths, one of them being that migration always leads to better living conditions. In addition, the Railroad Chinese made Western expansion in U.S. history possible, thus “[overturning] how we view America’s history and origins.” Historians of the United States might further explore how Ghosts would complement and complicate other histories of the late-nineteenth century, such as Heather Cox Richardson’s treatment of nineteenth-century middle-class ideology, West from Appomattox (2007). American Studies scholar Manu Karuka has integrated Chinese diaspora history with that of Indigenous history and Westward expansion in Empire’s Tracks: Indigenous Nations, Chinese Workers, and the Transcontinental Railroad (2019).

Like Banquo’s incriminating ghost in Shakespeare’s Macbeth, transnational and global histories of the marginalized, invisible, and mute demand a reckoning with a far more dynamic and complex, even if unsavory, United States history. As Chang reminds us in this talk, “history is not linear, and doesn’t get better and better over time. It can actually run backwards, and also be more limited and limiting, depending on the interpretation” (Zoom 22:14). At times when governments stress a whitewashed, “patriotic” history, histories such as that of the Railroad Chinese are necessarily richer. They are viscerally truthful and more honest, even if they belie easy and comforting narratives of technologically driven progress that lull us into celebratory complacency. The roundtable’s final remarks on the global history of technology, progress, and the spectral presence of segregation remain relevant: “Immigrants (We Get the Job Done)” from the Hamilton Mixtape riff on Lin Manuel Miranda’s hip-hop Broadway musical Hamilton (2015), showcases the exploitation of migrant workers in contemporary America. The multilingual (Spanish and English), transnational, music-video of “Immigrants” juxtaposes lyrics about past and present economic imperialism with imagery of railroad cars and railroad tracks circling the globe. Those rendered invisible and mute while performing the hard labor that keeps the American Dream running leave no paper trail when living in the shadows. Notwithstanding the promises of the American experiment, they are still “America’s ghost writers; the credit’s only borrowed.” [1]

You can listen to Dr. Gordon Chang’s talk on our YouTube Channel here.

[1] K’naan, featuring Residente, Riz MC, and Snow Tha Product, “Immigrants (We Get the Job Done),” The Hamilton Mixtape. Atlantic Records. 2016. While the song and its music video can stand alone, its lyrics demand a fair amount of unpacking that speak to some of the themes in this roundtable talk. The music video juxtaposes migrant exploitation in the current-day United States with specific aspects from Hamilton and its overall argument about the meaning of the American Revolution.  Its title comes from the words exchanged between Marquis de Lafayette and Alexander Hamilton during the track “Yorktown (The World Turned Upside Down”—the battle that decided the outcome of the American War for Independence. The rebels win and collect their dead, and the British go home. But does that mean freedom in and for America? Not yet. https://www.youtube.com/watch?v=6_35a7sn6ds

60 Seconds With Nick Witham
God and the Revolution: Christianity, the South, and the Communist Party of the USA
Storify of our #bookhour twitter chat on MAÑANA MEANS HEAVEN by Tim Z. Hernandez
The Un/Incorporated, Continental, Overseas, Global States of America: The Grammar of Jurisdictional ...
My Archival Adventure as an Academic Researcher across the Atlantic
Book Review: The Rise of Common-Sense Conservatism: The American Right and the Reinvention of the Sc...
Storify of #bookhour chat on THE MANDIBLES by Lionel Shriver
Review of American Imperialism and Identity Conference

Wendy Wong Schirmer has taught Early and Modern U.S. History, and also Intellectual Heritage. Trained as a diplomatic and cultural historian, she earned her Ph.D. in Early American history at Temple University. Currently based in the United States, she lives outside of Philadelphia.
View all posts by Wendy Wong Schirmer →
Tagged  Sino-American Relations, Transcontinental Railroad.
Bookmark the permalink.