Review: Hardboiled History: A Noir Lens on America’s Past

‘Hardboiled History: A Noir Lens on America’s Past’, University of Warwick, 19 May 2017

For those unfamiliar with the genre, ‘Hardboiled’ refers to crime fiction, narratives usually focalised through tough or cynical detectives and centring primarily on organised crime in prohibition-era United States.  Authors such as James Ellroy, Philip Marlowe and Mike Hammer encapsulate the era, as do movies based on their works. The genre of noir, however, categorises fiction that takes the perspective of a victim, suspect or spectator.  While closely related to the Hardboiled genre, these differing perspectives are notable. Thus, the ‘Noir lens on America’s Past’ promised to interrogate these genres, the manner in which they addressed social anxieties, and their continuing legacy and influence. 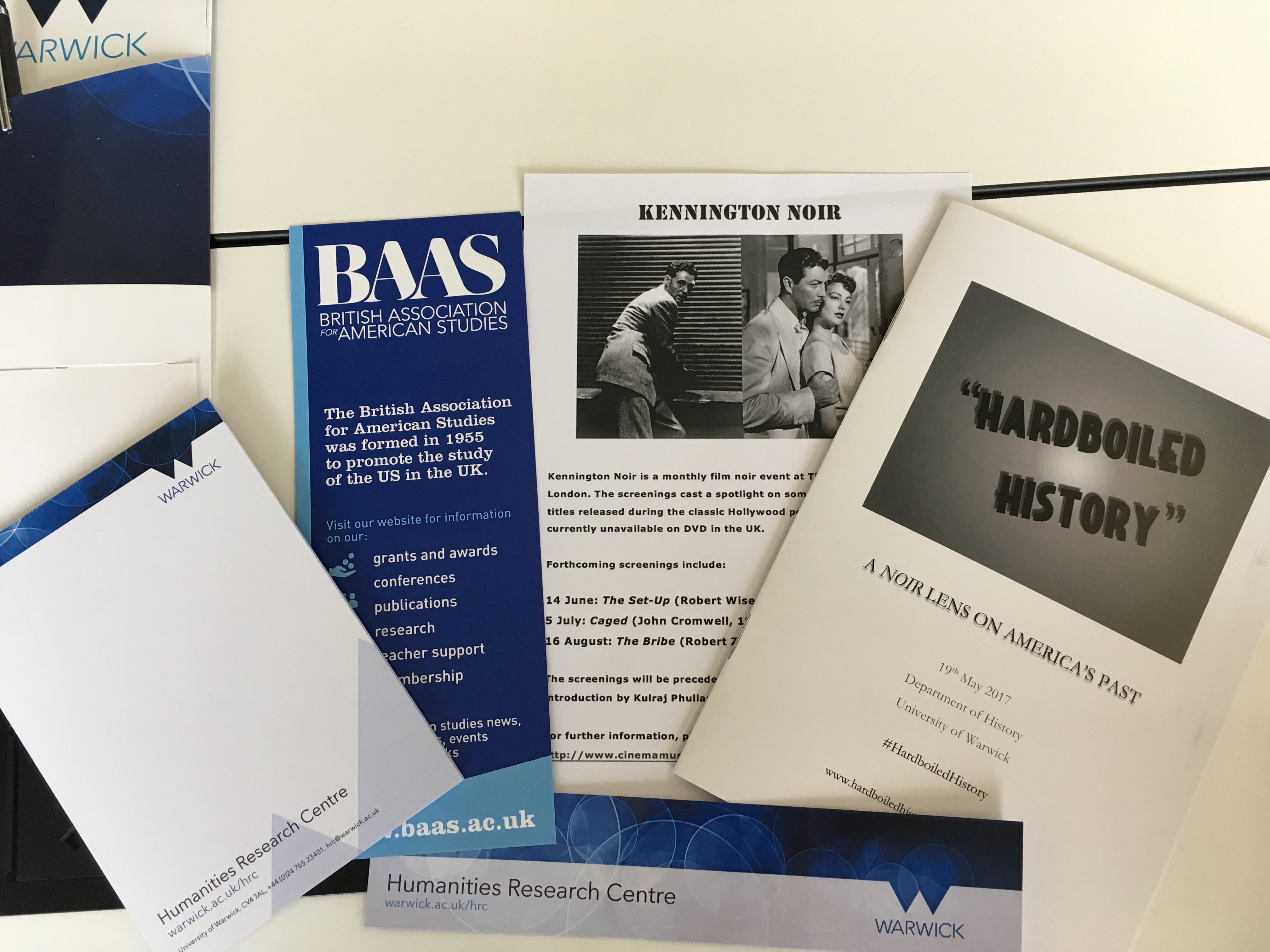 ‘Hardboiled History’ brought together a range of researchers from numerous academic backgrounds, including Literature, Film, Media and Cultural Studies, and provided an eclectic and well-planned itinerary. Opening remarks by J. E. Smyth (University of Warwick) provided a brief overview as to how the Hardboiled genre emerged in the United States, reminding attendees that although initially influenced by European artists and visionaries, the genre hinges on conceptions of the ‘dark underbelly’ of American society.  Beyond the superficial surface of early-twentieth-century Hollywood glitz and glamour lies an America torn in two over politics, amendment rights, civil liberties, race and ethnicity. The darkness of noir is as relevant today as it was a hundred years ago.

The first panel of the day set the contextual, geographical and socio-political scene of the Hardboiled genre.  Alex Pavey (University College London) and Thomas Travers (Birkbeck, University of London) explored the importance of the cityscape in historical noir, whilst Michael Docherty (University of Kent) looked at the inclusion of iconic Zoot Suits in the computer game Grim Fandango (1998) as a representation of Mexican Americans as second class citizens within an underworld setting. Docherty’s paper highlighted the ‘othering’ of Mexican-Americans, with their portrayal in the game being displayed from a White American viewpoint and not an authentic reflection of true Mexican American history or culture. 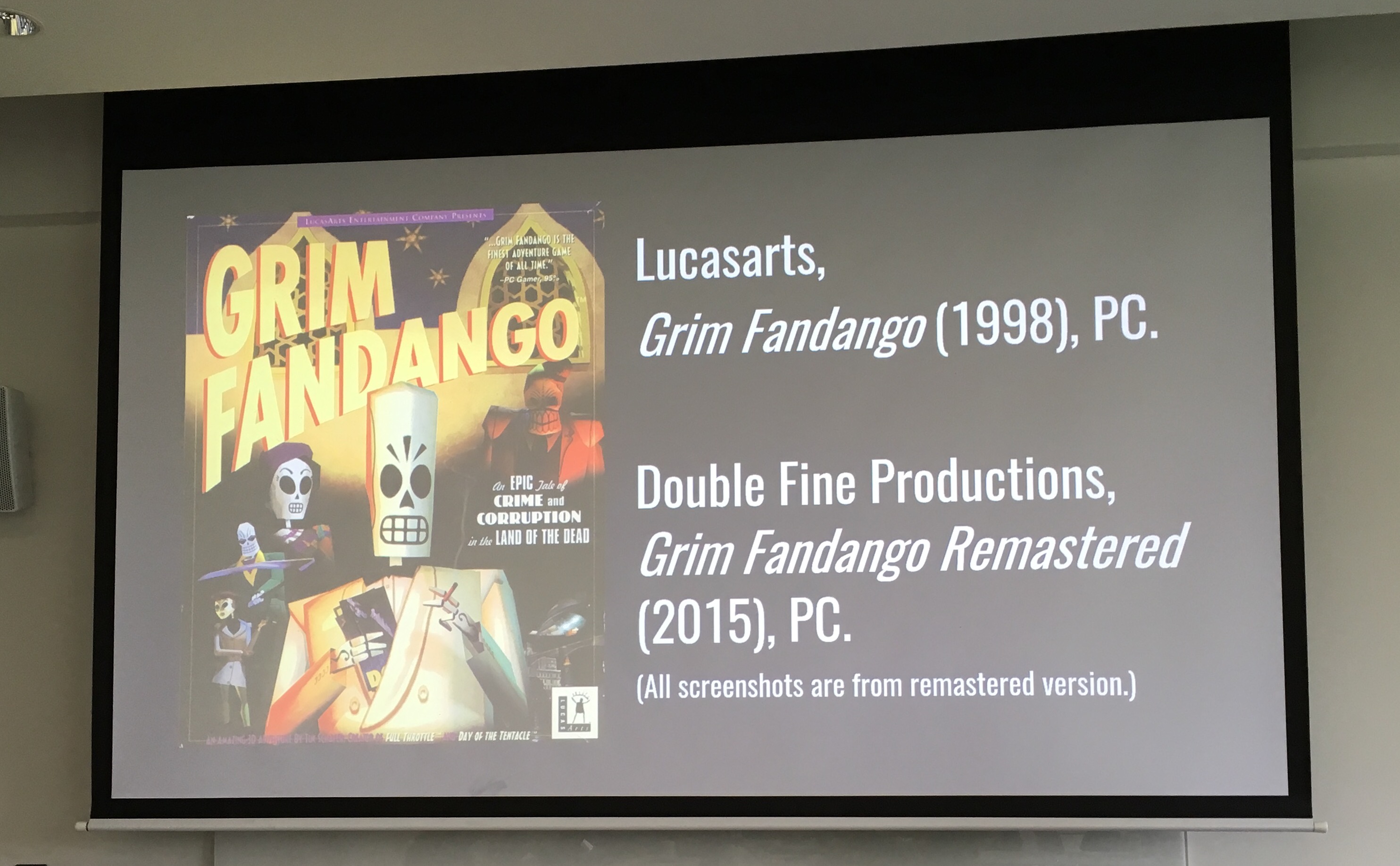 Women were also discussed as another ‘othered’ group within American society, with ‘The “Historical” Female Body’ panel exploring the construction of the femme fatale within noir movies and video games.  Katherine Farrimond  (University of Sussex) and Esther Wright (University of Warwick) both highlighted the violence towards women on screen and in games, and noted the extensive use of women as corpses within the genre. They argued that this made the gender almost invisible in terms of individual agency, and certainly impersonal as victims of crime.  Kulraj Phullar (King’s College London) gave an impressive talk on the character of Veronica Lake in LA Confidential (1997), noting how even her peek-a-book hairstyle was reflective of the duality of the hidden/ unhidden nature of noir.  The overall impression of this panel was that women are somehow hidden in plain sight, paradoxically overlooked and exploited at the same time, and certainly gave food for thought. 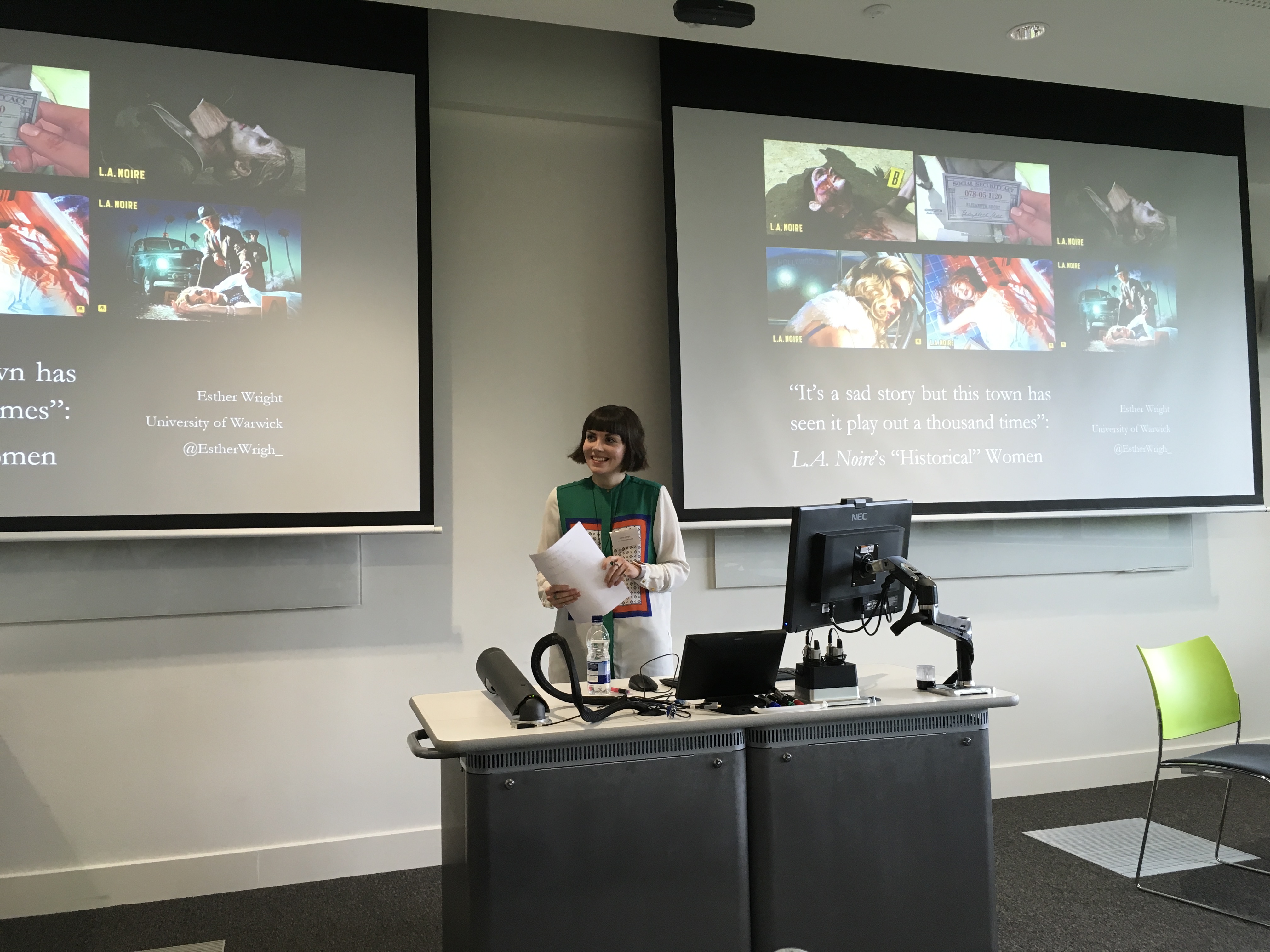 Esther Wright focused on representations of women in L.A. Noire (2011)

The first keynote address was given by Helen Hanson (University of Exeter) and focused on her research of how innovation occurs within the hierarchies of movie production.  Examining the roles of all involved in bringing movies to production, Hanson likened production culture to that of an orchestra, whereby the director is the conductor to the multiple roles—from writing to lighting to storytelling—producing a genre movie within the constraints of the cast and budget. Her examination of Hollywood methodologies in creating noir stories was a fascinating insight into the production and evolution of serial narratives.

Building on keynote discussions and that of previous panels, ‘New and Old Fatale Figures’ showed how the femme fatale has evolved in terms of contemporary and futuristic narrative settings. Agata Frymus (University of York) gave an interesting insight into the life and marriages of Rita Hayworth—hailed as a femme fatale icon in her heyday—while Scott Stoddart (Saint Peter’s University) addressed filmic examples in the comparison of Laura (1944) and Gone Girl (2014) and found striking familiarities, showing us that the trope is not restricted to nostalgic productions.  Maxine Gee (University of York) continued the focus on contemporary films, with her excellent talk on the subversive noir tropes within Ex Machina (2015) demonstrating the enduring legacy of the noir, even set far into the future in the world of artificial intelligence.

The final panel of the day looked at noir in its many forms and guises on television and throughout history. Mareike Jenner (Anglia Ruskin University) discussed ‘Sunshine Noir and 1980s Television’, using examples such as Magnum PI (1980-1988) and Miami Vice (1984-1990) as representative of hardboiled stories told in sunny settings.  While many of these detective stories have been set in the sunny climes of Los Angeles, as highlighted at the start of the conference, audiences tend to associate noir with a darker, shadow laden world.  Jenner’s paper gave examples of how noir storytelling was re-packaged, juxtaposing light and dark and post-Vietnam trauma/heroism.  Although less sophisticated than the ‘film noir’ of the earlier decades, the ‘sunshine noir’ of the 1980s certainly emulated whilst revising its conventions and tropes.  Examining Stranger on the Third Floor (1940), Greg Keenan (University of Sheffield) took us on a journey through the history of noir through to mythic noir.  Keenan questioned, ‘what is noir?’, critiquing both the film and the overall genre and interrogating the usefulness of the category. Lindsay Steenberg (Oxford Brookes University) pushed understanding of conventional noir characters further with the introduction of the homme fatale.  Using The Fall (2013- ) as an example, Steenberg described the homme fatale as a male serial killer who differed from the femme fatale in numerous ways.  Where the traditional female trope is over sexualised and often the victim of violence, the male version is ordinary and the perpetrator of violence.  Moreover, the femme fatale is a childless, cold hearted woman, whilst the homme fatale hides his psychopathy behind the façade of being a loving father and husband, described as a ‘tortured torturer’. 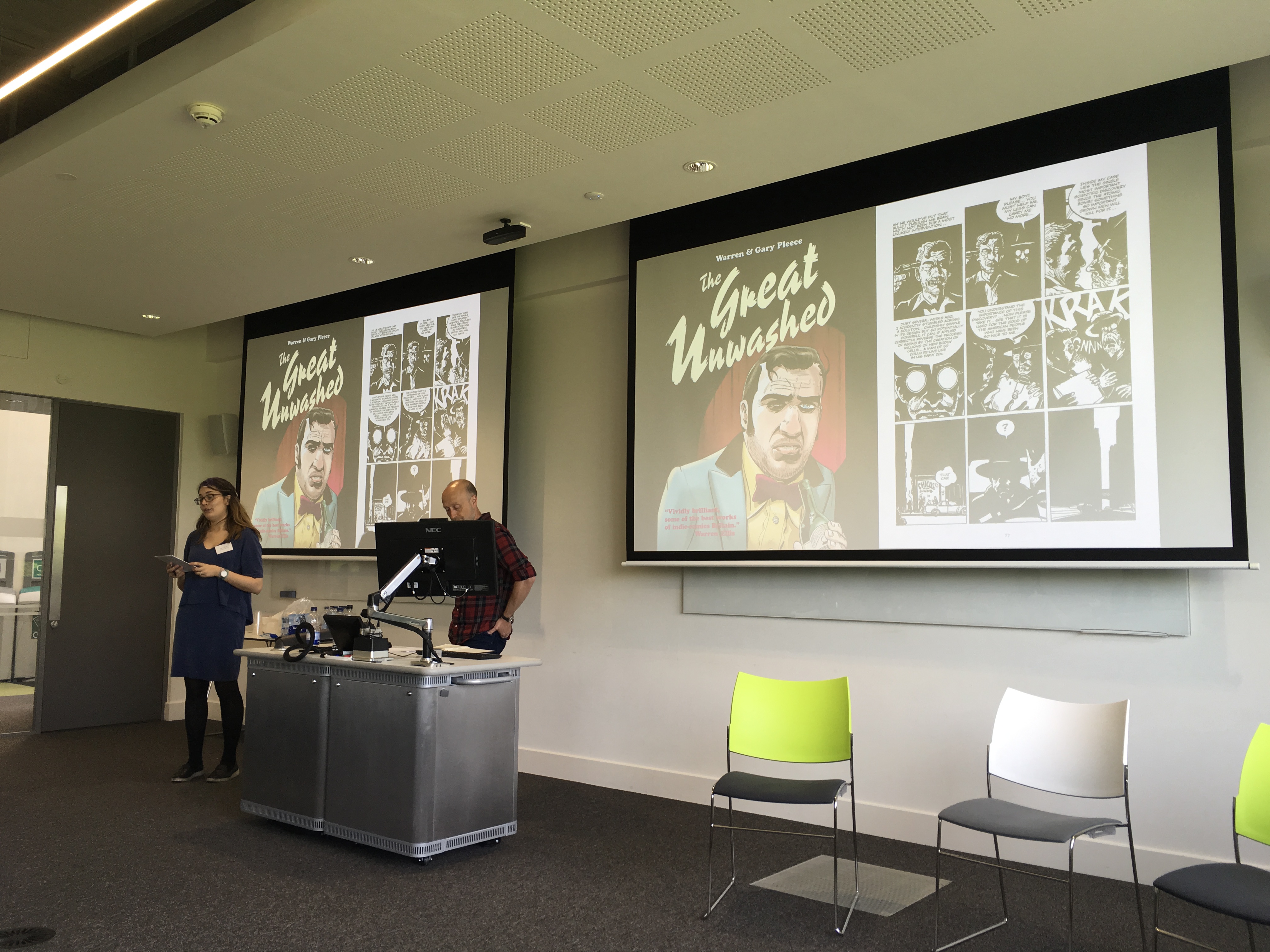 Warren Pleece delivers the final keynote address of the event

The final keynote was delivered by the only non-academic presenter of the day, Warren Pleece (Vertigo/DC Comics).  Pleece, a graphic artist whose work has been heavily influenced by the black and white imagery of the genre, discussed his career progression and artistic development in relation to the genre.  Examples of his work demonstrated a sense of mise-en-scene, and a sixteen-framed story of a man on a train, with no dialogue, provided a sense of familiarity and demonstrated parallels with the classic tropes of Hollywood noir.

At the end of the day it wasn’t just Warren Pleece who was inspired to revisit the genre. As I headed back to London on the train, I re-watched Double Indemnity (1944), and lost myself in the classic, appreciating the noir lens just that little bit more. The conference emphasised the continued relevance of noir in American culture.  From literature to movies to computer games, the genre continues to inspire artists and audiences.  Traditionally, the genre has been somewhat overlooked, but the event highlighted just how relevant and applicable the genre is in contemporary studies.  Consideration of the genre, then, allows for the application of new perspectives and approaches to research.  As J. E. Smyth highlighted in her opening remarks, America’s current events provide examples of the genre’s value in the contemporary context, and the panels, discussions and critiques of the day certainly reaffirmed this.

Sharon is currently a PhD student at UCL, where her work looks at gender representation of women on screen in political movies, from 1930s to present day, and examines the development of character in line with development of women in real-life politics. Her wider research interests include: media, women’s history, women’s rights, gender portrayals in film and politics.
View all posts by Sharon Betts →
Tagged  C20, Crime Fiction, Detective Fiction, Film Noir, Hardboiled Fiction, Social Anxieties, Video Games.
Bookmark the permalink.