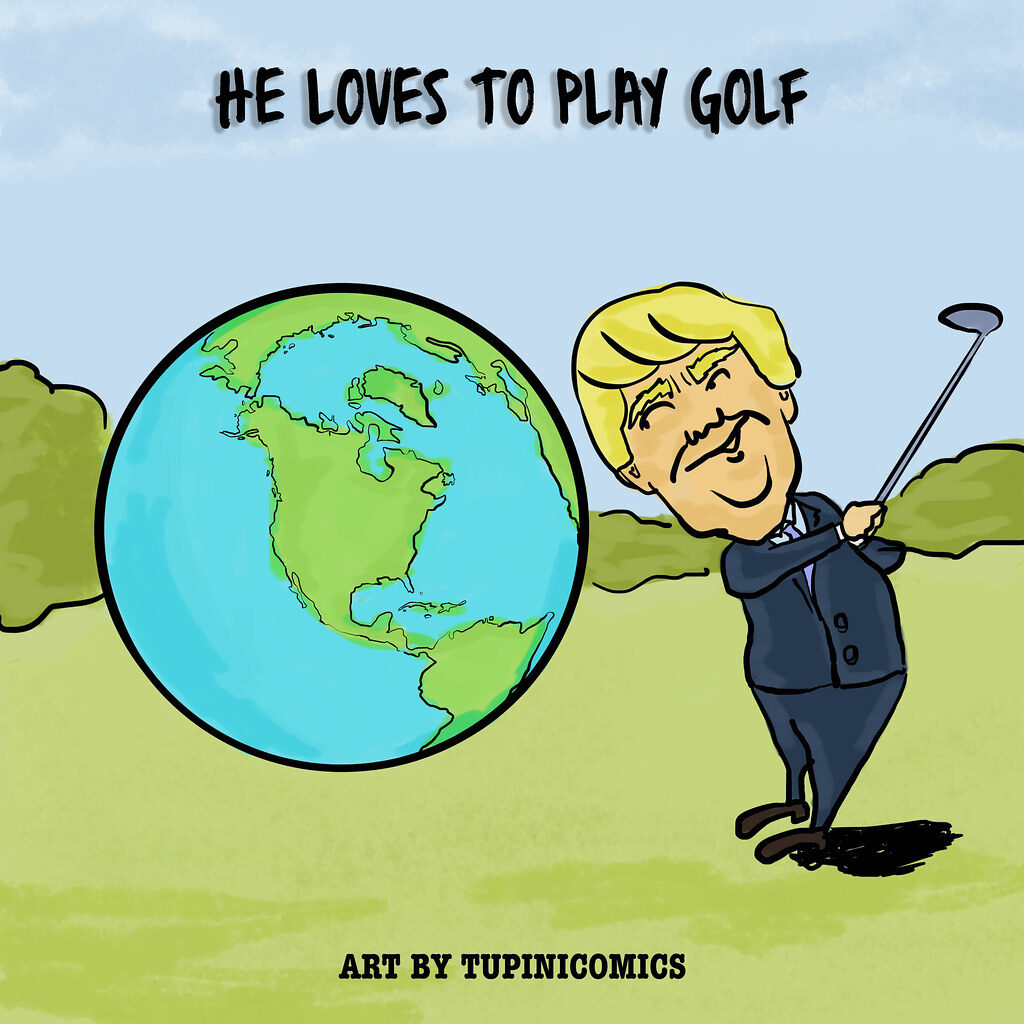 While America might seem tied up in that tiny white golf ball, it hasn’t always been this way. Golf is another of the New World’s ‘Old World’ borrowings. According to the OED the game is of “considerable antiquity in Scotland”. It lends power, lineage, and legitimacy, and so it lends presidency. Trump, despite his usual twitter-friendly lexicon, recently used the definition to his own ends at the Trump National Golf Course in Sterling, Virginia, where he went to play after President-elect Joe Biden’s projected win.[1] It’s one thing for a President to play golf, but what does it mean for a President to turn to the sport in the immediate aftermath of his failure to regain office? The usual claims that golf offers respite from reality, a smooth deflection from abrupt decision-making, or a strategic space to strike up business deals all take a sinister twist. Was Trump trying to claim some of its ceremony where his was being stripped? Was he in denial? Was he out to plan his next strategy in a game that relies on careful plotting? Or is all this just speculation, like a bet, lucrative only to the man who wants our attention, and perhaps some self-advertising for his seventeen golf-course strongholds.

Golf has had a cross-party appeal to American presidents over the years. From Woodrow Wilson and Dwight D. Eisenhower to Bill Clinton, the nation’s heads of states have all found different reasons to play. For Johnson it was the privacy of the grounds: prime spots for the deals and counter-deals that go with politics. Clinton found a reparative peace on the polished lawns.[2] It’s now old news that Trump repeatedly criticised President Barack Obama for spending too much time on the golf course, but with the sport’s historical links to segregation, his being there was something quietly radical in the first place—at least before the 1990’s.[3] That there remains something both captivating and slightly mystifying about the sport might in fact have something to do with the spectacle it can make of power and legitimacy: of history at a large. The game is a sort of litmus test for politics, another course in which history’s myths and realities are at the same time made and put under scrutiny. What all the presidents mentioned previously have in common is that they played the game by the rules. In contrast, Trump is often accused of cheating at golf. [4]There are stories of his topping all his own club leader boards and finding underhand ways to gain his leads mid-play. As with fake-news, what Trump did was change long standing rules and so change the game itself. If we run with this, golf offers some intriguing, if somewhat speculative parallels with the new game he has started playing in politics.

While on the surface Trump was all about winning, his turn to golf on losing reminds us that he never really had an endgame. Hopping from one enterprise to the next, he ended up in power purely for the sake of it. The observation is much like the golf course’s design in which pars—the predicted number of shots it should take an expert golfer to pot any given hole—are set by established regulations, engrained over time. But while Trump is part of the pars’ lineage, he himself has little expertise. His eventual winning of the presidency was part tip off, with his father bailing out bad business deals along the way, and part serendipitous ride off the back of history’s course. He is less a player and more a passenger in a sport that mixes its image with leisure. As if all this might be part of the point, Trump continued his own game with transparency in his shifting play with responsibility when he eventually gained office.

The language of golf too, lends a strange significance to Trump’s conduct. Its lexicon—bogey, birdy, eagle, albatross—is familiar enough, but made strange from its real-world context. These terms denote a certain score in relation to the player keeping under or going over the set par. While to a golfer they would sound out pretty clear, the words feel, to the listener-in, more symbolic than specific, as if they represent a vagueness rather than a number. In Trump’s twitter-sphere, they might be those obviously false claims such as, “I WON THIS ELECTION, BY A LOT!”, whose meaning is only really clear to those who are playing Trump’s game.[5] Perhaps the most significant thing cheating speaks to in Trump’s Whitehouse is his revising the definition of work. Despite his trailblazing headline, “Make America Great Again”, and the promise of industry dragged along with it, his own work set a poor standard. His version of the self-made American man incorporated senseless tweets and dangerous misadvice, qualities that seem to have replaced the tireless, problem-solving, innovative nature of a leader hauling his country back to its best.

Back to the sport itself, if there is something characteristically modern which America has given to golf, it might be this blurring of work and play. The game’s roots in antiquity have been uprooted, so to speak, by their inclusion in the political sphere. In Adam McKay’s Vice, George W. Bush is seen teeing off right after calling for the invasion of Iraq. That swipe envisages all the casual recklessness of mixing office with pleasure. When Trump turned to golf after the long campaign trail of the 2020 election, it was less a retreat than a continuation of that campaign. The golf ball’s pockmarking for better aerodynamics might be the dimples of a melting pot or part of a space race. The lawn of any single course might be Gatsby’s green enterprise or the thousand suburban homes with women to whom Donald Trump pleaded, “like me, please”. This plea is one he might still be standing behind with his silver club, if he ever was. It’s hard to know what game he’s playing anymore.

[4] Reilly, Rick, “How and why Trump cheats at golf”, Golf, 2 April 2019. https://golf.com/lifestyle/celebrities/how-why-president-trump-cheats-golf-playing-tiger-woods/

[5] This tweet appeared on Trump’s twitter feed on 7 November 2020, followed by the site’s disclaimer “Official sources may not have called the race when this was Tweeted”.

Conference Review: Sixth London Colloquium of the Native Studies Research Network
A Brief Consideration of the American Empire Through Modern and Contemporary Poetry
Fear is a Virus: Xenophobia in Mostafa Keshvari’s Corona (2020)
Book Review: Against Self-Reliance: The Arts of Dependence in the Early United States by William Hun...
Research Across Borders - As fragile as a metaphor: Constructing Edna St. Vincent Millay from the Li...
2017 in Review: Editors' Top Picks
Hollywood in the Age of Trump: USSO Special Series
Book Review: Literary Fiction: The Ways We Read Narrative Literature by Geir Farner

Lucy is a first year WRoCAH PhD candidate the the University of Leeds. My work in the School of English explores the poetry of Donald Hall and how American history is written through poetic texts. She competed her undergraduate degree in English literature at the University of Glasgow, and her M.Phil at Trinity College Dublin in Literatures of the Americas. Her previous research has included representations of grief in New England literary history, and the editorial relations of Raymond Carver.
View all posts by Lucy Cheseldine →
Bookmark the permalink.