Gae Pride Parades: The Impossibility of Queerness in Irish America at the St Patrick’s Day Parades

2015 marks twenty-five years since the Irish Lesbian and Gay Organization’s (ILGO) first application to march in New York City’s St Patrick’s Day parade on Fifth Avenue. Still the world’s largest celebration of the day, it was rejected by the event’s organizers, the Ancient Order of Hibernians (AOH), a Catholic Irish-American institution. Backed up by the Supreme Court, the AOH not only removed the ILGO from the parade, but also succeeded in barring the organization’s right to protest against its own exclusion on the basis that, “as the parade was a celebration of Irish ethnicity, the AOH had a right to discriminate against the ILGO, based on the tacit acceptance that an a priori condition of being Irish was an active intolerance of homosexuals, and therefore no expression of an identity that was simultaneously Irish and homosexual was possible” (O’Donnell 136).

The last twenty-five years have included ongoing queer exclusions in New York and Boston, court battles and rulings, sideline protests, countless arrests, and shamrock-pinned onlookers screaming, “Faggots. Queers. You’re not Irish. Your parents must be English!” The battle has become a milestone flashpoint in discussing Ireland and Irish America from the 1990s, yet the retelling of that conflict continues to embody a struggle of verisimilitude (a question of which or whose account of ‘Irishness’ becomes legitimate), of Irish-American conservatism against Ireland’s alleged progressiveness, and of finding one’s feet as an Irish queer abroad. The struggle is consistently conceived as a clash between conservative, Catholic, Irish-American natives and a group of young LGBT Irish immigrants (Mulligan 2008; O’Donnell 2007). Hetero Hibernians out of touch with modern Ireland in the blue corner, the Irish Lesbian and Gay Organization, totems of Ireland’s modernity, in the red. 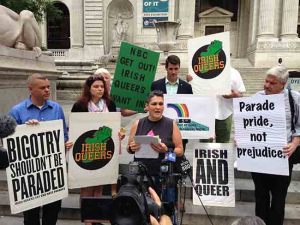 ‘The fear of homosexuality felt by conservative Irish Americans is as much rooted in American culture as in a simplified and heterosexualized view of Ireland or Irish identity.’

This conceptualization of the conflict, however, problematically conflates “Irish American” and “heterosexual,” thus invariably denying a space for queer Irish Americans. The narratives that are rarely read and the voices hardly heard are those of the queer Irish-American natives of the Bronx, Brooklyn and Queens, of “Southie” in Boston and of South Side in Chicago. What dissonant feelings of identity emerge for queer subjects raised in an ethnic community so globally imagined as staunchly Catholic, parochial, and as the parade conflict has evidenced, heterosexual?

“Ethnicity and sexuality,” Joane Nagel tells us, “are strained, but not strange bedfellows” (113). While the organizers of the St Patrick’s Day parades in New York and Boston have labored intensely to suppress articulations of (queer) sexuality from these platforms of ethnic representation, the panicked response of the conservative AOH and its Irish-American supporters perversely reveals a seemingly paradoxical truth: the parade itself as well as the ethnicity being paraded are entirely entrenched in sex and sexuality. According to Nagel, normative heterosexuality is crucial in maintaining racial, ethnic and national ideologies and regimes, and adherence to that norm as well as the prohibition against deviation from it are essential to the endurance of those systems (108). The boundaries of Irish-American ethnicity, particularly in the public displays of ethnic pride, are fiercely policed and protected from external (but also internal) enemies and others who cause a threat to the stability of the community’s contours.

In order to know “who we are,” we must know who “they” are and know that we are not part of the same family. The fear of homosexuality felt by conservative Irish Americans is as much rooted in American culture as in a simplified and heterosexualized view of Ireland or Irish identity. As Carl Stychin has pointed out in his discussion on the exclusion of the Irish American Gay, Lesbian and Bisexual Group of Boston from the heavily Irish South Boston parade and the landmark case that followed, the parade is a “quintessential ritual of American national life” (265). For the Catholic pre- and post-Famine Irish immigrants, the St Patrick’s Day parade –a North American invention- became an important vehicle to fight Protestant nativist anti-Irish sentiments and to demand full respect and citizenship in their new home. By 1858, as Mary Ryan has pointed out, parading in America “had become almost synonymous with the ethnic label Irish-American” (146). The parades have always reflected the local entanglements and lateral affinities of (Irish) America.

Stychin also suggests an important moment in twentieth-century American history that augmented already-established anxieties over homosexuality in the US: “In the 1940s and 50s, the dominant discourses of both anti-Communism and anti-homosexuality emphasized dangers to ‘national security and national welfare’, emanating from both within and outside the nation” (276). “In this regard,” Stychin claims, “there is considerable historical evidence to suggest that American ideology has long connected homosexuality, foreignness, and threats to the nation” (276). Consequently, in the Irish-American struggle towards acceptability and acceptance in America, “a rejection of the homosexual as ‘other’ to group identity is comprehensible and predictable” (276).

The arrival of the ILGO coincided rather uncomfortably, at least for traditional Irish Americans, with the intensification and contentious American response to AIDS. Perceived as a foreign threat to the nation during the Cold War, the homosexual in the 1980s and 1990s was now a contagious threat to the health of the national body. Anti-gay sentiments and aggression were nationwide realities, but the staunchly Catholic heterosexual (and homophobic) Irish Americans, in particular, embodied so grotesquely in the insidious New York City Cardinal John Joseph O’Connor, stood along the parade barricades taunting the ILGO members and queer activists, screaming, “Die faggots! Get AIDS and die” and “AIDS! AIDS!” as if they could will the disease on the group[1]. ILGO was initially eliminated from marching in the main parade, and then excluded from marching at all, barred from protesting against its exclusion, and ultimately erased from the public display of Irish-American ethnic and national pride on March 17.

Drawing on the power of speech acts, Madhavi Sundar sees the parades as “discursive spaces,” where Irish-American identity is not only (re)presented but also constituted, and claims that the exclusion of self-identified gays and lesbians transcends the physical boundaries of the parade limits and culminates precisely in the complete effacement of queer sexuality and desire from the “idea” or message of the parade (144). Sunder defines this message as the construction of an Irish-American narrative and identity, thus confirming not just the physical barring of GLIB or ILGO, but the violent erasure of the idea or possibility of queerness in Irish America entirely. 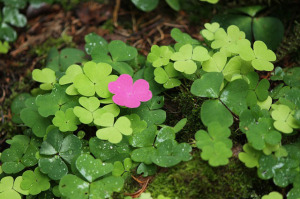 ‘The parade’s function within Irish America has always been to forge, communicate and reinforce the frontiers of an ethnic identity’

Interestingly, this year also witnesses a controversial twist in the parade struggle: the committee announced on September 3 2014 that Out@NBCUniversal would be the first self-identified LGBT group to march under its own banner in the parade’s history. The vice chairman of the New York City St Patrick’s Day Parade Committee, Dr John Lahey, remarks that the focus of this year should be both the “gesture of goodwill [extended by the Committee] towards the gay community.” [2] Niall O’Dowd of Irish Central has, rather uncritically, hailed the decision as profoundly progressive, going as far as to suggest that the Irish-American community will “never be the same again after 253 years” and that “the war weariness around the issue of gays in the parade has finally lifted and everyone seems ready to move on.” [3]

While the hitherto staunchly conservative committee’s agreement to lift the ban on the participation of self-identified gays and lesbians was for most a stunning exercise of generosity, the move becomes less strange, however, when we remember that NBCUniversal is responsible for broadcasting the parade on the day. The decision, argues Mary Emily O’Hara in The Huffington Post, “smacks of boardroom-deal striking and concession.”[4] Still unrecovered from Guinness’ and Heineken’s withdrawal of their sponsorship in 2013 in response to the exclusion of gays and lesbians, the parade organizers’ “gesture of goodwill” should be critically scrutinized as an obligation rather than choice. Moreover, as O’Hara has rightly pointed out, the inclusion of one corporate LGBT group does not ameliorate the painful feelings of perpetual erasure experienced by Irish LGBT groups and individuals: “There will be no Irish Queers, no Irish Lesbian and Gay Organization, no banner or representation of any Irish LGBT community group” (O’Hara).

Most critically, with this move, we must ask whether the inclusion of a corporate LGBT group necessarily serves the aims of conservative forces to present and reinforce an image of the sanitized, depoliticized and desexualized consumerist/capitalist gay and lesbian in place of a more radical, (positively) disruptive and queer “numberless family of perverts” (Foucault 40) in the interest of hetero- and homonormative agendas. As Begonya Enguix, among others, has shown, the Gay Pride parades regularly fall victim to the same sanitization of precarious or promiscuous sexuality (2009), no doubt a consequence of the vanishing radical queer activism of the 1980s and 1990s (Queer Nation, ACT UP, Lesbian Avengers) and the recent global campaigns for marriage equality. The (forced) inclusion of OUT@NBCUniversal is possible because the containment of the group’s activity within the parameters of its corporation identity does not necessarily trouble the boundaries of Irish-American ethnic identity or (hetero)sexuality.

The parade’s function within Irish America has always been to forge, communicate and reinforce the frontiers of an ethnic identity, a division between “us” and “them,” a call for unity, a demand for inclusion and a force of exclusion. Queerness as an act of sexual difference rather than an identity of sexual sameness or unity (as is routinely celebrated in conventional gay and lesbian discourse) in Irish America provides a positive productive and non-reproductive rupture in the fantasy of heterosexual “sameness” in the community.

Foucault, Michel. The History of Sexuality Volume 1: The Will to Knowledge. London: Penguin, 1976. Print.

From Harlem to Texas: African American Art and the Murals of Aaron Douglas
"Born in the USA": Birtherism and the US Presidency
Taking Notice: Nature and Climate Change Deniers in American Climate Fiction
“Money, That’s What I Want”: Who Benefitted from the Crossover of African American Musicians in the ...
William Faulkner by Kirk Curnutt
Reality Check or Business as Usual? COVID-19 and the Future of U.S. Capitalism
‘Homo Abominum Americana’: The cultural tradition of the vampire in Snyder and Albuquerque’s America...
As American as Apple Pie: U.S. Female Converts to Islam

Following three years in Berlin after his MA in Gender, Sexuality and Culture from University College Dublin, Gavin was awarded the Irish Research Council Government of Ireland Postgraduate Scholarship in 2014 to carry out his PhD at the School of English in Trinity College Dublin. Gavin's project, the first comprehensive analysis of queer Irish-American literature and culture, aims to counter the alleged impossibility of queerness in Irish America by highlighting the radical potential of non-normative sexualities to interrogate and unravel heterocentric systems of gender, kinship and home in the diaspora.
View all posts by Gavin Doyle →
Tagged  C21, Gender and Sexuality, LGBT, Politics.
Bookmark the permalink.