Home » Research » Culture » Finding “Native America” in Jazz: The History of “Native Sound” in Jazz throughout the Decades

Finding “Native America” in Jazz: The History of “Native Sound” in Jazz throughout the Decades

To look at jazz’s preeminent players and albums, or its popular historical narratives, one would think a “Native American” had never picked up a horn. Indeed, finding Native Americanism in a so thoroughly African-American art form may seem offbeat even for jazz. Yet a “Native jazz” tradition does exist— has done so, in fact, since the early days of jazz.

That Native jazz exists shouldn’t really surprise us, given the common thematic ground (homesickness, hardship, heritage) between African and Native American cultures— given also the abundance of historical African-Native intersections, as established within extant African-Native American studies. Forbes was the first to consider such intersections, tracking them back into pre-colonial times. In his wake, Brennan et al established an African-Native literary canon reaching from animalist folklore to Alice Walker. In Brennan’s culturally oriented wake in turn, I outline and historicize here the African-Native musical form that is Native jazz.[1]

Back in the big band 1930s era, an immediate Native presence wasn’t forthcoming. True, one Mildred Bailey [tribe: Coeur d’Alene] was a preeminent jazz vocalist, known as nothing less than ‘Mrs. Swing’ (alongside her bandleader husband ‘Mr. Swing’ Red Norvo: appositely named, but no Native blood); but her background didn’t factor into her material. (Here, incidentally, are the Swings in performance.) But certain white composers sought to evoke Native America palpably in their compositions. Let me briefly explicate this crude “red jazz” via four pieces: ‘Song of India’ (Tommy Dorsey Orchestra); ‘Indian Love Call’ (Artie Shaw Orchestra); and ‘Redskin Rumba’ and ‘Cherokee’ (both Charlie Barnet Orchestra). 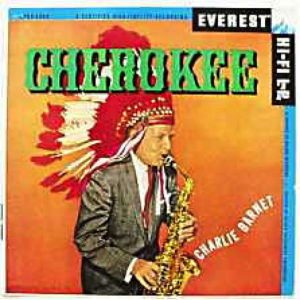 Two instruments are privileged in red jazz: the muted trombone, as solo instrument [‘Song’] and vanguards of the killer riff in ‘Rumba’ and ‘Cherokee’; and the clarinet, which figures the eponymous Indian love call of that track. In privileging muted trombone and clarinet, red jazz equates Native America, its “voice”, with the lightness and breathiness of those instruments: in so doing— and deliberately, I think— red jazz promulgates a “vanishing Indian” trope. Chromatic patterns (cf. the solo trombone in ‘Song’) and repetition (cf. the ‘wah-wah’ trumpets of ‘Cherokee’ and ‘Rumba’, the opening drum riff of ‘Love Call’) also typify red jazz: thus, I think, does the genre aggrandize the simpler, ritualistic aspects of Native culture. Such a reductive approach is belied the clearer by the lyrics of ‘Love Call’ [from 2.00]: no mention of “Indian” or similar; and Native language becomes simple scat (those “dip-de-dip” fills), after earlier ‘yips’ from the whole band [0.50s].

Between the ‘30s and the ‘60s, Native America remained incidental within mainstream jazz. Many famous players had Native roots— Charlie Parker had Choctaw roots; Miles Davis, Cherokee— but this rarely entered into their work. The bassist Oscar Pettiford is an exception here: as his widow would put it, Pettiford ‘contended that the importance of the American Indian to jazz has been underestimated if not completely overlooked.’ Nevertheless, his theories on jazz’s “Indian rhythms” remained his own.

Artists from the ‘70s onwards inculcated a conscientious Native jazz. The genre’s leading light was Jim Pepper [Muscogee-Creek/Kaw], a pioneering fusion jazz bandleader and, intermittently throughout his career, Native rights activist. I will also consider two other major Native jazz players who continue this aesthetic into the ‘90s: pianist Don Pullen [Cherokee], and bassist William Parker [Choctaw]. For now though, I would like to concentrate upon— and deconstruct— Pepper’s Native jazz album of ‘71 Pepper’s Pow-Wow. I will first identify Pow-Wow’s authentic Native elements, and then evaluate Pepper’s success in fusing and fashioning a Native jazz aesthetic. 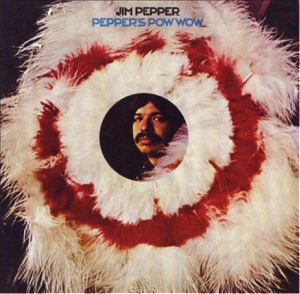 Foremost among Pow-Wow’s authentic Native elements is its almanac of Native language— from chants (cf. the eponymous chants of ‘Witchitai-To’ and ‘Yon A Ho’) to dialectal call-and-response (‘Rock Stomp Indian Style’). Repetition evokes ritualism here as it does in red jazz. Pepper’s flute shares the reedy nature and timbre of much Native instrumentation, and tribal rattles govern much of ‘Slow War Dance’ and ‘Stomp’. ‘Senecas’ and ‘Drums’ tackle very pertinent Native grievances: land-rights disputes, and educational integrationism.

But how convincing is Pepper’s Native/jazz fusion? Sometimes, Pepper missteps. Free jazz is ugly even in its best instances, let alone ‘New War Dance’. Soft rock (jazz’s generic cousin) pervades harmonies, chord progressions, and solo stylistics throughout: Pow-Wow thus teeters often upon a Kenny G’s-Songbird-event horizon of melodrama. And for ‘Senecas’ and ‘Drums’, Pepper switches to a country-music mode: steel guitars, Cash-esque vocals, and balladic lyrical form. Whatever their virtues, these are not jazz elements.

Generally, though, this Native jazz aesthetic works. Bluesy solos and riffs (cf. the setting of the eponymous ‘Yon A Ho’ chant) and honky-tonk piano styling (cf. ‘Senecas’) attain, in the playing, another “redder” hue; and, alongside dialectal hollers, they convincingly retool the traditional gospel tune ‘When The Roll is Called Up Yonder’ into Pepper’s ‘Nommie-Nommie’. It is creditable too how Pepper marries Native and jazz instruments. Flute co-exists gracefully with soprano/tenor saxophone (cf. especially the late flute → saxophone segue in ‘Squaw Song’), and hovers nicely above the ritualistic bass-piano thumps of ‘Senecas’.

Pepper’s original Native jazz aesthetic governs also Don Pullen (Cherokee, pianist) and William Pepper (Choctaw, bassist)’s work. Although he came late to exploring Native America in music (playing primarily with one ‘African-Brazilian Connection’), Pullen took earnestly to a ‘95 collaboration with the Chief Cliff singers [Kootenai]. ‘The Eagle Staff is First’ is the first track of their album Sacred Common Ground: as in Pepper, the blues acquires an additional “redness” (cf. the repeated instrumental 4-bar riff), and the Connection’s vocal emergence underneath the Cliff Singers feels nicely organic. Parker “went Native” intermittently throughout his career, with variable success. ‘The Peach Orchard’ is a commendably conscientious soundscape of New Mexico Navajo/U.S. Army tensions: here, perhaps, is the ‘Senecas’/ ‘Drums’ model writ large (over 20 minutes, to be precise). But in ‘Aquixo Waiting at Dark Corner’, a soundscape of de Soto’s C15 explorers contending with Mississippi Natives, Parker eschews evocative guitarros and the like for a free jazz evocation of conflict: Pepper’s ill-conceived ‘New War Dance’ redux. 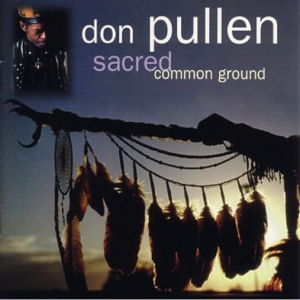 Outside of the “3Ps”, the tendency in Native jazz has been towards ever greater fusion with other traditions— often at the expense of a distinct Native Americanism. In Music for a Fifth World [‘92], John DeJohnette errs markedly more towards the Western-generic end of things than Pepper does: ‘Two Guitar Chant’ starts well, but loses the Native flavor at 1.20. Elsewhere, I would aver that the Redhouse Family Band (“Arizona’s American Indian first family of jazz”) jacks in all trades but masters none: consider the sheer range of instruments in ‘Sparky’s Theme’ [listed at 0.12]. Damningly, moreover, the world percussion here gets solo time [esp. 7.30 onwards] that the Native flute does not.

Balancing his art more finely than these, and retaining a distinct Native character, is Raymond Carlos Nakai [Navajo/Ute]. In his namesake quartet’s album Kokopelli’s Café (’96), Native percussion proves surprisingly amenable towards Latin jazz rhythms (cf. track 5: ‘Night of the Chupacabras’ and 10: ‘Secular Philosophy’); likewise the cedar flute to montuno (1: ‘Kokopelli’s Café’), bossa nova (6: ‘Whippoorwill’) and guitarro (3: ‘Mo’combo Gumbo’) stylistics. Ultimately, then, Native America has a place not only within an African-American music, but also alongside another ethnic [Latin] variant of the same. One might think of the Black Seminoles in their Hispanic environs, and compare idly or earnestly as preferred. In any case, be sure to give Native jazz (literal) fair hearing.

[1] In literature, for the record, only Sherman Alexie’s Reservation Blues foregrounds any kind of African-Native musical interplay; but even then Alexie merges “pure” blues with commercial rock-and-roll, and privileges the musicians, a “Natives on tour” angle, over the music itself. Also, for a one-page primer on historical African-Native interactions (including the Native branch of the slave trade), cf. William Loren Katz, ‘Africans and Indians: Only in America’: http://www.ipoaa.com/africans_indians_only_america.htm.

Teaching America 'Online': Designing and delivering the Online Distance course ‘A History of the Blu...
60 Seconds with Maria Elena Carpintero Torres-Quevedo
60 Seconds With Sylvia Ellis
My Archival Adventure as an Academic Researcher across the Atlantic
"In U.S. Cities or on Palestine's Streets" - A Black-Palestinian Narration of Subaltern Geographies
Review: 'Legacies and Lifespans: Contemporary Women’s Writing in the 21st Century'
Obama’s West Point Vision: Or, How to Retreat from Military Intervention and Democracy Promotion
Review: Faulkner and Yoknapatawpha 2018: Faulkner and Slavery