The image might be a familiar one. A group of screenwriters found in contempt of Congress for refusing to reveal their political affiliations before the House Un-American Activities Committee (HUAC) were photographed in 1950 protesting their imminent incarcerations. Under a banner demanding a presidential pardon, signs recorded the names of the individuals set to go to jail and implored the public to help free the group that had come be to known as the ‘Hollywood Ten’. One of those ‘ten’ was Dalton Trumbo. Wearing a light, pin-stripe suit, bow tie and glasses, he stands in the middle of the frame. Freezing in time a portrait of a unified Hollywood left, the presence of Trumbo’s two young children, straining to hold up the sign bearing his name, lends the image its added pathos.

Working from Bruce Cook’s recently re-issued biography, Trumbo (2015) follows Communist Party member Dalton Trumbo (Bryan Cranston) from his appearance before HUAC in 1947 through his jailing, his years writing screenplays pseudonymously, and, finally, his blacklist-breaking accreditation as the writer of both Spartacus (1960) and Exodus (1960). Midway through the film director Jay Roach recreates the moment that familiar protest photograph was taken and his film is at its best when it seizes on the pathos of the image by focusing on the writer’s family as they struggle to hold him afloat. Trumbo falls prey to some of the familiar tropes of Hollywood-on-Hollywood biopics, allowing the audience one too many opportunities to nod and purr knowingly at extended impressions of Golden Age stars. However, the film achieves an unexpected pep and levity when it reveals backstage shenanigans and dwells on the dramatic irony that, while cast out of Hollywood, Trumbo ‘won’ two Academy Awards for Roman Holiday (1953) and The Brave One (1956). Trumbo might have been a very enjoyable portrait of one man’s blacklist, yet, by trying to cover, perhaps, more than is possible, Roach and screenwriter John McNamara shrink away from the complexities of the period. In turn, they end up offering a rather incomplete portrait of both the era and Trumbo. 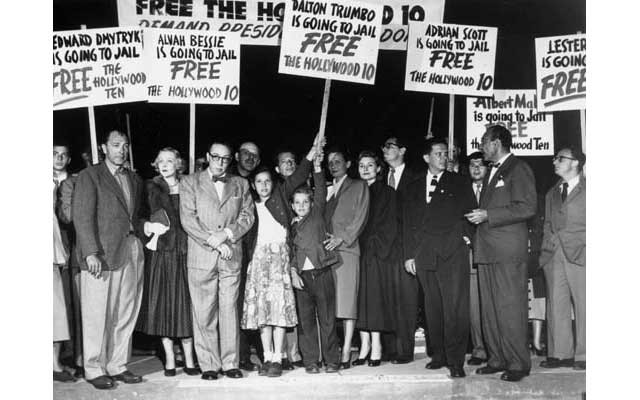 Members of the Hollywood Ten protesting their imminent incarcerations. Source: Caught in the Crossfire: Adrian Scott and the Politics of Americanism in the 1940s by Jennifer E. Langdon.

Roach is clearly fascinated by the blacklist and keen to display his research. Across Trumbo, he weaves in or lightly doctors artifacts and archival footage, from testimonies before HUAC to extended clips from Trumbo’s films. At times, this stretches our credulity; in Trumbo television screens are seemingly ubiquitous and forever tuned to reveal an unexpected but perfectly timed update on blacklisting to frustrate our hero or infuriate our villain, the anti-Communist gossip columnist Hedda Hopper (Helen Mirren, in full Cruella De Vil). However, this heavy-handed visual footnoting, rather than illuminating the era, raises unanswered questions. Nowhere is this more apparent than in Roach’s re-creation of the protest photograph: the other members of the Hollywood Ten are not a presence in Trumbo and do not even have speaking lines. Instead, Trumbo creates a fictional radical screenwriter, Arlen Hird (Louis C.K.). A composite of the Hollywood Ten, it is apparent from Hird’s first cough that he is there to act as martyr and symbolise the artists who failed to weather the blacklist.  Trumbo then contrasts Hird’s sacrifice, and Dalton’s principled stand, with the eventual capitulation to HUAC of liberal activist actor Edward G. Robinson (Michael Stuhlbarg).

It would be naïve to expect a biopic to comprehensively cover the competing interests, shifting alliances and distinct beliefs among those blacklisted, greylisted, or progressive Hollywood more broadly. However, Trumbo comes to conclusions about courage and cowardice without context and, as such, its oversights are worth exploring. Part of the problem is that Trumbo seems uncomfortable with Dalton’s politics. How else to explain a film with such a curious lack of interest in its protagonist’s beliefs beyond that in the sanctity of the First Amendment? In his biography, Cook notes that during early conversations he ‘skirted’ discussing Trumbo’s Party membership ‘as I thought it was an embarrassment between us’ (147). Trumbo also seems embarrassed, unsure if it should maintain the privacy Trumbo was jailed to protect or try to understand the politics that motivated him. It decides to do both half-heartedly.

An opening title card, ignoring the fissures within the Popular Front following the 1939 Nazi-Soviet Pact, tells us Trumbo joined the Communist Party in 1943, inspired by the hardships of the Great Depression and a desire to combat Fascism. Trumbo does not care to consider what attracted Dalton to the Party at that moment or why he would go on to leave, re-join, and leave again. Instead, Trumbo divorces Dalton from organized politics presenting him instead as a libertarian individualist. Communism is only explored in one scene, when Trumbo offers his daughter the hypothetical scenario that if she had a sandwich for lunch while another student at her school was hungry, if she was inclined to share the sandwich she is probably a Communist. The dialogue is reminiscent of Trumbo’s own Tender Comrade (1943), about women on the home front during World War II who pool their resources while their men are away. Within the hysterical mood of the post-war era, Hopper and others retrospectively found Ginger Rodgers’ dialogue imploring the girls to “share and share alike” evidence of Trumbo’s covert Communist propaganda. Bizarrely, although sympathetic to his subject, McNamara offers no more nuance to his portrait of progressive politics in the era than Trumbo’s accusers, as his screenplay’s vagaries serve to conflate all left-leaning views into banal platitudes. In turn, Trumbo ignores the range of political beliefs that existed in Hollywood and the divisions that made the question of how to react to HUAC quite so fraught and agonizing.

At times, Trumbo seems self-aware of its evasions and awkwardly tries to address them. Perhaps realizing that their film is as whitewashed as any from Trumbo’s era, McNamara and Roach clumsily introduce Virgil Brooks (Adewale Akinnuoye-Agbaje), an African American inmate Trumbo meets in prison. However, the screenplay stereotypes the character and then quickly dispatches him. (Trumbo is not interested in how the Red Scare complicated the lives of black Americans with ties to anti-racist organizations or curtailed the anti-discrimination filmmaking that sprang up in the immediate post-war era.)  Before he dies, Hird is given a few scenes in which he attempts to probe Trumbo’s conscience, asking Trumbo what he feels his artistic and political responsibilities are and questioning how he reconciles his wealth and his politics. Similarly, Robinson is allowed to briefly assert the difficulty navigating his status as a liberal charged as a Communist. Roach and McNarama are content to raise the specter of these conflicts rather than explore them. By killing off Hird, the film is able to silence the divisions that existed, and continued to exist, among those very different individuals that circumstance and hysteria bound together.

Drawing its characters in broad brushstrokes, Trumbo tries but is unable to sufficiently explain why the Hollywood left ended up cannibalizing itself. Victor S. Navasky referred to his study of the blacklist as a ‘moral detective story’ rather than a history (xv). The problem with Trumbo is that it presents a morality play without the detective work. Telling a story that is rousing but not thought provoking, Roach’s dizzying display of sources animates the past without insight. In turn, Trumbo misses the opportunity to focus on the very ambiguities and divisions that make the blacklist so intriguing and, ultimately, does a disservice to its subject.

Trumbo will be in cinemas in the UK from 5th February 2016.

Youth Politics and Dispelling the Image of The Terrible Turk with Selma Ekrem’s Autobiography, Unvei...
Documentary Review: The Black Panther Party: Vanguard of the Revolution
Review: PG BAAS Conference - Connection and Collective Action: Past and Present (Online)
60 Seconds With Joe Street
Teaching History and Theory through Popular Culture: My First Time Designing a Module
Creating Model Americans: The Mississippi Choctaw Billie Family and Relocation
Blogs on Togs: Dress History Research in an Overseas Archive
Review: The US and Us: American History in Britain in the Twenty-First Century