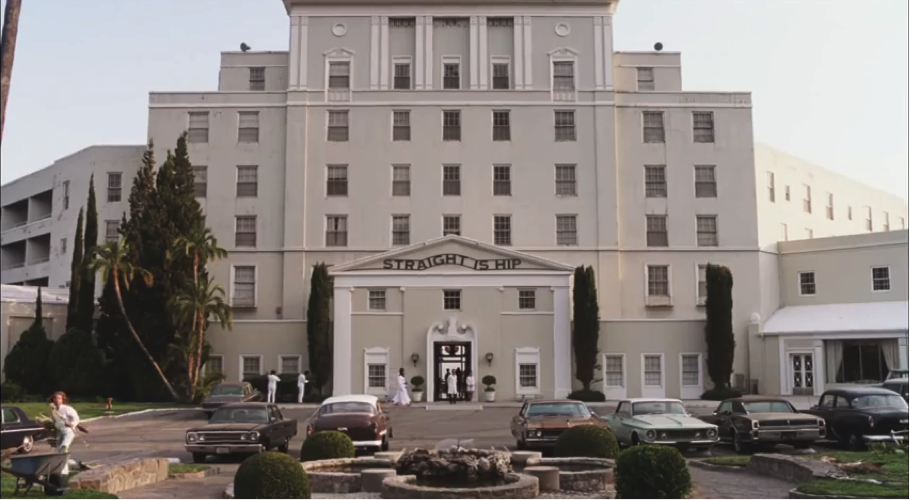 The Chryskylodon Institute, which means “Serenity” in an old Indian language. Or was it Greek for “Golden Fang”? Source: Noiselesschatter

This one’s all about the American Dream or, wait, am I, uh, hallucinating?

After 50 years of writing, and with numerous awards to his name, Thomas Pynchon has finally seen one of his novels adapted for the big screen. As a prominent American writer, Pynchon’s postmodern novels are well known for their sprawl and complexity, particularly the longer and critically acclaimed Gravity’s Rainbow (1973), Mason & Dixon (1997) and Against the Day (2006). Their dizzying narrative worlds and tendency towards tremendous tangent have proved particularly difficult for filmmakers to translate to cinema. Indeed, director Paul Thomas Anderson wanted to adapt the slightly simpler (or at least shorter) Vineland (1990), but could never figure out how. When Inherent Vice turned up in 2009, he immediately started writing a script. Inherent Vice is a morally ambiguous 1970s rendering of the private detective figure, who comes to us in the form of Larry “Doc” Sportello (Joaquin Phoenix). He’s more or less always stoned, and the “case” that the narrative focuses on doesn’t open with a murder, but rather with second-hand information on a (probable) kidnapping. It’s all a little uncertain. And that is saying something for a film inspired by adaptions of Raymond Chandler’s The Long Goodbye and The Big Sleep.

Inherent Vice has thus far, perhaps predictably, been described as “aggressively weird”, “organic”, a “deliriously masterful sunlight noir” and one of the “best films of 2014”. It is also, say numerous commentators, a meandering soporific endurance test that causes – no, forces! – audience members across the globe to up and leave the cinema. They just, you know, man, weren’t feeling it. That’s cool with Doc, probably. Audiences can leave if they want, he’d think to himself, that’s groovy.

What is it about this paranoid stoner comedy come cultural critique – giving us a glimpse of forgetful and often directionless PI work coming good in a world full of organized power – that’s so divisive? These days, surrounded by never-ending national and institutional economic and social crises, you might think us viewers would empathise with the dude who goes up against, or more accurately meanders around, The Man. Then again, there’s something about order that we cling to. And ordered is exactly what Inherent Vice is not. Its hazy narrative style (replete with foggy alleyways and lots of smoke from joints) doesn’t present what we’ve come to understand as “plot”. There’s no classic beginning, middle and end. The characters already have established relationships – we’re introduced only in passing, if at all. That said, as the film progresses, we get a lot more on Detective Christian “Bigfoot” Bjornsen (Josh Brolin), who acts – mimicking classic noir tropes – as Doc’s police foil. He helps and hinders Doc throughout, and his aggressive style provides a strong counterpoint to Doc’s passivity. He is named after his preferred method of entry, which sees him kicking Doc’s door down for a friendly visit, and talks proudly of his “civil rights violations”. Inherent Vice refuses to cast him as a stereotypical arrogant cop, though. He’s not part of the real power-structure (he does not get on with the feds) and does actually do real, good police work. In the novel, he’s described as “one of America’s true badasses” (202) and Anderson clearly seeks to emulate that. Pynchon mentions, and praises, the “Badass” in one of his few essays: “when times are hard, and we feel at the mercy of forces many times more powerful, don’t we, in seeking some equalizer, turn, if only in imagination, in wish, to the Badass… who will resist what otherwise would overwhelm us?” Ultimately breaking noir convention, Inherent Vice does turn, if only in part, to the Badass detective. Bigfoot’s diligent respect for his deceased police partner’s memory, which further distances him from any thug-cop stereotype, leads him to have a very personal stake in Doc’s case and he ends up working more or less alongside the stoned PI. 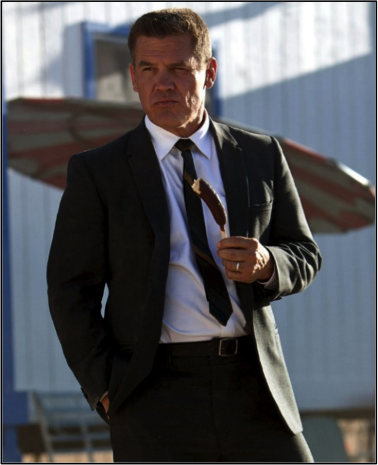 The film is extraordinarily faithful to the source material even though Anderson cuts certain narrative strands to focus on the Wolfmann-Shasta-Golden Fang plot. What he keeps in, though, he often lifts directly from the book. A great deal of the dialogue is word-for-word. It’s a bit of a love letter to the novel, and there are likely points of confusion for those who haven’t read it. Generally, though, the adaption holds together in its own right – it’s entertaining, endearing and funny. It certainly brings the novel to life with some fantastic performances. Josh Brolin is particularly impressive: few people could pull off balancing the “renaissance detective” between seriously intimidating and utterly ridiculous. Joaquin Phoenix nails Doc’s stoner sensibilities and Katherine Waterston – for the short time she’s actually on screen – captures the dreamy ambiguity of Shasta Fay Hepworth.

The broad thematic thrust of the narrative is set out in the opening scene. Pynchon likes to do this in his fiction, and Anderson follows suit. As the film starts, the epigraph “Under the paving stones, the beach!” and the description of Shasta “looking just like she swore she’d never look” set us up for a narrative all about the construction of modern America and American identities. We are repeatedly shown capitalism at its worst: from light-hearted depictions of LA cops that harbour show-business yearnings (Bigfoot takes character parts on terribly titled films, and dresses up as a hippie – with a giant faux-afro, love beads and shades with peace symbols on – for a real estate advertisement), to darker demonstrations of “development” that necessitate the destruction of entire neighbourhoods (Tariq Khalil explains to Doc that he tried to go back to his old gang turf, only to find the neighbourhood had completely disappeared save for a sign, Coming Soon on This Site). This all comes to a head in the character of “the Jew that wants to be a Nazi”, Mickey Wolfmann: an immensely affluent (billions stashed away) successful real-estate businessman with mafia connections and a bad temper. Despite his importance to the film’s plot, we only actually get to meet him once. He isn’t what we were led to expect. Then all of these themes that seemed to come to a head are once again diffused into the shadowy “golden fang” (maybe boat, maybe heroin cartel, maybe dentist association). The film never gives us any satisfactory conclusion on the power dynamics – we don’t even find out who – for sure – the golden fang might be. Only that they’re probably involved with at least the Aryan Brotherhood, the mafia and the FBI.

Pynchon, and Anderson, riff on the contradictory nature of these groups, which build on an abstract legacy of villainy in U.S. imagination. The contradictions are rendered comical: the Brotherhood find themselves sharing “many of the same opinions about the U.S. government” as the Black Guerrilla Family. Yet the subtext is disturbing; for all their absurdity, these groups form into a very real entity that drives the narrative. They, whoever they are, get their way, too. Wolfmann’s repentance for the negativity his real estate business has caused, by providing free housing and giving away his money, is stopped before it even starts. He’s “reprogrammed” at the Chryskylodon Institute and, by the end of the film, is back to being a money-driven businessman. This diffusion of villainy is precisely the point, of course. Even in the “real world”, these huge, deterministic and powerful forces are all around us and we’re barely able to acknowledge their influence. It is difficult not to abide by the system we’re born in to, even if it sustains itself by – at best – dubious means. As Pynchon wrote over 30 years ago in Gravity’s Rainbow: “we do know what’s going on, and we let it go on” (713). 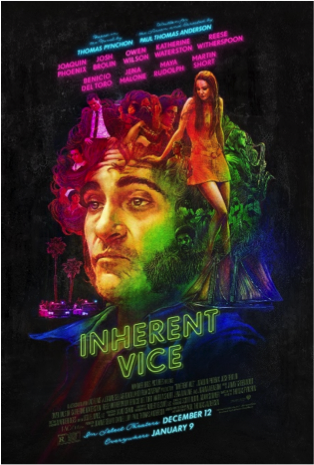 What the film does give us to combat this, though, is Doc. Against this backdrop of aggressive profiteering with a criminal undercurrent, his heartening laziness and disinterest in power politics is cast rather heroically. He pursues his cases, and his ex-girlfriend Shasta, with surprisingly dogged determination given the apathy of the stereotypical stoned hippie. But we might better describe him as slothful. Pynchon is interested in this deadly sin and often casts slothful leads in his novels; Anderson does a great job of capturing that. In Inherent Vice, it comes across most purely as a kind of resistance to the insistent and consistent time-is-money vibe of modern capitalism. Doc is perfectly willing not to take payment up front, and over the course of the film most of his deeds are good-willed. Particularly towards the film’s conclusion, where – offered almost anything – he chooses to help a family he hasn’t known for long. Really, Doc’s just a good guy but – like the ageing hippie movement he embodies – one that is on the way out of U.S. culture.

The film’s ending is quite a drastic change from the book, which is full of wistful uncertainty. Anderson opted for a happy moment, framing the story around Shasta and Doc’s relationship. For all of its chaotic drug-addled narrative style and difficult-to-follow plot, the adaption of Inherent Vice is really about reuniting: Doc and Shasta; Hope, Amethyst and Coy. It’s a tale that won’t be lost on most people, even for all its divergent moments. Perhaps we can simply put all the cinema walk-outs down to marketing. After all, a lot of people expected it to be like The Big Lebowski. Thankfully, it tries to be much more.

Sam is a PhD candidate in the Department of American and Canadian Studies at the University of Nottingham. He researches the role of economics in contemporary North American literature, with a particular focus on Thomas Pynchon, Margaret Atwood, Thomas King and the language poetry movement.
View all posts by Sam Cooper →
Tagged  C21, Contemporary Fiction, Politics, Popular Culture.
Bookmark the permalink.