In June 2013, the National Father’s Day Council presented their annual Father of the Year award to former US President Bill Clinton. The award was received in recognition of Clinton’s philanthropic work, undertaken in the years following his presidency. In support of the accolade, the NFDC further cited his successful balancing of fatherhood with the demands of public office.

Public reaction, perhaps inevitably, was derisive in some quarters. Responses to online reports most often recalled the spectre of the Lewinsky scandal, and, for many, Clinton’s reputed sexual indiscretions did not square with this new assessment of him as ‘Father of the Year’. On his leaving office, Gallup conducted a poll asking whether Clinton was more likely to be remembered for his accomplishments or his involvement in scandal, with 68% suggesting the latter. Though increasingly remembered as an ‘above average’ president, in the popular imagination Clinton has found it difficult to escape the memory of the scandal that dominated his second term, and his apparent failure as a father: both on a personal level, and in relation to the electorate.

It is interesting, then, to consider how Clinton’s public persona has persistently been constructed around fatherhood, before, during, and after his presidency. Clinton’s time in office coincided with another cycle of the masculine crisis, during which there was a concerted shift towards domestic fatherhood as a solution to the question of what it meant to ‘be a man’ in the approach to the new millennium. There are shades of this, too, in Clinton’s own public image.

This is not to ignore the emphasis on youth that characterised Clinton’s entrance on the national stage. At 46, he was the second youngest elected president to hold office, and the 1992 campaign featured a range of political advertisements emphasising his place within a “new generation of Democrats”. The image of a young Clinton shaking the hand of JFK cast him as the son of a more hopeful time and, against George H. W. Bush, Clinton emerged as the personification of a young, energetic politician.

Yet this was carefully tempered with reminders of Clinton’s political experience as Governor of Arkansas, and his role as father to his 12-year-old daughter. Chelsea was the first child to reside in the White House since Amy Lynn Carter in 1979, allowing for the conscious construction of Clinton as Dad, as well as President. At the Democratic National Convention in 1992, Chelsea was pictured holding her father’s hand, and she stood beside him as he took the Presidential Oath at his inauguration in 1993. More casual photographs of father and daughter surfaced on numerous occasions during the campaign, with Clinton cast in the role of ‘ordinary dad’, white-water rafting and playing mini-golf with his family. 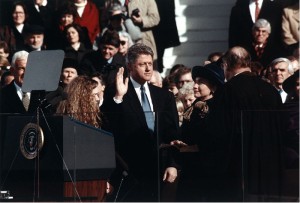 Clinton drew on the story of Chelsea’s birth in his 1992 campaign film, The Man from Hope, recounting his desire to see his daughter born, and his battle with hospital staff to be allowed into the delivery room. This moment becomes woven into the wider myth of Clinton’s own fatherless childhood, as he comments on camera: “I still remember how profoundly grateful I was… that I had lived to see it. I mean, I was very aware at that moment that that’s something my father hadn’t done.” Clinton effectively rehabilitates the fatherless son through his own fatherhood, beginning a trend that would continue throughout his presidency and beyond.

Clinton’s construction as ‘father of Chelsea’ persisted throughout his first term. The president’s forceful request that the media leave his daughter alone framed him as a parent whose primary concern – even whilst leading the country – was the welfare of his child. During this period, one story in particular caught the attention of news outlets: Chelsea, taken ill at school, asked the nurse to call her father, as her mother was likely too busy. Though perhaps more helpfully read as a broadside at Hillary Rodham Clinton and her role within the White House, the story does illuminate a persistent image of Clinton as a reliable, involved dad.

It is the potential for rehabilitation embedded in these images of fatherhood, however, that is particularly striking in the case of Clinton. ‘Father of Chelsea’ was one thing, but Clinton had an arguably bigger task on his hands: to convince the electorate that he could function as father of the nation. Hitting his lowest approval ratings in 1993, after Waco, the Democrats lost the House and Senate in 1994. Clinton’s campaign adviser, Dick Morris, has spoken candidly about his advice to the president in the build-up to the 1996 elections, urging Clinton to rethink his image and harness fatherhood once again, this time in a more symbolic sense.

Robin Lakoff has discussed the desire of the American electorate to see the president as a father figure, suggesting that “underneath, we want a daddy, a king, a god, a hero”, and Morris drew on this desire in his campaign strategy. He traces the necessary evolution of Clinton from “son” (of Arkansas), to “buddy” (the down-to-earth president who was not above a beer and a cook-out), to “father”, structuring the campaign around an image of “building a bridge” to the future. Clinton was reconstructed as a leader taking his people into the 21st century, a symbolic father shepherding the nation into the new millennium and beyond. His campaign rhetoric reflected this paternal feeling. In advertisements, he stated that his job as president was to “take care of the American people”, and in the 1996 campaign film, Between Hope and History, Clinton aligns himself with Abraham Lincoln, a departure from his preferred image of comparison, JFK, trading idealised youth for fatherly wisdom.

Clinton’s position as national father was, perhaps irretrievably, rocked by the Lewinsky scandal and the ensuing impeachment proceedings. Yet as the revelations surfaced, the redemptive potential of fatherhood once again became clear. The now-famous photograph of Chelsea holding both her parents’ hands as they cross the White House Lawn in 1998 is credited with presenting a united image of the family during a particularly difficult moment on the public stage. It is telling that, once more, it is Clinton’s status as father that has the power to rehabilitate him, and it was during this period that he garnered his highest approval ratings of his entire presidency.

Clinton has often been described as a president of contradictions, an image only heightened by his position as a leader bridging the gap between the 20th and 21st centuries. Wrapped up within his public image is one particular contradiction: Clinton as son, or child, versus Clinton as father. Certainly, his construction as father is not without ambiguity. Yet the persistent return to the paternal image illustrates its potency for Clinton as a tool for survival and for rehabilitation, both in personal and political terms. In accepting his Father of the Year award, Clinton recalls telling his daughter “as long as you’re in this house, being President is my second most important job.” In an era when fatherhood was increasingly advocated as a source of meaning for many American men, the President himself was keenly aware of the power of the paternal.

Katie Barnett is currently a lecturer in Media and Cultural Studies at the University of Worcester. She received her PhD from the University of Birmingham in 2013, and her current research examines paternal constructions of masculinity, focusing particularly on representations of fatherhood in 1990s Hollywood cinema.
View all posts by Katie Barnett →
Tagged  C20, Masculinity, Presidents.
Bookmark the permalink.