“Homage”: the deliberate but respectful recreation of one work within another. Think of Michael Cunningham’s The Hours, homage to Ms. Dalloway; the BBC’s Life on Mars and The Sweeney; the stairway shoot-out in The Untouchables and the Odessa Steps scene in Battleship Potemkin. They are all homage, yet all their own.

But contiguous with homage is plagiarism: disrespectful, deceitful, and what one expects prima facie of Noah Hawley’s Fargo. This recent miniseries tracks back to the Coen Brothers’ film of 1996. Its Minnesota setting is as the film’s, likewise its basic set-up: mild-mannered insurance salesman imbricates self in ghoulish criminal activity; said activity is investigated by paragon-of-virtue lady cop. Given all this, Fargo, prior to airing, stood out as a potential nadir of our contemporary remake culture.

In fact, it was masterful— especially in its balance of homage and originality. With that balance in mind, I discuss here two phenomena: first, the grace with which the show Fargo acts as homage to the film; second, how the show expands, explores, and adds to its source material. 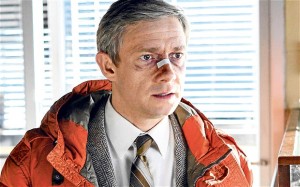 Let us begin in the abstract, with how Hawley respects yet revises the film’s infamous Grand Guignol. The film is consistently concerned with violence, with either its realization in one instance (kidnap, high way, car-park, wood-chipper…) or the build-up thereunto. Bullets beat a steady pulse. The show deals much more with what happens after violence, at least vis-à-vis its antihero Lester Nygaard: most of his storyline concerns his hiding his culpability for the multiple murders committed in the pilot. And although the series features various acts of violence, each has space either side of it in which to reverberate and/or be anticipated. Such space cannot be spared within the film’s tidy ninety minutes. The result is a Fargo (Hawley’s) much more about menace than mayhem— or, to invoke an apposite Gothic coordinate, more about terror than horror.

No less artful is Hawley’s more precise line in homage. Consider his featured hit-men. Where the film’s hit-men were hired by the film’s put-upon Lundegaard, Hawley’s hit-men are turned back upon Nygaard as the hires of an outside party (a crime syndicate). In the one Fargo, they afford us Ortenesque comic relief; in the other, Pinteresque comedy of menace— which comedy is secondary, in any case, to a very real antagonism. Additionally, despite retaining the original hit-man archetypes (uptight fink, silent giant), Hawley makes the latter deaf, and features frequent extended bits of BSL. Diversity on screen as an intrinsic good, sure; but also, given the a-typicality of BSL on our screens, an effective way to alienate this world and its denizens from us the viewer.

Consider too the briefcase. In the original Fargo, the briefcase containing the Very Important Ransom is left buried, irretrievable for its suitors, in the highway snow. It is a Macguffin; its burial, the tragicomic punchline of the film. In the show, set twenty years after the original (in 2006), the briefcase is rediscovered, brought back into play. By fashioning this, Hawley does himself two favours. He establishes the show as distinctly not a remake of the original film (the events of which must have happened already to allow “rediscovery”) and introduces a thematically rich idea of cyclical history— of ‘history repeating itself, first as tragedy, second as farce’. And with pleasing fidelity to the spirit of the thing, Hawley’s briefcase remains a McGuffin: the tragedy of Stavros (its discoverer) is functionally irrelevant to the Nygaard–rooted primary narrative. 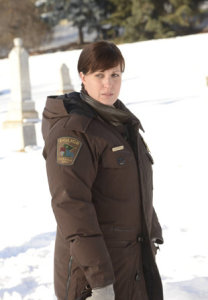 Consider, finally, Detective Molly Solverson (the lovely Allison Tolman). Solverson is mutatis mutandis the film’s Marge Gunderson: a breakout Frances McDormand, the heavily pregnant police chief of our time. Both women are ordinary, easily underrated, and intrinsically decent, and the superior of their fellow— and male— dramatis personae. The feminist import evinces itself: of greater immediate relevance is how gracefully Hawley filters even the iconic Gunderson signifiers through Solverson.

So yes, Solverson does become heavily pregnant— but only after a twelve-month time jump. And yes, she quotes verbatim the final McDormand speech (‘There’s more to life than little money, you know’); but she does so unexpectedly early (in episode 7 of 10) and stops short of its final, most immediately recognizable line (‘And it’s a beautiful day’). In both cases, Hawley eschews the overt. From myself and other Coenistas, at least, such referential subtlety elicits an approving nod.

There is another aspect of the Solverson differential that merits notice (and moves us from “homage” to “originality”). As Gunderson before her, Solverson is professionally underrated (N.B. the superb character acting of Bob Odenkirk as the Sheriff); but Hawley simultaneously invests her with professional authority via his creation of the ingenuous Officer Gus Grimly. Against Grimly’s gawk and stutter, Solverson appears all the savvier, the abler. For Hawley to so enfranchise Solverson is a boon for the show: in other, lesser hands, ten hours’ non-counterbalanced emphasis upon white male iniquity (vs. a tidy ninety minutes) could have rendered a Fargo series a reductive Boy’s Own.

Invoking Grimly directs us towards the original aspects of Hawley’s Fargo, towards its various advancements of its source material. Demands of space compel me to identify only three.

First, Hawley’s world-building. Where the film stuck to the town of Brainerd with a brief jaunt into Minneapolis, the show not only lingers in both the featured towns Bemidji and Duluth, but also encompasses Fargo City proper, Las Vegas, and the stark desert of Reno, Nevada (an especially startling dislocation: it presents like an inverse Minnesota).

Second, the series’ standout sequence: a snow-storm shot-out involving Solverson and Grimly, the henchmen, and the series’ Big Bad Lorne Malvo. Here, Hawley exploits the meteorological caprice of Minnesota (i.e. for extended dramatic tension) more fully than his forebears. Not only this, Hawley, with this storm, realizes aesthetic possibilities of the Fargo milieu that go wholly unrealized in the film. I think here of his switching from white- to blue-based colour palette— estranging, de-familiarizing beyond any aspect of the film; I think also of how snow alone— in underfoot, blizzard, and frozen forms—creates here as heterogeneous a backdrop as any of either Fargo’s townscapes. 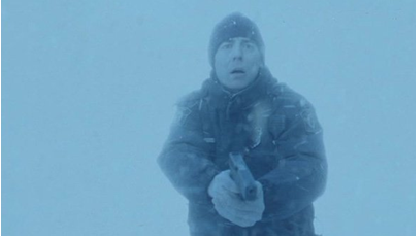 Our third example: the aforementioned Lorne Malvo. Hawley’s principal antagonist represents two original additions to the Fargo-verse. First, he is the image of evil as non—laughing matter that is absent from the film, its Buscemi—Stormare line-up. Second— and uniquely in the series, never mind compared to the film— Malvo operates at an allegorical level. Notwithstanding the very real deaths he initiates, Malvo is less person than personification: a prankster god, framed, in one superb shot, in an elevator door with blood-spatter “wings” on the wall behind him; a preternatural, predatory Iago, stirring the pot of others’ (especially Nygaard’s) latent evil. No precedent exists in the film’s gamut of characters.

But nota bene: not merely Malvo, but the whole series operates at an allegorical level. Some standout evidence: non-diagetic recitation of Gregorian chant and the Book of Exodus; fishes raining from the sky upon Stavros of the stolen briefcase, which event causes the death (or “theft”…) of his son; and a non sequitur, ten-minute parable about the limits of philanthropy (in episode 5— itself named for a koan, ‘The Six Ungraspables’). An original departure from the Fargo film, this allegorical streak certainly is; but it also works as homage, to the Coens’ oeuvre in sum: to A Serious Man, the brothers’ “Jewish movie”, indebted to the parable tradition (especially the story of Job); to No Country for Old Men, whose resident coin-flipping nihilist Anton Chigurh is Malvo by another name. Here really is why I champion Hawley’s Fargo, and why it deserves championing: it is the ideal Coenesque; it is neither knock-off Coen Bros. nor guided by their one work Fargo alone.

Hawley himself, I should say in addendum, has gone on record about the Serious Man/Old Men influence on Fargo season 1. He name-checks Miller’s Crossing and The Man Who Wasn’t There as touchstones for season 2 of Fargo: a recipe, I assure you, with which few show-runners— let alone Hawley— could fail.

Book Review: The Captive’s Quest for Freedom: Fugitive Slaves, the 1850 Fugitive Slave Law, and the ...
“Money, That’s What I Want”: Who Benefitted from the Crossover of African American Musicians in the ...
“They Need Us and They Want Us”—Erecting the Empire in the Vietnam War
Review: HELAAS Young Scholar Symposium - ‘Conflict and Negotiation in American Culture(s)’ (Online)
Night: Another Frontier in American Wilderness Studies?
Hannah Murray: My Reflections on winning the 2016 USSO Keynote Competition
Video Games and American Studies: Reverberations of Trumpism in Far Cry 5
Review: IBAAS Joint Conference