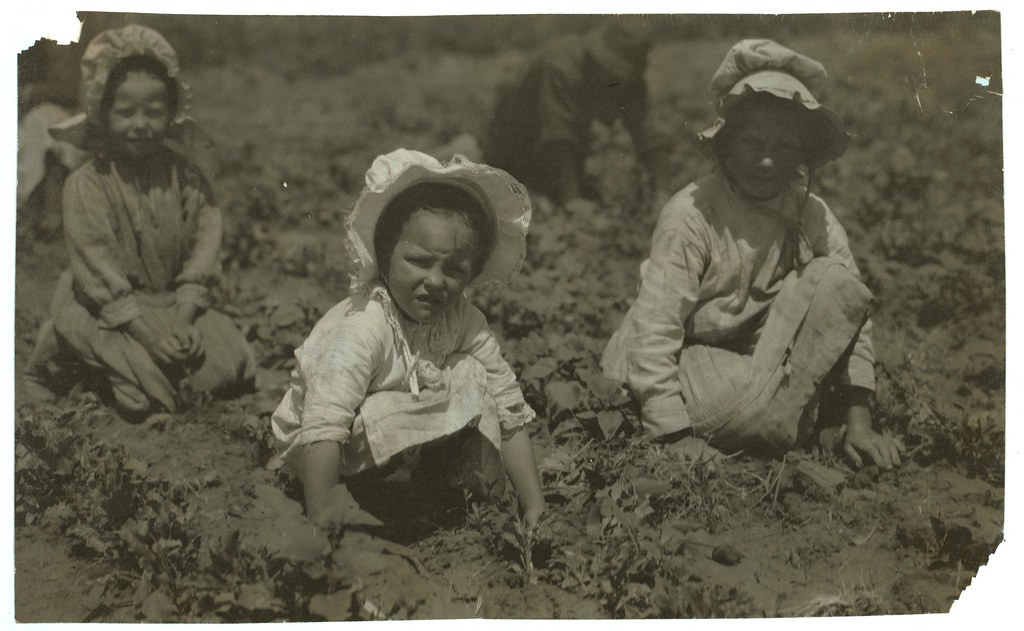 “LC-DIG-nclc-00268 Beets” by Children’s Bureau Centennial is licensed under CC BY 2.0

The day before President Joseph R. Biden’s inauguration, the National Children’s campaign held a virtual children’s inauguration. Speakers included politicians, such as Massachusetts senator Ed Markey (D), and young activists themselves, several of whom called for the creation of a ‘White House office for kids’, arguing that the political establishment fails to consider and protect the rights of young Americans. This article briefly details three areas where children are not protected from harm: medical neglect law, child marriage, and child labour in agriculture. Based on the standards the US federal government applies to other countries, its failure to ratify international agreements on children’s rights, and aspects of the US Constitution, the United States must be considered a failing state when it comes to children’s rights.

With the ongoing Covid-19 pandemic and vaccination response, parental rights to refuse vaccinations for children has once again been in the news. When older teens disagree with their parents they must wait until they are legal adults in most states before they can advocate for themselves and receive potentially life-saving vaccinations. Back in 2019, eighteen-year-old Ohio resident Ethan Lindenberger told Congress of his previous difficulties seeking vaccinations for illnesses like whooping cough. Lindenberger was not just worried about his health but also potentially passing illnesses on to his more vulnerable siblings.

The restrictions of children’s medical rights are not limited to preventative care, such as vaccinations. Guardians have the right to refuse medical treatment, often on the basis of religion, even in life-threatening situations. In some states a legal paradox exists. For example, California law affirms a parent’s right to refuse treatment on spiritual grounds yet simultaneously criminalises them if their child dies as a result. Whilst no longer true for federal laws, many state child-neglect laws still include religious exemptions.[i] The justification for this is respecting parental rights of religious liberty, however, this completely overlooks children’s Fourteenth Amendment rights to equal legal protections.[ii] Currently some children do not have the same legal protection from neglect as their peers based solely on the spiritual convictions of their guardians. This is no moot legal point. Between 1975 and 1995, 172 children died in the United States from cases of religious-based, medical neglect. In scenarios where a child and their guardian’s legal rights may conflict, it is the adult that is routinely favoured, even in cases where spiritual convictions are pitched against matters of immediate physical safety.

A desire to uphold religious liberty is undoubtedly significant in the decision-making of legislators and the judiciary but these decisions also clearly privilege parental control over children’s voices. The United States is the only member state yet to ratify the United Nations Convention on the Rights of the Child (1989), a key objection being that its emphasis on children’s right to have a say on matters that materially affect their lives would diminish the current rights of guardians in US law. Historically, the denial of full Constitutional rights for children has been justified by arguments that they lack ‘autonomous choice’.[iii] This itself is a troubling double standard—adults do not have to prove such capacity to have their rights recognised. But as cases of medical neglect show, even where older children are clearly capable of making an informed choice about their own health, lawmakers and judges remain reluctant to afford them equal legal protection from neglect as their peers. It is little wonder that both medical professionals and children’s rights advocates argue the United States is ‘too lenient on faith-healer parents.’

Another area of law that favours adults over child victims, and where the United States struggles to meet international standards, is marriage.[iv] The federal government is swift to condemn child marriage abroad considering it ‘child abuse’ and, like all ‘forced marriages’, a ‘human rights abuse.’ Marriage is left to state legislatures, however, and despite the U.S. opposing child marriage abroad, it remains prevalent on home soil. National figures are not kept, as some of the fifteen states that have no age limits on marriage, including California, do not keep statistics. It is estimated, however, that a quarter of a million minors were married in the U.S. over the past fifteen years. Extreme cases include an eleven-year-old boy from Tennessee being married to a woman in her thirties and a ten-year-old girl in Alabama being married to a 74-year-old man.

Despite the obvious concern such marriages generate, efforts to change the law have been met with opposition from Republicans, Democrats, and even the Civil Liberties Union. In 2019, Louisiana lawmakers rejected efforts to impose a firm age limit in the state, citing a desire to ‘ensure children were born in wedlock.’ Even when states do legislate, some set the age for marriage below the age they set for consent and, it should be noted, child marriage is legal at least in some circumstances in every state. In some cases, judges are able to permit minors to marry adults in cases of pregnancy, which both children’s rights advocates and former child brides argue is the state sanctioning of statutory rape.

Child labour laws are another instance where the U.S. would fail to meet the standards, if ratified, of the Convention on the Rights of the Child.[v] Agriculture is exempt from federal child labour legislation, as it has been since the passage of the 1938 Fair Labor Standards Act, itself a compromise after decades of argument, Supreme Court cases, and stalled Constitutional amendments. The idea of not criminalising children for helping out on the family farm remains powerful. Similarly, few people want to criminalise young people performing on Broadway, playing professional sport, delivering newspapers, or taking jobs at their childhood summer camps. But where loopholes exist, exploitation occurs, and this agricultural exemption continues to be deliberately exploited by large-scale commercial growers.

Consumers are often encouraged to buy American on economic, patriotic, and environmental grounds. But how ethical is it when a quarter of American-grown food is picked by a child? The National Consumers League estimates that 400,000 minors, who are disproportionately likely to be of colour or the children of immigrants, work in agriculture each year, often working sun-up to sun-down picking food but also cash crops such as tobacco. Agriculture contributes 17% of North Carolina’s economy, with the largest single crop being tobacco. In 2014, Human Rights Watch interviewed 141 child tobacco-pickers and found that three quarters were suffering from nicotine exposure and other work-related health problems, including nausea, loss of appetite, skin irritation, eye complaints, and difficulty breathing.

Whilst the federal law permits children as young as twelve to be deployed in the fields full-time and as young as ten part-time, the Environmental Protection Agency fails to account for their presence when regulating the usage of potentially harmful pesticides or chemicals, representing an obvious health hazard to smaller, growing bodies. Specific safety training for young workers is not mandated. A girl who started picking tobacco at thirteen said, “None of my bosses or contractors or crew leaders have ever told us anything about pesticides and how we can protect ourselves from them.” A fourteen-year-old described his training: “When you’re chopping with the machete, they say, ‘Oh, be careful, like, to not hurt yourself,’ but that’s basically it.” Research in the American Journal of Industrial Medicine confirms the dangers of what federal law allows, with an average of 33 child agricultural workers injured on the job every day, and identifying 237 deaths between 2003 and 2016. Legislation continues to serve the interest of exploitative commercial growers and fails to protect children in the fields.

Young participants in 2021’s National Children’s inauguration clearly communicated that they did not feel as though much of the political establishment took their viewpoints or their rights seriously enough. They called for the creation of a new White House office for children. This article has highlighted three pressing issues—children’s medical rights, child marriage, and child labour—where oversight is desperately needed. Currently, based on the standards the US federal government judges other countries by, aspects of the U.S. Constitution, and a failure to ratify the U.N. Convention on the Rights of the Child, the United States must be considered a failing state when it comes to children’s rights.

[i] For instance, the Illinois Compiled Statutes that define a ‘neglected child’ exclude a child whose ‘parent or other person responsible for his or her welfare depends upon spiritual means through prayer alone for the treatment or cure of disease or medical care.’ 325 ILCS 513 (2006). The history of child medical neglect laws and various religious groups is a lengthy, complex one. For an in-depth analysis of this history and a lengthier discussion of public policy and legal issues see: Lynne Curry, Religion, Law, and the Medical Neglect of Children in the United States, 1870-2000’, (Cham, Palgrave Macmillan, 2019).

[ii] Section 1 of the Fourteenth Amendment states: ‘No State shall make or enforce any law which shall abridge the privileges or immunities of citizens of the United States; nor shall any State deprive any person of life, liberty, or property, without due process of law; nor deny to any person within its jurisdiction the equal protection of the laws.’ The argument that child neglect laws which feature religious exemptions deny children equal protection in law is a strong one. It must also be noted that in the case of In re Gault (1967) the U.S. Supreme Court ruled that Fourteenth Amendment protections should apply to juveniles as well as adults. In Powell v. Alabama (1932), the Supreme Court Case stemming from the infamous Scottsboro case, the Court ruled that states must inform illiterate defendants of their right to an attorney. That case is notable in this context because the defendants were aged between 12 and 19, and the court considered their Sixth and Fourteenth Amendment rights in reaching its judgement.

[iii] Anne Dailey, ‘Children’s Constitutional Rights’, University of Connecticut Faculty Articles and Papers (2011) 355: pp.2099-2135; Soo Jee Lee, ‘A Child’s Voice vs. A Parent’s Control: Resolving Tension Between the Convention of the Rights of the Child and U.S. Law’, Columbia Law Review, 117:3 (2017), pp.687-727. State laws which include religious exemption clauses to neglect laws are incompatible with Article 3, 6, 12, 19 and 24 of the United Nations Convention on the Rights of the Child.

[iv] Numerous bodies, including UNICEF, interpret child marriage as is allowed in the United States, as violating numerous international agreements including the Convention on the Rights of the Child. UNICEF, Child Marriage and the Law, (UNICEF Legislative Reform Initiative Paper Series, 2007).

[v] Article 32 of the United Nations Convention on the Rights of the Child is the ‘right of the child to be protected from economic exploitation and from performing any work that is likely to be hazardous or to interfere with the child’s education, or to be harmful to the child’s health or physical, mental, spiritual, moral or social development.’

Jack Hodgson completed his PhD at the University of Northumbria in October 2021. He is a historian of children and childhood in the United States in the late 19th and early 20th century. His work pays particular attention to child citizenship, children’s constitutional rights, and children’s political participation. You can find him on Twitter: https://twitter.com/hodgepodge96
View all posts by Jack Hodgson →
Tagged  America Now, Civil Rights, Politics.
Bookmark the permalink.