By Louise Hardwick September 19, 2015 September 18, 2015 Eccles Centre Summer Scholars, History, Literature, Research, Special Featured Blog Series
[This year the British Library Americas Blog and U.S. Studies Online are publishing a series of posts as part of the Eccles Centre’s Summer Scholars 2015 series. The articles are based on talks given by a range of writers and scholars conducting research at the British Library thanks to generous research fellowships and grants awarded by the Eccles Centre. Several of these have a scientific flavour, and in this post Louise Hardwick from the University of Birmingham discusses some of the groundbreaking discoveries her research on the author Joseph Zobel have unearthed, taken from her talk which took place on 17th July.] 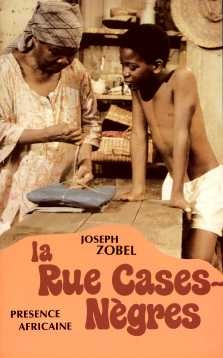 Researching the life and works of the French Caribbean author Joseph Zobel has taken me all over the world and – as a direct result of my collaboration with the Eccles Centre at the British Library – led to what the Guardian called my “Indiana Jones Moment” (but more on that later…).

As part of my current research Fellowship which is funded by the AHRC (Arts & Humanities Research Council), I’m preparing a book on Zobel’s literature, with the aim of changing how his contribution to world literature and culture is understood by academics and public audiences alike.

Zobel was born on the island of Martinique on 26 April 1915, making this year the centenary of his birth. To this day, he remains best-known for his semi-autobiographical novel La Rue Cases-Nègres which was published in 1950, and which was translated into English in 1980 with the title Black Shack Alley. In 1983, La Rue Cases-Nègres was adapted into the film Rue Cases-Nègres (English release: Sugar Cane Alley) by the Martinican director Euzhan Palcy and was showered with international awards. Zobel’s work makes an important contribution to the scholarly and public understanding of Négritude, colonialism and post-slavery Martinique.

Whether in French (La Rue Cases-Nègres) or in English (Black Shack Alley) Zobel is taught widely across the world, and earlier this month I was delighted to meet a Japanese colleague and anthropologist who told me she uses the film Rue Cases-Nègres with her students in Japan for a course on Caribbean culture.

However, this text and its film adaptation have come to eclipse Zobel’s wider body of sophisticated and ideologically radical work. My research project aims to reappraise this neglected corpus, and to bring it to a wider audience. 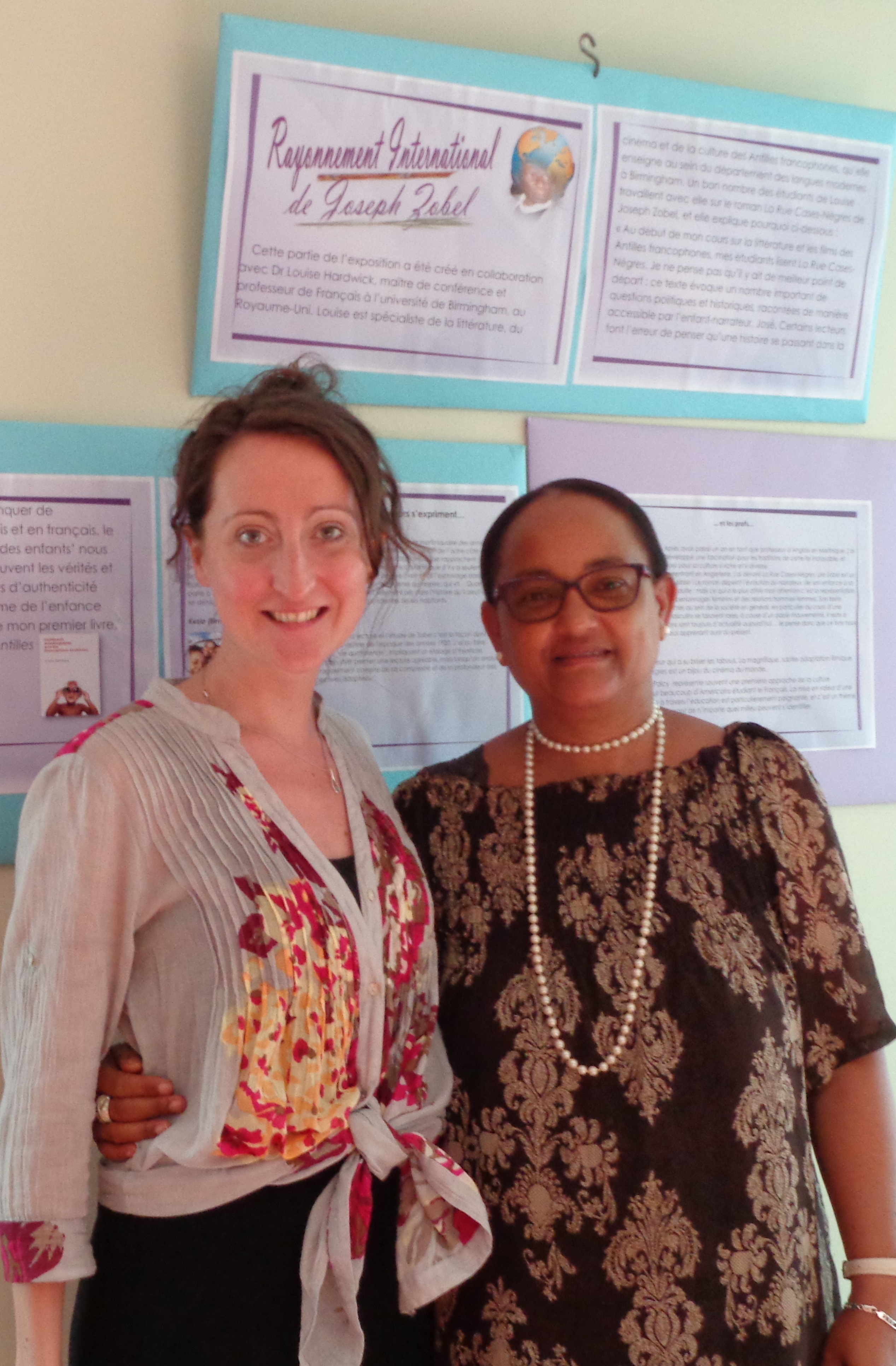 Louise with librarian Raphaëlle Bouville, in front of their co-produced exhibition panels in Rivière-Salée. Image courtesy of author

Over the past few months, I’ve found myself in Paris at the Paris Book Fair to speak at a Round Table on Zobel’s first novel, Diab’-là, which was re-released this year as a graphic novel by Roland Monpierre thanks to a crowdfunding initiative launched by the French Zobel appreciation group Passions partagées. I have also been working with project partners in Martinique, and was an invited speaker and guest at the centenary celebrations organized by the town of Rivière-Salée, helping the town plan an international dimension to their commemorations. I found myself being interviewed on the evening news for Martinican TV, and co-designed an exhibition on Zobel and his international influence at the Médiathèque in Rivière-Salée, a hi-tech public library.

Back in the UK, I’ve been working with colleagues in the Eccles Centre, discussing how the holdings in the collection might help my research. British-based Anglophone audiences might not necessarily be familiar with the island of Martinique, so I began by searching through the catalogue. A quick search of the online catalogue revealed a series of early nineteenth century watercolours of the island, which I hadn’t expected to find in the UK. However, it’s less surprising that they’re there when we remember that this is the period when the English had occupied Martinique. It seems quite likely that the artist, who was named Alexandre Moreau de Jonnes, was providing images for wealthy clients of the lucrative slave plantations that stretch across the fertile plane of Rivière-Salée. The set of watercolours serve as a reminder of the slave trade’s transatlantic web of economic and human exploitation, and the links between the UK, France and the Caribbean at this particular moment in history.

One image in particular caught my attention: 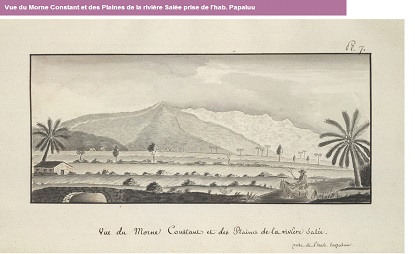 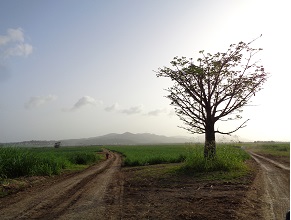 When I was in Martinique for the events surrounding the centenary in April, I was lucky enough to be given a guided tour of Rivière-Salée and areas of particular importance to Zobel by Raphaëlle Bouville and Louri Ludovic. Louri is the author of Habitation Trenelle (2010), where he began his career working as an apprentice carpenter. By the 1970s, he was working on the same plantation where Zobel had grown up some fifty years earlier: a place called the Habitation Lapalun.

I headed down to London to examine the actual documents, and that’s when I was certain: the place labeled as ‘Papaluu’ was none other than ‘Lapalun’, the very same plantation where Zobel was born!

The big ‘reveal’ was made at my Summer Scholars talk in July 2015, and I put out some teasers on Twitter and on my project blog about the mystery image with a secret connection with Zobel, which generated a real buzz online about the project. Before I knew it, the Guardian Higher Education Network online had been in touch and commissioned an article on the find.

I was delighted to find this unexpected connection to Joseph Zobel in the British Library holdings. I’m currently in the process of helping my colleagues there to correct the records, and am hoping to add a permanent message which will note that the real name ‘Lapalun’ was discovered thanks to my collaborative AHRC research project with the British Library. 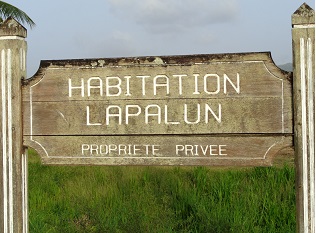 Creating Model Americans: The Mississippi Choctaw Billie Family and Relocation
Re-Imagining the Blues: A Transatlantic Approach to African-American Culture
"An exceptional opportunity": Rachael Alexander on the role of BAAS Postgraduate Representative
Youth Politics and Dispelling the Image of The Terrible Turk with Selma Ekrem’s Autobiography, Unvei...
Katherine Anne Porter: The Travel and Fiction of a “Roving Spirit”
“The Land Entire Saturated”: Commemorating the Civil War Dead at 150 years
Just one day to go: primaries are nearly over
God and the Revolution: Christianity, the South, and the Communist Party of the USA

Louise Hardwick is a Senior Lecturer at the University of Birmingham (UK) and AHRC Early Career Leadership Fellow. Her main research area is Francophone Postcolonial literature and culture, with particular interests in biopolitics and ecocriticism. Louise's research to date has been supported through major funding awards including an AHRC Early Career Leadership Fellowship (2014-2016) for research on Joseph Zobel, which has a live project blog: http://josephzobel.wordpress.com/.
View all posts by Louise Hardwick →
Tagged  C20.
Bookmark the permalink.