The biennial Maple Leaf and Eagle Conference is an event of legendary status both in Helsinki and far outside Finland. For almost four decades, it has kept the tradition of the longest running conference at the University of Helsinki uninterrupted and has provided a dynamic venue of exploring and explaining the phenomenon that is North America. Despite the challenges and troubles of recent times, the event successfully took place in May 2022. For the first time in its history, the conference was organized in a hybrid form, both face-to-face and online. However, that was not the only thing exceptional about this year’s conference. It was set against a turbulent background of an unprecedented ongoing war and a refugee crisis in the middle of Europe, and Finland’s and Sweden’s historical decision to abandon their long-lasting policy of non-alignment in favor of applying for a NATO membership. These events are sure to change the global landscape in so many ways in both the short and long-term.

During a three day-long conference almost 100 speakers from all over the world, including senior and junior scholars as well as many enthusiastic undergraduate and postgraduate students, had the chance to meet and discuss a variety of physical, mental, and social landscapes of Finland and North America. At thirty sessions and panels they approached diverse landscape-related topics from a plethora of viewpoints. The conference was opened with the keynote speech “Race and Immigration in the Construction of U.S. Democracy” by Professor Madeline Hsu (UT Austin). In this enlightening presentation, Hsu explored two ever-important topics of immigration and race in connection with the evolving sociopolitical landscape of the United States. The panels “Race, Environment, and Empire” and “Landscapes and Agency” also approached race, immigration, and landscape in such contexts as ethnic literatures, political and social movements, and war. In the former panel, Inna Sukhenko (University of Helsinki) also skillfully drew attention to ecocritical dimensions of landscape in nuclear narratives.

The second day of the conference began with the notable panel “Cultures on the move”. Ray Allen’s (City University of New York) presentation “Transnational Connections: Harlem Calypso and Brooklyn Soca” and Paul Spickard’s (UC Santa Barbara) “The Bronze Buckaroo and the Chinese Nightingale: Herb Jeffries, Shirley Yamaguchi, and Shape Shifting Racial Identities” revealed many surprising African American, Afro-Caribbean, and Asian connections and contributions in U.S. music and cinema. Balázs Venkovits (University of Debrecen) in turn shed light on the rarely studied topic of Hungarians in European immigration to North America in the early 20th century. The following panel “Finnish American Connections” successfully addressed another overlooked topic such as varied aspects of connections between Finland and the United States. The presentations by Henry Oinas-Kukkonen (University of Oulu) and Paul Landsberg (University of Kansas) as well as my own speech were united by the same overarching topic of Finnish men’s interactions with Nordic and North American landscapes and environment. The presenters focused on ideological, literary, and military dimensions of these interactions. 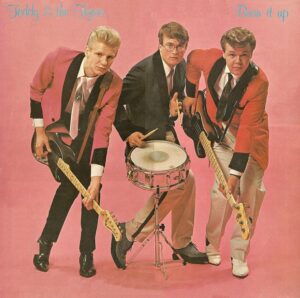 In the panel “Arts and Culture”, cultural developments and influences in various types of landscapes in Finland and North America were put in the limelight. Nathan Gibson (University of Madison-Wisconsin) in his fascinating presentation “Finn-A-Billy Music: Performing America and Rebelling in Finland” concentrated on the lasting effects of U.S. popular culture on Finns and particularly emphasized the roles of American roots music. Professor Michel S. Beaulieu (Lakehead University) and Jenna L. Kirker (McMaster University) along with Jamie Jelinski (Dalhousie University) thoroughly investigated transformations in Canadian urban landscape, be it the entire city of Thunder Bay or a single block in Vancouver with penny arcades, shows, and other entertainment establishments.

The second day ended with the keynote speech “Curse of the Viking? North American White Nationalism and Viking-Age Imagery” by Associate Professor L. K. Bertram (University of Toronto). In her profound presentation, Bertram brought to the fore the pervasiveness of an image of the Viking in the history of the United States. From legendary Leif Erikson to the notorious QAnon Shaman in the 2021 United States Capitol attack, Bertram illustrated the worrying connections between that imagery and U.S. racism, settler colonialism, and right-wing populism throughout the centuries. 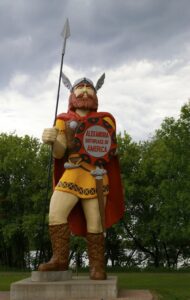 On the final day of the conference, in the panel “Re-Imagining Border Landscapes” Rani-Henrik Andersson (University of Helsinki), Nick Baxter-Moore (Brock University), Munroe Eagles (University at Buffalo), and Robert Nelson (University of Windsor) remarkably discussed landscapes in Indigenous and Canadian/American borderlands. Their diverse topics of analysis ranged from political values and attitudes to national parks and foodways. The following session “Environment in Fiction” addressed the representations of environment in U.S. science fiction and dealt with equally varied and interesting topics including anthropogenic apocalypse, energy, viruses, and many utopian and dystopian visions. In the panel “Human Migration and Network Analysis” close to the end of the conference, Francis Flavin (Indiana University), Saara Kekki (University of Helsinki), and Justin Gage (University of Helsinki) presented a number of new eye-opening directions and instruments in North American and Indigenous studies. Finally, the conference was ended with the thought-provoking keynote speech “A Deep History of Mixing Blood: Indigenous Strategies and Race Science in North America” by Professor Anne Hyde (University of Oklahoma) who raised the question of blood in U.S. and Canadian history. Hyde addressed marriages, alliances, and other forms of human bridges in North America and put a particular emphasis on the Indigenous experiences. It was a noteworthy ending of the conference which summarized many of the presentations and discussions we had heard earlier.

As President of the Organizing Committee Professor Mikko Saikku said in his concluding speech, yet again the Maple Leaf and Eagle Conference proved successful in bringing together cutting-edge scholarship in the field of North American studies. This academic event remains as strong as ever. While this year’s new hybrid model posed more challenges than ever before, the famously smooth-going conference still lived up to its reputation. For this, thanks are due to the conference organizers: Conference Director Saara Kekki, Professor Mikko Saikku, University Lecturer Rani-Henrik Andersson, and so many more scholars, students, and sponsors. Keep up the good work!

Roman Kushnir, MA, is a doctoral student at the Department of Language and Communication Studies at the University of Jyväskylä, Finland. The major is English studies. His research focuses on the construction of transcultural identity in modern Finnish American fiction. He pays special attention to the roles of both material and non-material cultural practices in this construction such as food, language, music and sport. His fields of interest include history of Nordic American immigration, Nordic American immigrant cultures and literatures, food studies, identity studies and ethnic studies.
View all posts by Roman Kushnir →
Tagged  Conference Review, Event review, Maple Leaf and Eagle Conference.
Bookmark the permalink.