Josephine Baker’s successful Parisian career is often cited as proof that France was a “colour-blind” nation in the 1920s, says Bethan Hughes, but this overlooks how Baker’s blackness was intrinsic to her success due to French perceptions of black sexuality. 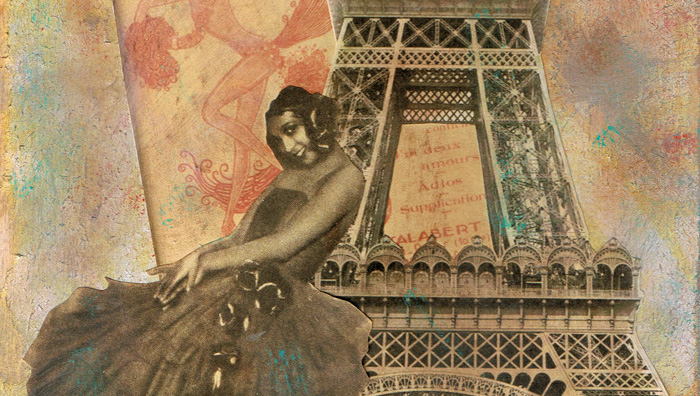 In Paris, in the 1920s, Josephine Baker’s erotic and exotic dance performances earned her the title of “Ebony Venus.” The most famous of which was Baker’s final act in the musical production La Revue Nègre – the ‘Danse Sauvage.’ For the ‘Danse Sauvage,’ Baker danced topless with the male Senegalese dancer Joe Alex. Both dancers were scantily clad and decorated with feathers and beads. The savage dance was an erotic visualisation of the primitivist trend sweeping across Parisian culture. The dance evoked an Africa filled with exquisite black forms, excessive nudity, and undeniable sexuality. La Revue Nègre relied on the stereotypes of blackness that were pervasive in French culture, and these stereotypes were what made the show, and the star, such a triumph. Baker was not only a dancer but also an actress, singer, and activist. She even received the Croix de guerre for her aiding the French Resistance during World War II. And yet, despite this varied career, Baker remains best known for her overtly sexual persona; a persona that I argue was based entirely upon French perceptions of black sexuality. Baker’s successful Parisian career is often cited as proof that France was a “colour-blind” nation. In contrast, I suggest that Baker’s blackness was intrinsic to her success. 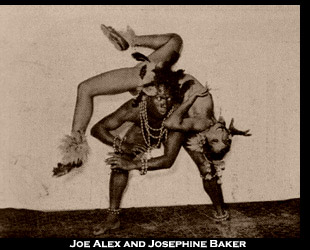 Josephine  Baker  arrived in France in 1925 at the age of nineteen. Prior to this, Baker, who was born in St. Louis, Missouri, had performed on the Theatre Owners Booking Association (T.O.B.A.) circuit. T.O.B.A., otherwise known as “Tough On Black Asses”, was a vaudeville circuit for African American performers, which provided entertainment for black audiences.[1] The circuit traversed the East Coast and Southern states. While in the South performers were forced to travel through towns in which racial prejudice reigned and the threat of violence was ever-present. Baker soon made it to New York where she escaped Jim Crow laws but not discrimination. Baker’s biographer Lynn Haney writes: “As a black cabaret dancer, she was expected to make the customers happy in ways other than singing and dancing. She was a ‘sepia lovely,’ a vessel for puritanical America’s repressed sexuality.”[2] Baker was a chorus girl performing for white audiences in the Plantation Club in New York when she was presented with the opportunity to go to Europe. Caroline Dudley, a white patron of the arts with a particular interest in African American music, invited Baker to appear in a new show in Paris, La Revue Nègre. Baker, who had not yet achieved the stardom for which she yearned, set sail for Paris on 22 September 1925. From the moment she arrived, Baker felt the excitement and liberation of the “City of Light”. In her last autobiography, Josephine, Baker recounts her first, eye-opening experience of French racial tolerance: “In America, Negroes were always told the dining car was full if there were white passengers eating. Here we were smilingly welcomed. We couldn’t believe our eyes.” Baker continues, “It was true – this was a free country. France was a wonderful place!”[3] 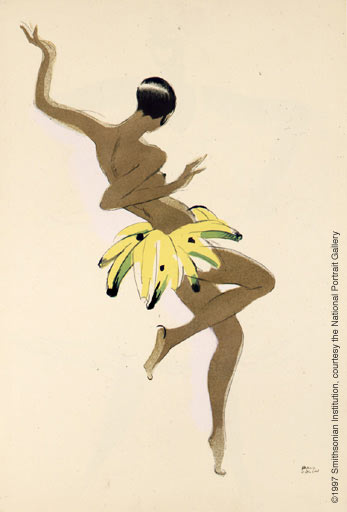 The star of La Revue Nègre was to be African American singer Maude de Forest but producers feared that her large frame would be off-putting to French audiences. Baker, who had instantaneously captured the attention of the poster artist Paul Colin, replaced De Forest. In his memoir La Croûte (1957) Colin recalls his first impression of Baker:

Dressed in rags, she was part boxer kangaroo, part rubber woman, part female Tarzan. She contorted her limbs and body, crossed her eyes, shimmied, puffed out her cheeks, and crossed the stage on all fours, her kinetic rear end becoming the mobile centre of her outlandish manoeuvres. Then, naked but for green feathers about her hips, her skull lacquered black, she provoked both anger and enthusiasm. Her quivering belly and thighs looked like a call to lubricity, like a magical return to the mores of the first ages. I still see her, frenzied, undulating, moved by the saxophones’ wail.[4]

Colin’s recollection shows how he was captivated by Baker’s sexuality and physicality. His fascination with Baker’s “kinetic rear end” and “quivering belly and thighs” echoes that of nineteenth century France with Sarah “Saartjie” Baartman, the “Hottentot Venus.” Baartman became the scientific reference figure for black female sexuality. Her large buttocks and elongated labia were mocked in popular culture and probed by scientists.[5] Unlike Baartman, Baker was treated as an object of lust rather than a scientific specimen. 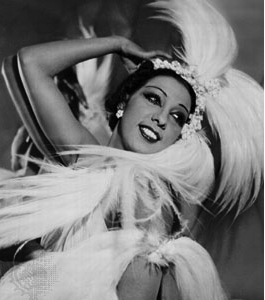 Baker was thrust into the spotlight but her new role had some new requirements. Baker was to appear nude. According to Phyllis Rose, author of the biography Jazz Cleopatra, Baker threatened to leave the show and return to the United States rather than dance topless.[6] She eventually relented, but then came the next request. Colin wished to sketch Baker and invited her to his studio. Baker reveals in her autobiography that she had a suspicion that he wished to draw her nude form, but she expressed discomfort with such a request. Baker would perform bare-breasted for an audience but she would not expose herself for one man in such an intimate setting. Baker hesitantly permitted Colin to remove her bra but did not want to fully undress. In Josephine Baker retells the story:

As he worked, he smiled at me from time to time. I gradually grew more relaxed. He obviously saw me as an object; not a woman but something to be painted. Suddenly he threw down his paintbrush and shook his head violently. What was the matter? What was he trying to say? I really must learn to speak French! He finally handed me a little sketch of myself completely nude. “No!” I gestured, and for the rest of the evening I managed to hold on to my panties. Monsieur Colin told me to come back the next evening.

Had he discussed my behavior at the theater? The next day several people drew me aside to explain that I would never be anything without the poster, that I would not be the first person or the last to undress in front of Paul Colin, that artists had certain rights and I as a mere beginner had certain duties. Just think – my likeness would be plastered all over Paris! Yes, but naked! What would they say in St. Louis?

That night I removed all my clothes.[7]

Baker conceded to the demands of the production and consequently launched herself to stardom. However, Baker was not unaware of the conditions of her stardom. She was the ‘Americanised African’ at a time when l’art nègre was in high demand. In the study Primitivist Modernism, Sieglinde Lemke insists that Baker’s stage persona was a “conscious and even calculating project.” Lemke maintains that Baker’s famous ‘Danse Sauvage’ was an astute piece of exhibitionist art born from Baker’s understanding of racist African stereotypes and their current appeal in French culture.[8] Baker recounts several occasions when she was reminded that her fame and her body were inextricably entwined. One such occasion occurred when Baker had been learning French, practicing singing, and taking dance classes in an effort to be taken seriously as a performer. Baker was cast as the young native Papitou in a silent French film called La sirène des tropiques (1927). Unfortunately, Baker’s film debut did not live up to her expectations: “They were filming a story about the Revolution. The main prop, a guillotine, made my blood run cold. ‘You’re on, Josephine,’ the director shouted. ‘It’s time for your belly dance.’ Because naturally Papitou danced exactly like Mademoiselle Baker of the Folies. ‘That’s one of the reasons people will come to see the film,’ Pepito [her manager and fiancée] gently explained.” 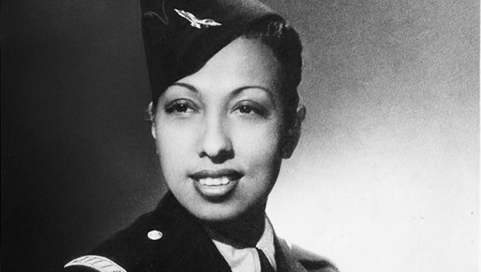 In 1925 Baker became an instant celebrity in Paris. The French purchased Josephine Baker dolls, costumes, and beauty products; and women imitated her hairstyle and took up sunbathing or used walnut oil to darken their skin.[9] The focus was her blackness. In a review of La Revue Nègre, French critic Pierre de Régnier described Baker using the common trope of the de-feminised black woman: “Is this a man?… Is this a woman?… Her lips are painted black, her skin is the colour of a banana, her hair, already short, is stuck to her head as if covered in caviar, her voice is high-pitched, she shakes continually, and her body slithers like a snake.”[10] The comparison to the banana – associated with Africans and monkeys – alongside that of caviar – associated with luxury and sophistication – is an interesting parallel where Baker, the dehumanised savage becomes a delicacy intended for French consumption. Baker returned to the United States in 1935 but there she was viewed as an uppity black by the white press, and light-heartedly teased by the black press. In preparation for her return, articles appeared in the Baltimore newspaper the Afro-American commenting on Baker’s celebrity status in France and how different things would be in the States. A photo of Baker appeared in the paper on 19 October, 1935, with the following caption: “Josephine Baker, the toast of Paris, who returned to New York, last week, for the first time in ten years, to essay a role in the new ‘Ziegfeld Follies.’ Costumes like this are what made her famous. Sometimes she wore only a bunch of bananas , but Broadway not being Paris, what will she wear here?”[11] Baker’s sensual persona and revealing costumes were intrinsic to her success in France, but even more so were French stereotypes of the primitive, savage, and erotic African “Other”.

Sound, The Second-Line, and the Politics of Post-Katrina Memory
The Historiography of Ethan Allen
Looking For Moses in NYC
Book Review: Against Self-Reliance: The Arts of Dependence in the Early United States by William Hun...
Storify of our #bookhour on THE HEART GOES LAST by Margaret Atwood
Pills, Politics, and Movie Magic: Big Pharma, the FDA, and the Dallas Buyers Club
Review: ANZASA Conference (Part Two)
60 Seconds With Emma Long

Bethan Hughes completed her masters in History at Queen's University Belfast in December 2014. Her dissertation "French Colours: Race, Americans, and French Culture during the Interwar Years" examines the limitations and complexities of colour-blind France by contrasting the experiences of black colonial subjects with that of black and white Americans. Her research interests include transnational perceptions of race, black identities, and the African Diaspora.
View all posts by Bethan Hughes →
Tagged  African American Culture, Black History, C20, Celebrity, Cultural History, Gender and Sexuality, Music, Popular Culture, Transnationalism.
Bookmark the permalink.