Conference Review: ‘Did Liberalism Fail in the United States after 1945?’

Conference Review: ‘Did Liberalism Fail in the United States after 1945?’

‘Did Liberalism Fail in the United States after 1945?’, American Political History Symposium, University of Glasgow, 1 June 2018

The inaugural American Political History Symposium was a welcome addition to this year’s conference calendar. Held at the University of Glasgow, this one-day symposium saw scholars from across the UK gather to discuss issues of identity and conflict in post-1945 US political history. The overarching question the conference sought to address, ‘Did liberalism fail in the United States after 1945?’ was well chosen, and of particular relevance to our present historical moment. The symposium showcased research from scholars at various stages of their careers, providing a friendly environment for postgraduates to offer their first conference papers while simultaneously demonstrating the strength and scholarly rigour of the UK’s American political history community. 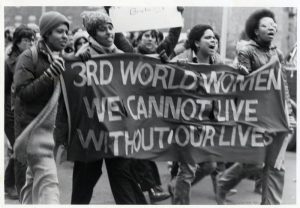 The Combahee River Collective in 1979

The opening panel featured papers touching on different aspects of identity politics. Mattias Eken (University of St Andrews) analysed the failures of liberalism during the 1960s, a period in which the Democratic Party’s position is often considered particularly strong, and engendered some lively discussion during the question and answer session. This was neatly followed by Tim Galsworthy’s (University of Sussex) discussion of how George Wallace’s use of Civil War memory rhetoric reflected his changing ideological stance throughout his political career. Galsworthy argued that Wallace began evoking the memory of Lincoln and other unionist figures later on in his career as he attempted to be seen as a serious contender for the presidency, rather than simply a southern segregationist. Charlotte Robertson (University of Edinburgh) offered a fitting conclusion to the panel with a paper addressing the origins of the phrase ‘identity politics’ itself, with a focus on the Combahee River Collective. Her insightful remarks demonstrated how these women felt unrepresented by the mainstream feminist movement and created a space where they could articulate their more radical ideas.

The second panel focused primarily on image building, with two of the papers focusing explicitly on the image of the US president. Fraser McCallum (Liverpool John Moores University) explored depictions of Kennedy, Nixon and Johnson in film, specifically looking at how these films shape people’s perceptions of recent American history. Interestingly, he also considered cinematic presentations of these presidents in relation to scholarly appraisals and reappraisals of their legacies. One of the most engaging and entertaining papers of the day was delivered by Rivers Gambrell (University of Oxford), who looked at Richard Nixon’s politicisation of American football. She argued that Nixon’s love of football helped him to make genuine political gains, and has shaped how subsequent presidents engage with sport. Karen Heath (University of Oxford) complemented the other speakers with her paper about the politics of federal arts funding, exploring what the debates around this funding meant for liberals and conservatives alike. Heath convincingly demonstrated the failure of conservative politicians to unite in opposition to programmes like the National Endowment for the Humanities even during periods when the Republican Party was especially strong. 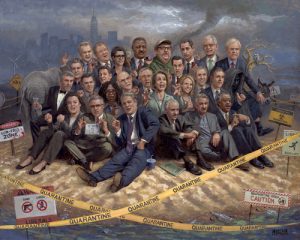 Perhaps unavoidably, the roundtable facilitated discussion of the United States’ current Commander in Chief, in a session titled: ‘The Trump Moment and Identity Politics: Lessons from the 1960s and 1970s’. Daniel Scroop (University of Glasgow) questioned whether the 1960s and 1970s are necessarily the best decades to draw lessons from, as opposed to say the 1890s or 1980s, which was definitely a worthwhile point to raise. Similarly, Robert Mason (University of Edinburgh) began his remarks by looking at the lasting impact of the New Deal. Most interestingly, Mason observed that the Republican Party’s relationship with identity politics is a complicated one, especially as it tries to establish itself as the party of the nation. Patrick Andelic (Northumbria University) returned the focus to the Democrats, arguing that though the late 1960s and 1970s marked especially difficult years for the Party, the 1980s should be viewed as a period of revival. Karen Heath’s exploration of the role of conservative art in the formation of conservative national identity was a highlight of the roundtable. She brought examples of such artwork, which greatly supported her comments about how such work continues to be important both to conservative identity politics and to conservative political identities. The lively question and answer session saw discussion of the incumbent’s use of social media, and whether any parallels could be drawn between this apparently recent phenomenon and the president’s use of the media in the past.

The organisers, Mark McLay and Joe Ryan-Hume (both University of Glasgow), ran a competition to choose a PhD/ECR to deliver the plenary. Joshua Hollands’ (University College London’s Institute of the Americas) plenary provided a perfect conclusion to the symposium. Hollands offered an intellectually stimulating discussion of his fascinating PhD research, which explores on the ways in which Sunbelt industries were a key battleground in homophobic workplace discrimination cases. His examination of how the AIDs crisis created an increasing need for gay couples to access each other’s health insurance, often provided through their employers, was one of a number of powerful examples Hollands offered to demonstrate the types of discrimination his research seeks to explore. Furthermore, he skilfully drew parallels between his own remarks and some of the earlier papers from the symposium, which helped to make this session an especially fitting conclusion to the day’s discussions.

The organisers are to be commended for putting together such an engaging and intellectually stimulating series of papers, demonstrating the appetite for a symposium such as this one, and hopefully paving the way for a second, equally successful American Political History Symposium in 2019. As attention on both sides of the Atlantic turns towards the upcoming American midterm elections, it is clear that research on contemporary American political history continues to be in high demand among scholars and the public alike