Designing a Module, Redux: Or, Why We’re Watching Buffy Again This Year 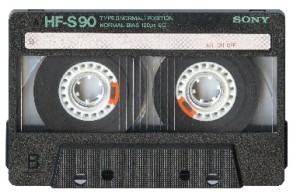 In High Fidelity, Rob (John Cusack) muses on the art of making a mixtape: “The making of a great compilation tape, like breaking up, is hard to do and takes ages longer than it might seem. You gotta kick off with a killer, to grab attention. Then you got to take it up a notch, but you don’t wanna blow your wad, so then you got to cool it off a notch. There are a lot of rules.”

Designing a module is a similar balancing act. I would hasten to say there are “rules”, but there are certainly things to take into account before you staple the module handbooks together at the start of the semester.

Since beginning my current teaching post just over a year ago, I have inherited a variety of modules with the invitation to modify them as I wanted, within the broad parameters of the pre-existing module specifications, which are little more than a list of learning objectives. Typically, each module comes with an approved outline, which details practicalities such as the number of credits a module is worth, the guidance for assignments (word counts, format and weighting), and four or five objectives that students should be able to achieve by the end of the module. As an example, by the time they complete a first year television studies module, my students should be able to “understand and analyse a range of television genres” and “critically assess their own viewing habits”. How I guide my students through these learning objectives is, in large part, down to how I design each module.

As someone starting out as a lecturer, this approach has been a useful introduction to putting together a module. There are other options—designing something completely from scratch, or else being asked to teach an existing module without the option to make any changes—but it has been helpful to have the basics in place while having the freedom to choose weekly topics, decide on readings, and figure out a variety of seminar activities.

In my first semester of teaching, I made some cursory changes to my adopted modules – switched a couple of the readings, shuffled the weeks around – but, aside from that, the modules remained much as they had done in previous years. This year, I am teaching the same modules again, only this time I had much more of an idea of what I wanted out of them, and a better idea of what worked and what didn’t.

Kicking off with a killer

Some modules lend themselves well to chronology. You’d have to be distinctly maverick to start an American history survey course with Watergate, for instance. Teaching media and film, I have been less bound by this approach, which does have its positives: not least, being able to “kick off with a killer”, as High Fidelity has it. It means I can start a third year television studies module with a clip of The League of Gentlemen, which might have students wondering why we just watched a clip of Mark Gatiss accidentally explode a pet tortoise, but does tend to get their attention and engage them.

Equally, though, there comes a point where you have to “cool it off a notch”, and figuring out how to organise the topics into weeks, and the weeks into a coherent module calendar, has been its own challenge. The building blocks need to be there in roughly the right order; chronological or not, there needs to be some sort of flow. This semester, my first year module starts off with some broad themes—television history, audience, and globalisation—and we’ve spent some time analysing Game of Thrones, which has been good for capturing the attention of the students and generating some lively debate. The remainder of the module is organised largely by genre, which has helped give each week a clear theme. We go from more established genres, such as news and soap opera, to later weeks on cult programming and children’s television, which both draw on and subvert existing generic expectations, and so by necessity are examined later in the term.

Additionally, there are inevitably topics that students are keener to study. Enthusiasm for the week on sitcoms is always going to higher than for the week on televised sport, and not just because I insisted last year on making my students watch the clip of England losing on penalties to Germany at Euro ’96. This often translates into a preference for essay topics, and while some topics will always have to come at the end of the module, organising things so that popular weeks come early enough for students to write a decent essay plan seems to benefit everyone involved.

You can’t always get what you want

At the end of High Fidelity, Rob decides to make his girlfriend a mix tape full of things she would like, a departure from his usual insistence on filling reams of cassette tape with music he thinks she should like. Here’s where the metaphor breaks down somewhat. There isn’t much getting around the fact that, at some point, my students are going to have to watch The Battleship Potemkin and, like it or not, the week on reality TV will always survive. Designing a module with too much focus on what the students want, rather than what might be good for them, doesn’t seem like the most advisable route to take. But that doesn’t mean there isn’t room for manoeuvre.

Last year, some programmes just didn’t work. The Wire, seminal piece of American television that it is, raised only disinterest and restlessness amongst the majority of my first-year students. I chose it as a good example of a quality crime drama, and one that strays from the black and white image of justice that often underpins television crime shows, but the result was underwhelming. For a first year group, something more formulaic, more typical, would have probably worked better as an introduction to crime drama as a genre, allowing students to understand the generic conventions before showing them something that works to push those boundaries. In retrospect, perhaps The Wire is better suited to a boxset binge and sufficient time to appreciate it as it unfolds, something that is difficult to achieve in a 2 hour seminar. I will still recommend it to my class, but this year we’ll be watching something a little more straightforward in our week on crime drama, in the hope that they’ll get more out of the session. 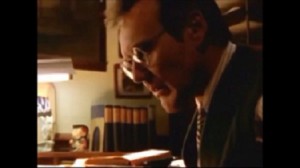 “The getting of knowledge should be tangible. It should be smelly.” – Giles, Buffy the Vampire Slayer, “I Robot, You Jane” (1997)

Equally, however, some things have stayed regardless of the initial reaction. When deciding what to screen in a week on cult television, Buffy the Vampire Slayer seemed like a good choice: a pretty significant slice of pop culture with a large, active fanbase, which would fit well with some of the fan theories we would be discussing in class. Unlike some sci-fi and fantasy series that might have been equally good cult examples, it’s also reasonably accessible to people who haven’t seen it before. Nevertheless, Buffy was not a hit.  According to my students: “the vampires are unrealistic”, “it seems kind of dated”, and (burn) “Angel was better”. Unlike The Wire, however, I haven’t dropped Buffy this year, because in a discussion of cult television, fandoms, and gender in fantasy series, Buffy is an important and influential piece of television, and one that will hopefully benefit their understanding of cult programmes, whether they immediately rush out to watch it all on Netflix or not. Which is why, like it or not, those exploding vampires are staying. We might even watch the musical episode this time around.

War Among All Puerto Ricans: The Nationalist Revolt and the Creation of the Estado Libre Asociado of...
Folktales in Randa Jarrar's 'A Map of Home' (2008)
'Brings Back Some Memories': Textual and metatextual experiences of nostalgia in Twin Peaks: The Ret...
Watchmen and Hunters: Reading Nostalgia, Repair, and Heroism in American Historical Fiction
“The show will go on”: the successes of Trump and Sanders push back the end of the primary elections
‘Still being sent to Nam to protect America's myths’: Anti-war Soldiering and the Challenge to Cold ...
A Relatable Past? Early America on the Small Screen
Historiography of North American Ethnobotany

Katie Barnett is currently a lecturer in Media and Cultural Studies at the University of Worcester. She received her PhD from the University of Birmingham in 2013, and her current research examines paternal constructions of masculinity, focusing particularly on representations of fatherhood in 1990s Hollywood cinema.
View all posts by Katie Barnett →
Tagged  C20, Gender and Sexuality, Masculinity, Media, Popular Culture, Television, Visual Culture.
Bookmark the permalink.