The pictures are for the most part mild, but in spite of this, though always exquisitely clear in reasoning and in visual quality, they pack a wicked punch. There’s nothing oppressively ‘photographic’ here, it isn’t a long nose poking into dirty corners for propaganda and for scandal, there are no trick shots, the composition isn’t a particular feature – but the pictures talk to us. And they say plenty. 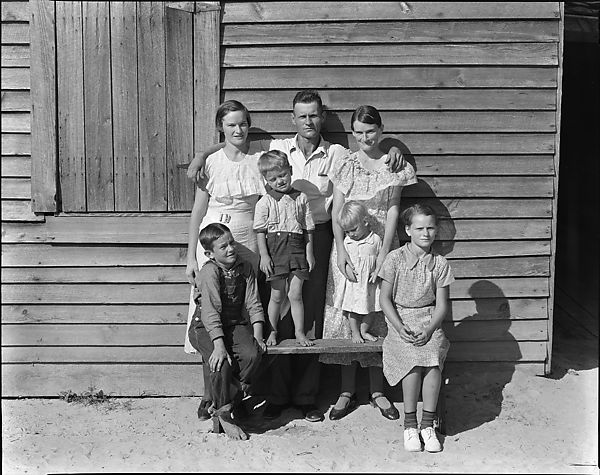 In the year of 1936 in Hale County, Alabama, American writer James Agee and photographer Walker Evans spent the summer of their collaborative verbal-visual book project collecting both photographs and written testimony of Americas rural populace. During the Great Depression, after the 1932 Presidential Election during which Franklin D. Roosevelt came into power with his “New Deal” instead of Hoover’s “Laissez Faire Policies”, a prioritized concern about the national agriculture became apparent. Under these circumstances, the prescribed focus of both Agee and Evans thus shifted onto the harshness and predicament of Southern tenant farmers, especially sharecropper families [1]. The Southern sharecroppers marked a group of people at the margin of both historical time and the geographical space of United States. Living not only in the Deep South, haunted by economic ruin and racial tension after the American Civil War and the Reconstruction era, they also suffered from the disastrous effect of the Great Depression in which the matrix of American socio-economic life collapsed following the Wall Street Crash of 1929.

Many critics have talked about the written content of James Agee in his collaborative work Let Us Now Praise Famous Men (1941) with Walker Evans, yet this short piece of work is concerned with the latter’s iconic effort to better represent rural sharecroppers through the medium of portrait photography. James himself tends to consider Evans as an indispensable partner and intensely asserted their complementarity. In the “Preamble” to Let Us Now Praise Famous Men, he claimed that “the camera seems to me […] the central instrument of our time” (11), where we can discover the importance of photographical work in Agee’s viewpoint. Evans demonstrates his own understanding and reflection of the marginal, invisible people away from public attention, and provides us with a historical scene through his camera lens.

Evans classified his images into three sorts: personal portraits and group photos, exterior and interior farm, and surrounding places. Almost all the portraits are a close-up or a medium-length shot, with Evans seemingly uninterested in long shot photography. Kress and van Leeuwen call such pictures ‘demand’ pictures – “the people in the picture symbolically demand something from the viewer” [2]; that ‘something’ amounts to reflective emotions and spiritual resonance ‘from the viewer’. As to the point of view, Evans captures the profile description of his subjects through fronted, central photography to “increase audience identification and involvement with represented participants” [3]. Evans captured these photos to verify the stark tenant life in the American South. Different from the dominate influence of Pictorialism, Evans remained true to his own photographic doctrines which “argued for graphic, black and white photographs full of texture and detail […] Instead of allegorical or symbolist-inspired subjects, they focused on everyday things” [4]. 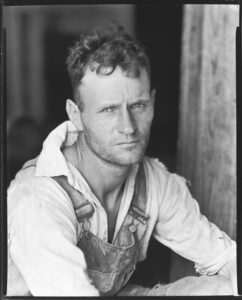 The portrait of Floyd Burroughs is one of the most eminent pictures in the book: unkempt hair, locked brows, slight wrinkles, uncleaned beard, and rough skin – all depict a middle-aged male who was bound to support his tenant family. Wearing a scruffy linen shirt with rough selvedges and a worn-out jean-overall, Mr. Burroughs sits on the porch of his home with his elbows curled on his knees. A frontal, direct perspective is used to connect viewers with the represented participant, in order to increase the identification of the sharecropper whose tired expressions betrayed the hardship of Depression-era rural life. His marginal identity as a tenant farmer and the pressure of his lived predicament appear to restrict him when facing the lens, before which he seems uncomfortable as viewers “‘observe him in a detached way and impersonally as though they are specimens in a display case” [5].

Mrs. Burroughs, a young woman, thirty or so years older, is elsewhere photographed leaning against a wooden wall. She is thin and has a striking appearance with a sense of starkness aided by the monochrome film, and seems exhausted. She is half squinting at Evans’ camera, her elongated brow furrowed and lips pursed. Her hair is jet black and unkempt, as is the thin printed blouse with an open neckline that she wears. Her frown, pursed mouth and stiff expression imply her nervousness and slight fright. Robert Fitzgerald and Lionel Trilling singled out this image and commented it as: one of the finest objects of any art of our time […] The gaze of the woman returning our gaze checks our pity […] With all her misery and perhaps with a touch of pity for herself, [she] simply refused to be an object of your ‘social consciousness.’ She refuses to be an object at all. Everything in the picture proclaims her to be all subject. [6] 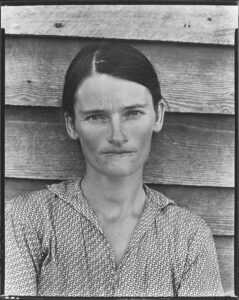 Allie appears curious but slightly anxious before Evans’ lens, ostensibly uncomfortable with this odd machine staring at her. Evans intended to set up a ‘symbolic relation’ between the female Southerner and the contemporary era, by which he characterizes her toil and diligence that result from the sharecropping background mired in desperate poverty.

William Carlos Williams demonstrated the semiotic meaning of Evans’ visual images: “It is ourselves we see, ourselves lifted from a parochial setting. We see what we have not heretofore realized, ourselves made worthy in our anonymity” [7]. Walker Evans did contribute to the revelation of Southern hardship and his portraits of tenant families and their lives attracted exterior commercial and artistic attention. We can see the generative influence on subsequent works, for example from the Pulitzer-winning work And Their Children After Them (1989) by Dale Maharidge and Michael Williamson which bears the hallmarks of Evans’ signature lyric documentary style.

James Agee, as a Southerner himself, did not suppose his book could affect great social change but claimed at least there would be “the hope that the reader will be edified, and may feel kindly disposed toward any well-through-out liberal efforts to rectify the unpleasant situation down South” (Morrison XI). The photographer, Walker Evans, creates an archive of American past with a great moral intensity through the depiction of local people, vernacular architectures, and its domestic interiors. The dilemmatic reaction to the shot was the inward revelation of their complex identities, in which lived both their fear desire. Probing into various visual meanings of these photographs, maybe we can also exhume its periodic significance and cultural values, which Walker Evans detected through his camera lens decades ago.

Bowen Wang is a current PhD student in English Literature, Trinity College Dublin (fully funded by TCD-CSC scholarship programme). He received his MSc in Literature and Modernity at University of Edinburgh, following the completion of his BA in English Language and Literature at Sun Yat-sen University. His research interests include literary modernism, experimental form, visual culture and aesthetics.
View all posts by Bowen Wang →
Tagged  Depression, Modernism, Photography, Walker Evans.
Bookmark the permalink.