This is the first post in a special series exploring and discussing artefacts from a selection of Adam Matthew Digital collections. This article uses primary sources from the ‘American Indian Histories and Cultures’ collection, which can be accessed here. Adam Matthew is pleased to be sponsoring the second British Association for American Studies Digital Essay Competition. The winner will receive £500 and one year’s access to an Adam Matthew primary source collection of their choice. For more details, including how to enter, visit http://www.baas.ac.uk/adam-matthew-digital-essay-prize/ 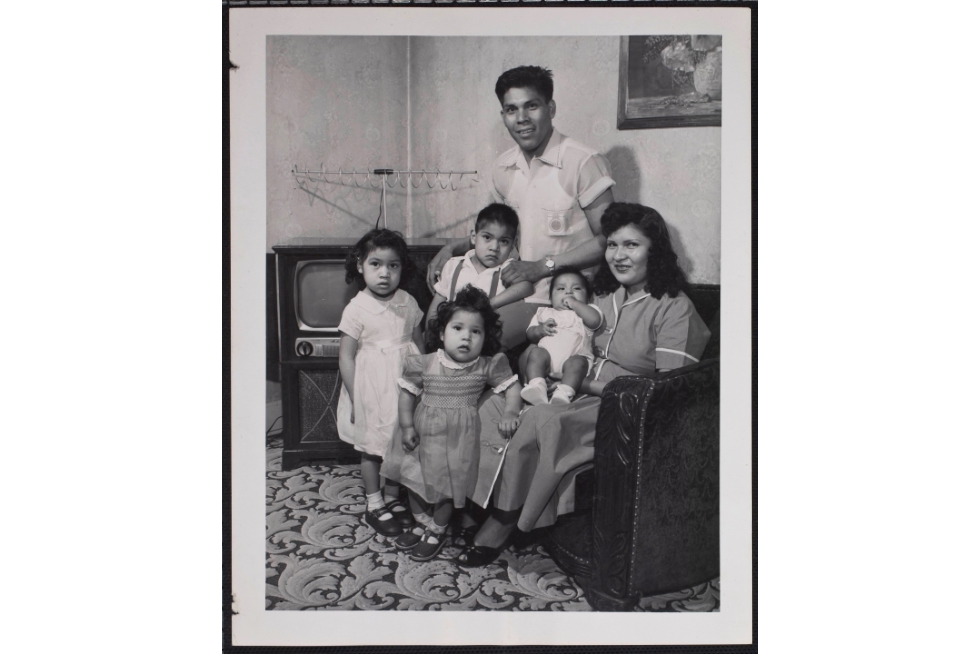 This 1956 photograph captures a smiling couple with their four children, all dressed in their Sunday best – crisp white shirts for father and son, frilly dresses for the two little girls. The family poses around an armchair in front of their television set, displaying their homely apartment. This is not your average white middle-class family, however. Paul Billie and his wife were members of the Mississippi Choctaw Tribe, who relocated from Mississippi to Chicago in 1953. The only giveaway to the family’s background is their dark hair and skin.  The photo’s caption reads: “Mr. and Mrs. Paul Billie, Choctaw, and their four children. Paul and his family arrived in Chicago on August 3, 1953 from Philadelphia, Mississippi. The Billies are one of the first Choctaw families to come to Chicago, and correspond quite regularly with the people back home. They have interested many other Choctaws in the opportunities here in Chicago.”

The Billies were also one of the first Mississippi Choctaw families to participate in Bureau of Indian Affairs’ (BIA) Relocation program. Relocation, launched in the early 1950s, was designed to move Native American individuals and families away from their reservations into urban areas. The basic principle behind the policy was that Natives, separated from their communities and provided with paid employment, could be successfully integrated into modern American life.

The basic working structure of relocation was outlined by Glenn Emmons, BIA Commissioner (1953-1961) in a memo to the Secretary of the Interior in May 1955: “We furnish transportation both for the worker and his family to the community he has selected. We help in finding a job, in locating a suitable home, and in getting generally adjusted in the new surroundings.”[1] The program expanded throughout the 1950s; in 1956 Congress approved a threefold increase of relocation funding and by July of that year, around 12,625 Natives had relocated from reservations to cities.[2] Before World War II most Native Americans lived on tribal lands, but today 78% reside oustide of reservations. This program sparked a dramatic shift in the lives of Native Americans, but has been remarkably neglected in the historiography of US urban life and even twentieth century Indian policy.

The Adam Matthew’s Digital collection, ‘American Indian Histories and Cultures’ contains important resources for uncovering the complexities of this period, including the extensive Bureau of Indian Affairs Indian relocation records.[3] The photograph of the Billie family appears amongst these documents, collected by BIA officials, including a multitude of other photographs, promotional materials and newspaper clippings. These documents were evidently intended to showcase the successes of the program – and the Billie family presented a perfect model of this, with their large photo prominently displayed on the first page of a photo album presenting relocatees in Chicago.

It is no accident that the Billies are photographed in front of their television set or that they are dressed in pristine clothing, indistinguishable from their Euro-American peers. Looking closely, a packet of Lucky Strike cigarettes is even visible in Paul Billie’s shirt pocket, indicating that he was in a position to afford such personal luxuries. Indeed, the picture caption states that Billie was “working for the A&P Bakery as a baker’s helper at the rate of $1.69 an hour.” In 1956 the US minimum wage was around $1.00 an hour.[4] Life in Chicago, thus, presented a stark contrast to the living conditions on Mississippi Choctaw tribal lands, where only three of the 227 houses had access to clean water.[5]

The photos in the collection present relocation as a success, seamlessly integrating Native peoples into urban America. Scholarship, however, shows that the policy was not unequivocally successful. Some of the first Mississippi Choctaw families to relocate ended up returning home from Chicago. Murphy Solomon, for instance, remarked that the, “Chicago pavement was too hard for his feet”.[6] Indeed, life in urban areas required Mississippi Choctaws and other Native Americans to adjust to Euro-American lifestyles. This is evident, for instance, in how the collection of photographs refers to Native women only by their husband’s name. While Choctaw culture is traditionally matrilineal, with women holding a prominent place in society, Mrs. Billie’s first name is not provided anywhere in the records.[7]

The Mississippi Choctaw Tribal Council remained sceptical about relocation throughout much of the 1950s and 1960s. In April 1954 council minutes noted that a total of seventeen tribal members had paid employment in Chicago, and that nine relocation applications were pending – but with lack of funding the program had virtually halted. Council members referred to the program as ineffective and expensive.[8] Later that decade the BIA appointed a relocation officer for the Choctaw Agency, and the tribal council created a Relocation Committee. Following these developments, seventy-five families relocated annually to Chicago and other cities across the country.[9] However, the tribal council still did not wholeheartedly embrace the policy, instead it advocated programs for the work placement of Choctaw members in local industries.[10]

Moreover, while the ‘American Indian Histories and Cultures’ contains little hint as to what became of the Billie family after the relocation program lost federal funding and died down in the late 1960s, Mississippi Choctaw records show that Paul Billie kept contact with his tribe. He wrote to the tribal council in 1970, enquiring about changes to membership regulations in the tribal constitution.[11] This indicates that the Billies maintained their Choctaw identity despite having lived in Chicago for nearly two decades. Indeed, relocated Native Americans faced serious racial discrimination in cities – but many successfully adapted their cultural identity to their new environment and remained resilient.[12] Together members of disparate tribes from across the country set up American Indian Cultural Centers to organise community support, as well as social events like powwow dances and basketball games.

The American Indian Histories and Cultures collection contains clear evidence of this, with a Chicago Indian oral history archive and photographs taken by a local camera club counterbalancing the BIA files on relocated families and their carefully collated imagery. Together, these documents can aid scholars in gaining a further understanding of this pivotal stage in both Native American and urban US history. Relocation was the catalyst for tens or even hundreds of thousands of Native peoples to leave their tribal lands for cities – but not to give up their identities.

Reetta Humalajoki is an early career researcher who works on federal American Indian policy in the twentieth century, particularly focusing on the Termination period (1953-1970). She completed her PhD in 2016 and is currently revising her thesis for publication. Reetta teaches American history at Durham University and Newcastle University.
View all posts by Reetta Humalajoki →
Tagged  C20, Native Americans, Politics.
Bookmark the permalink.