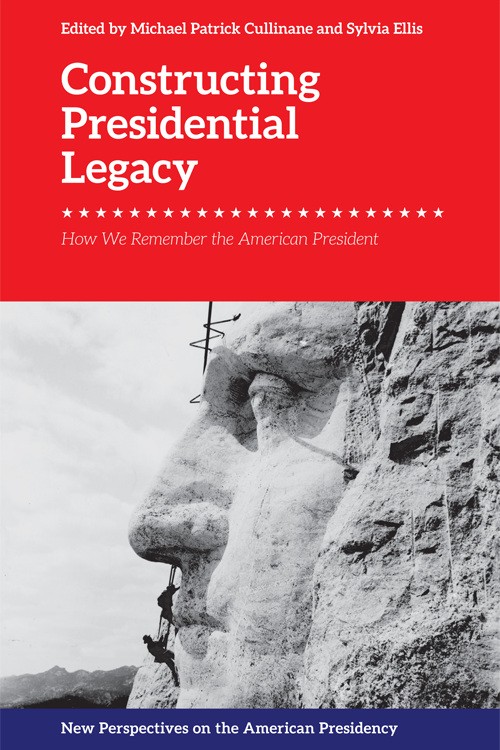 From presidential farewell addresses to depictions of presidents in film, advertising and literature, Michael P. Cullinane and Sylvia Ellis’s edited volume Constructing Presidential Legacy offers a valuable addition to the growing body of literature concerning American presidential legacies. The ten essays within the collection demonstrate the vast array of ways and means by which presidential legacies are constructed and developed over time. In addition to exploring traditional forms of memorialisation such as statues, this volume also considers more modern forms of commemoration including depictions of presidents in advertising, as well as the president’s role in construction of his own legacy. Cullinane and Ellis succinctly justify the significance of this collection as follows: ‘if our perception of the past is shaped in any measure by memorialization and memorializers, we owe it to ourselves to consider these sources and their impact’ (3).

This multi-disciplinary volume includes chapters by historians, political scientists, literary scholars and film scholars, with each chapter focusing on a different method of presidential commemoration and memorialisation. Benjamin Hufbauer explores the development of the presidential library system, and the ways in which this ‘self-commemoration’ influences how we understand executive power. He argues that within these spaces historical truth is ‘disrupted as much as it is reinforced’, leading him ultimately to question the whether these institutions have a responsibility to the public to depict history accurately. Patrick Hagopian also explores physical monuments to presidents, offering a case study of the debates over the new Eisenhower memorial, including the role of Eisenhower’s family in influencing its final design. Both chapters demonstrate the ways in which various actors consciously distort historical ‘truths’ in order to influence how future generations interpret the legacies of the presidents in question.

Four further chapters explore how legacy was considered by figures within the White House, including the incumbent president. Thomas Tunstall Allcock argues that the role of diplomacy in shaping a president’s historical legacy is both important and underappreciated. Crucially, he connects the importance of public image to the endurance of a president’s long-term legacy. Along similar lines, Richard V. Damms looks at the context in which Eisenhower’s farewell address was written, contrasting Eisenhower and his administration’s hopes for the speech with its subsequent reception ‘both by contemporaries and in popular memory’ (77). Emily Charnock also looks at the role presidents and their aides play in the development of the incumbents’ legacies. Her chapter on presidential travel convincingly argues that the travel itinerary of outgoing presidents reflects what each one hoped to be remembered for in the long term. Sylvia Ellis’s final chapter looks more broadly at the evolving role of new technologies in presidential communications, and the implications of these developments for the sources we use to examine presidential legacies in the future. Each of these chapters therefore offers a convincing explanation of a different way in which presidents and their aides can impact on long-term interpretations of their respective administrations.

This volume is perhaps most valuable because of the editors’ decision to include a vast array of acts of legacy construction by individuals and interest groups not affiliated to the White House. Gregory Frame’s chapter explores how films about Lyndon Johnson’s presidency have contributed to a re-evaluation of his legacy among the public, while Mark McLay’s chapter argues that landmark anniversaries can ‘trigger a reassessment of a president’s legacy’, also taking Johnson’s legacy as a case study (208). Focusing on presidential image, Michael Cullinane argues that advertisers are ‘agents of public memory’ (57). He looks at how commercial advertising has used the images of the American presidents to market products, explaining how our perceptions of the office of the presidency and its occupants have been influenced, at least in part, by use of the presidency in marketing strategies. Kirstin Cook also focuses on language, arguing that presidential legacies are informed by ‘a symphonic host of signifiers, fictive and real’, including depictions in literature (27-28). Though these chapters tend to focus on specific case studies rather than offering holistic surveys, they remain convincing and well-argued, and demonstrate scope for more extensive studies of these aspects of legacy construction.

This multi-disciplinary volume acts as an excellent introduction to the diverse range of ways in which presidential legacies have been used and developed throughout the twentieth century. Several of the chapters indicate areas where research might be expanded, such as Charnock’s suggestion that the ‘effectiveness’ of presidential travel in influencing long-term image promises a potential avenue for research. Given the succinct nature of many of the chapters, this book is perhaps most useful for scholars seeking an overview of the various avenues of legacy construction currently being investigated by academics across a range of disciplines. Furthermore, rather than focusing on a particular administration, this volume offers case studies of a range of presidents, primarily (though not exclusively) from the twentieth century. It is therefore a valuable read both for scholars of presidential legacy and for scholars of the twentieth century presidency more widely.

Overall, this collection succeeds in offering the reader a wide-ranging yet tightly-focused overview of various types of tribute to American presidents, and the way such tributes have influenced national memory. For people seeking an introduction to the study of presidential legacy, this readable and engaging work offers an excellent place to start before delving into longer studies on the topics or presidencies covered within this volume. In terms of book-length studies of individual presidents, Michael Hogan’s The Afterlife of JFK (Cambridge: Cambridge University Press, 2017) and David Greenberg’s Nixon’s Shadow: The History of an Image (New York: W.W. Norton & Company, 2003) both explore many of the methods of presidential commemoration outlined in Cullinane and Ellis’s collection.

In The Fields Of Democracy: The Midwest In World War I
Raymond Carver: Thirty Years On
BOOK REVIEW: HILLBILLY ELEGY: A MEMOIR OF A FAMILY AND CULTURE IN CRISIS, BY J.D. VANCE
Review: The Cartographic Imagination: Art, Literature and Mapping in the United States, 1945-1980
Historiography of North American Ethnobotany
Book Review: The Routledge Handbook of Literature and Space by Robert T. Tally Jr.
Keynote Competition 2018
Review: HOTCUS PG Conference 2017 - Contesting Power: Rights, Justice, and Dissent in America and Be...