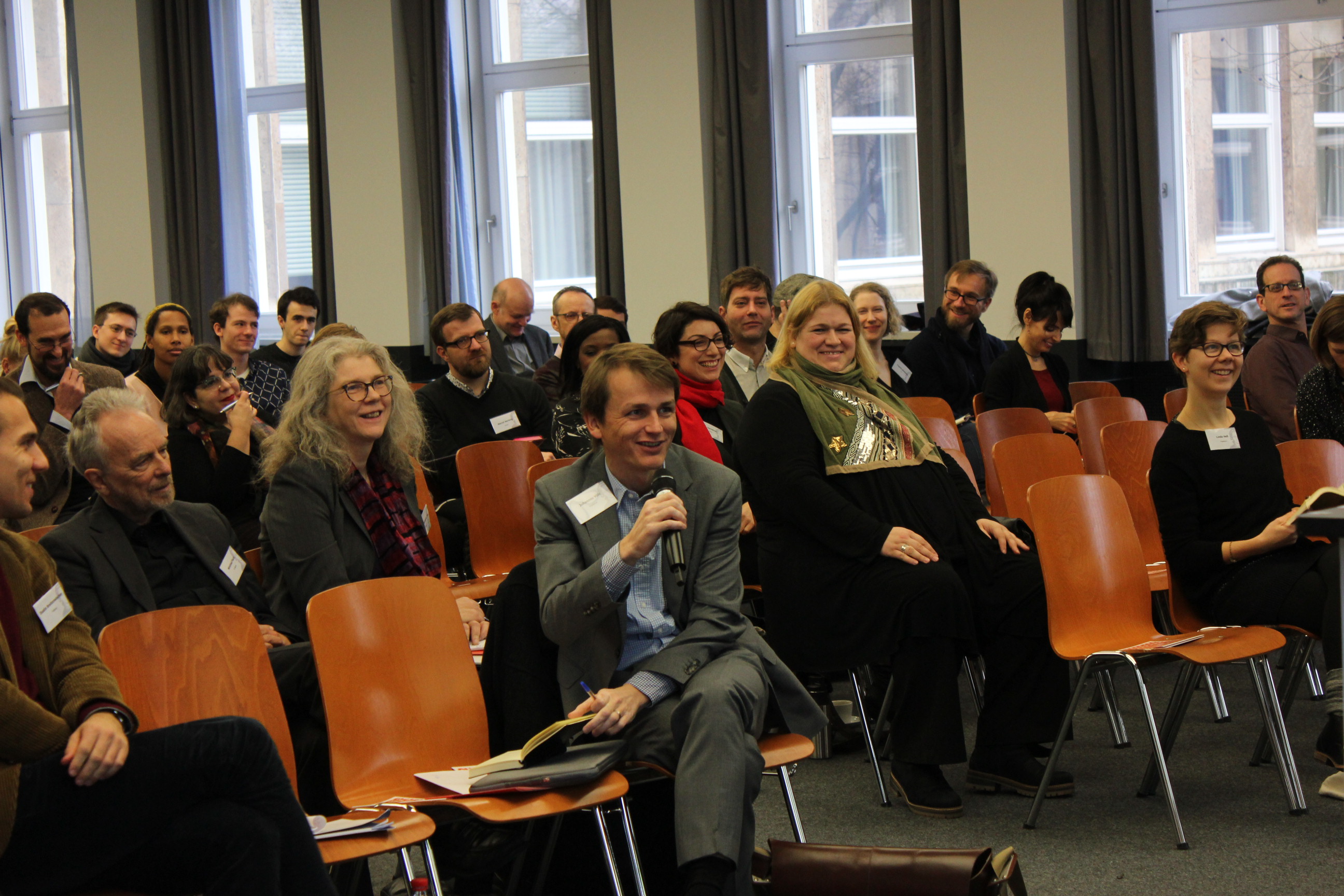 In 1998, the Chronicle of Higher Education featured an article entitled: ‘Wearying of Cultural Studies, Some Scholars Rediscover Beauty.’ The two decades since have seen an intense debate about the status of aesthetics, often conceptualized more narrowly as poetics or form, within humanistic scholarship and teaching. Marjorie Perloff’s presidential address at the MLA Convention in 2006, in which she asked literary scholars to return to literature and its aesthetic qualities as their primary object of study, marks only one of the debate’s high points. In view of this history, one may be tempted to dismiss the conference flyer’s presentist-futurist claims that ‘Aesthetics is coming back’ and that a reconsideration of aesthetics has taken place ‘Only in the most recent past’ as advertising rhetoric. One may wonder whether, after two decades, there is anything left to say on the topic. But here is the big BUT: in the province of American Cultural Studies, the (re)turn to aesthetics is indeed more recent and takes a far more political perspective than seen in the ‘return’ of aesthetics within the more philological and less politically oriented quarters of the MLA since the late 1990s. The former is animated by the utopian desire that conference host Johannes Voelz (Frankfurt) described as a central characteristic of American Studies as practiced under the auspices of the American Studies Association. As speaker Lee Edelman (Tufts University) put it, what was at stake in the Frankfurt conference was really the ‘the progressive return of the aesthetic’.

Assembling major theorists of the field from both Germany and the US, the strength of the conference was its interrogation of the question of aesthetics, governed by the imperative of a progressive politics, from a variety of angles. The conference title suggests the multiple dimensions of the ‘return of the aesthetic’ that scholars addressed throughout the proceedings: the reconfiguration of aesthetic theory, the arts’ (lack of) concern with form, beauty, and the sublime, and scholarly thinking and discourse as an aesthetic practice itself. 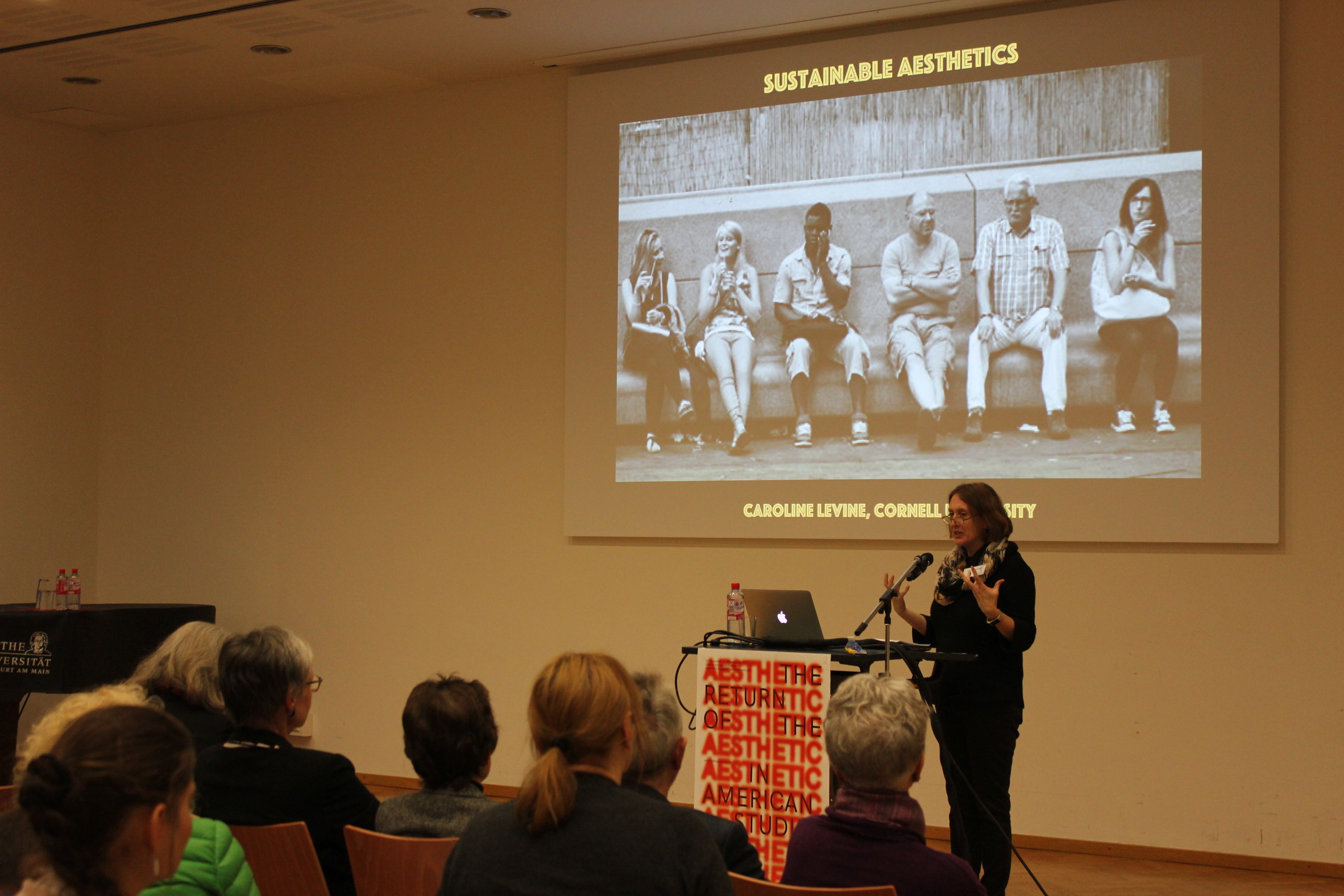 The speakers’ collective, conceptual ‘opening up’ of the aesthetic as a discipline, object, and practice in American Studies can best be grasped by thinking through some of the key terms and tensions that emerged. First of all, what American Studies has trouble with when it comes to ‘aesthetics’ became most evident in speakers’ frequent focus on form or style, for instance in presentations by Rieke Jordan (Frankfurt), Elisabeth Bronfen (Zürich), Susanne Rohr (Hamburg) and Jennifer Ashton (UI Chicago). While aesthetic value, one may argue, has always been instrumental to the progressive project, speaking about form instead of aesthetics seemed to be one way to speak about the aesthetic dimensions of art and literature without the baggage of attributing value and creating cultural hierarchies. Discussions also made clear that what American Studies, secondly, needs to activate from within aesthetics is its kinship with aisthesis. Even if the dimension of the sensual can be seen as always already part of the aesthetic, the repeated recourse to Baumgarten, for instance by Bernd Herzogenrath (Frankfurt) and Julius Greve (Oldenburg), and to contemporary affect theory, by Eugenie Brinkema (MIT) and Luvena Kopp (Tübingen), suggests the need for a conscious consideration of aisthesis within and alongside the aesthetic in a contemporary American Studies – perhaps because politics, the place of utopia, seems to be increasingly governed by appeals to affect rather than intellect.

However, the turn to affect must be seen as quite contrary to another dynamic of the conference: aesthetics was also reconceptualised as artistic action, intention, or the will to shape. Reception oriented scholarship, in other words an interest in aesthetic experience, can be seen as problematically – neoliberally – moored in the individual and thus irrelevant, if not detrimental, to productively engage with art’s capacity to point to structures of inequality. As Walter Benn Michaels (UI Chicago) suggested, through a focus on art that meta-aesthetically foregrounds action and declares itself autonomous from the political and the aesthetic, we may recover the political aspect of art in its intentionality rather than in its product or function. The autonomy, or freedom of art (Winfried Fluck, FU Berlin) was brought into productive tension with notions of encounter in Bernd Herzogenrath’s (Frankfurt) and Hanjo Berressem’s (Cologne) arguments for and performances of a scholarly, aestheticized ‘thinking with’ art as a way to generate knowledges through aesthetic practice rather than by thinking ‘about’ art in a gesture of drawing boundaries and assuming ‘separate spheres’ for thought and beauty. 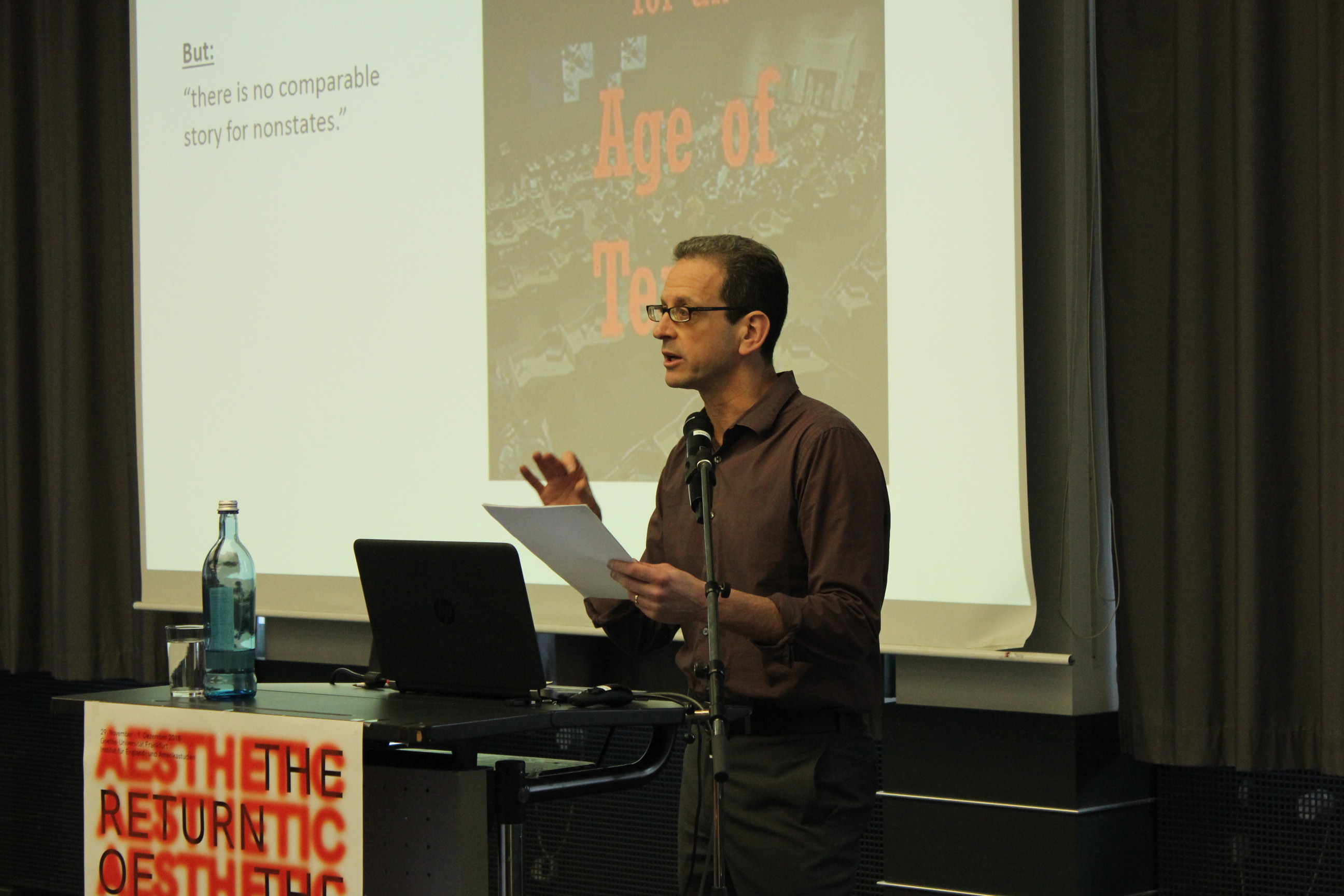 The conference also returned frequently to American Studies as attached to negativity and undoing: the discipline has focused on disrupting existing power structures as a way to bring about a better world, but has hardly engaged in analyzing art’s modelling of alternative structures of sociality. Caroline Levine (Cornell) specifically advocated for an embrace of an aesthetics of sustainability: an attention to forms – often de-valued as kitsch – that give shape to daily routines, working infrastructure, and sustainable forms of togetherness, such as happy endings and narratives of the ‘struggling team’.

Perhaps most pervasively, speakers engaged in the rethinking of representation, performance, expression, and narration – which can be thought of as both political and aesthetic terms – and, in doing so, returned to key texts and thematic concerns of the discipline. Johannes Voelz (Frankfurt) argued for an aesthetics of populism as one that claims, through the space of the rally, that representation is expressive and that this non-representation, this ‘will’ of a unified people, is put into practice through, for instance, the collective performance of cheers. Visual representation, Jennifer Greiman (Wake Forest) suggested, may be what enables democratic participation, such as in the figure of the ‘Round Robin’ in Melville’s Omoo; and Russ Castronovo showed how the Gothic narrative might provide a framework to wrestle with big data’s threat of sublimity. 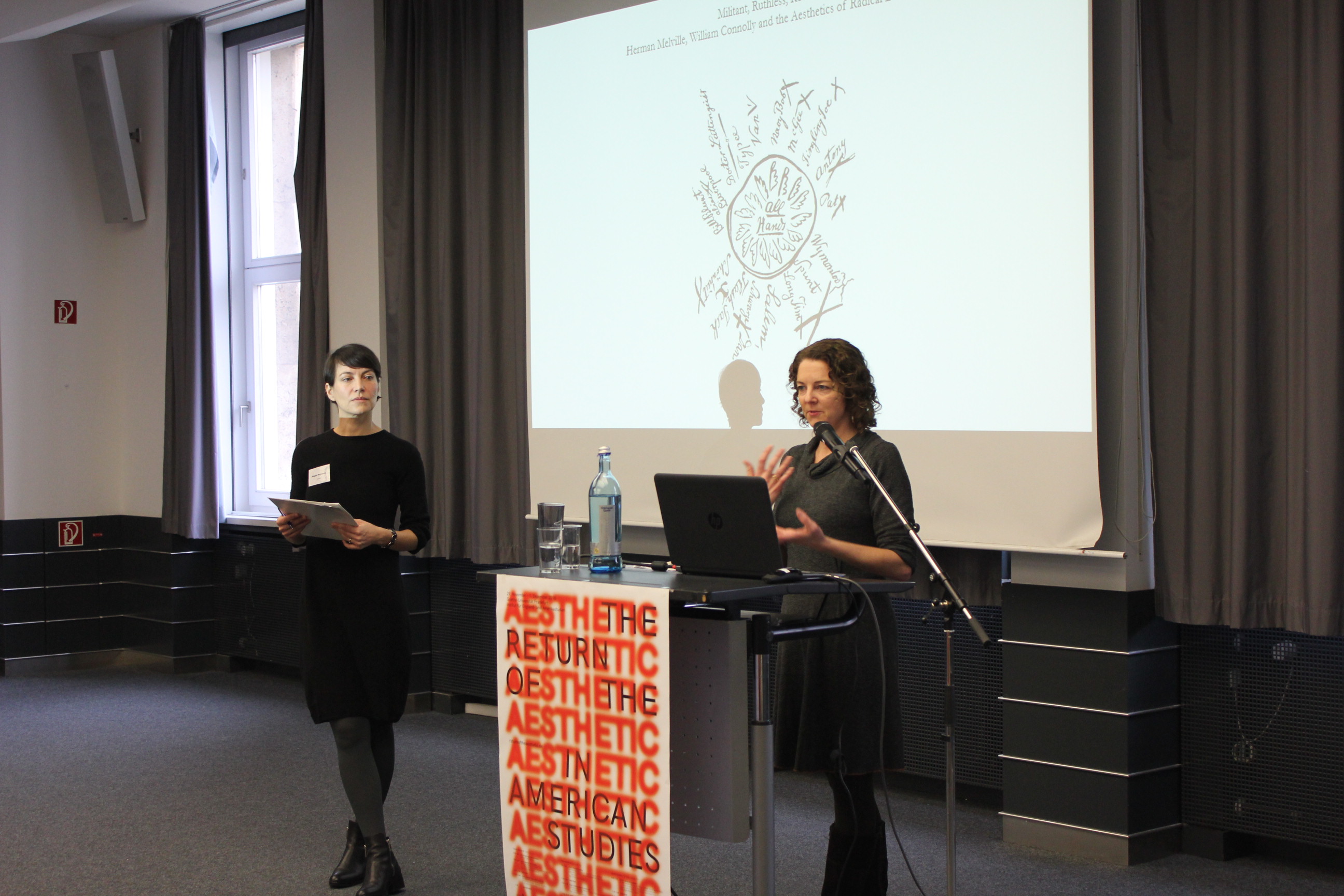 The conference offered a fascinating ‘opening up’ of the aesthetic in American Studies. It ultimately demonstrated that scholars widely disagree about what we mean by ‘the aesthetic’, what its status was and is, or where to go with it in the future. But almost as interesting as what speakers actually did grapple with is the refusal to address at least two issues that seem central to the ‘return of the aesthetic’ in the discipline: one, its implications for teaching and two, its potential role in rebranding the humanities in the current struggle for resources. Hence – both with respect to speakers’ disagreements and omissions – there is clearly a need for a fresh and sustained theorizing of the aesthetic if cultural studies and the humanities more generally want to avoid sliding into either all-too-facile ideologizing or empty formalism. If, that is, they want to remain socially and politically relevant by making a contribution that only the humanities, and not the empirical sciences, can make.

One could hardly have wished for a more stimulating beginning of such theorizing than ‘The Return of the Aesthetic in American Studies’. If you now wish you’d been there, there’s good news because the theorizing continues: visit the conference website (https://returnoftheaesthetic.de/) to watch in-depth conversations between speakers and fellow experts recorded during the conference. Furthermore, the conference papers will be published in the 2019 volume of the Yearbook of Research in English and American Studies, published by Gunter Narr (Tübingen).

Book Review: Slavery at Sea by Sowande' M. Mustakeem
Latinos and the Language Question: Arizona, 1967-70
Review: Historical Fiction in the United States since 2000
Book Review: The Rise of Common-Sense Conservatism: The American Right and the Reinvention of the Sc...
Review: Special Relationships: Poetry Across the Atlantic Since 2000
Enemies at Home: THE AMERICANS Season Three
Review: PG BAAS Conference - Connection and Collective Action: Past and Present (Online)
‘Let Us March On’: Lee Friedlander’s Civil Rights Photography and the Revolutionary Politics of Chi...