‘Supposedly Fun Things: A Colloquium on the Writing of David Foster Wallace’

Held at Birkbeck, University of London

A building as twistingly complex as some of Wallace’s sentences provided the venue for Birkbeck, University of London’s ‘Supposedly Fun Things: A Colloquium on the Writing of David Foster Wallace’, an important event in the field of Wallace Studies. The first wave of Wallace scholarship had a vested interest in eulogizing Wallace in order to justify the study of him. Now that his place in the canon seems reasonably assured, there is an opportunity for scholars to conduct more critical and probing analysis, a development that was evident in many of the papers. 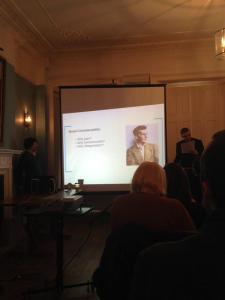 Appropriately enough, the first panel dealt with aspects of Wallace’s reception and subsequent canonization. Dr. Tony Venezia (Birkbeck/Middlesex University) began by noting that Wallace is unusual, as the first research into his work was undertaken by online fans rather than scholars. His argument centred on the need to rethink the boundaries between online fandom and academia. Dr. Matthew Sangster (University of Birmingham) followed with the assertion that Wallace was one of the last authors to write without the influence of the internet. He put forward that this has shaped his online reception, with fans revering his works as relics from a recognizably contemporary – yet – pre-internet age. Dr. Emma Southon (Coventry University) completed the first panel with a refreshing and much-needed corrective to Wallace hagiography. She exposed how different communities of Wallace acolytes – whether on the internet, in the mainstream press, or in academia – are guilty of picking only one version of Wallace to extoll in the belief that ‘Dave’ understands us. All the more impressive for being a last-minute stand-in, Dr. Southon’s paper set the agenda for the rest of the day in highlighting the need for a more objective body of criticism to emerge.

The second panel was focused on Wallace’s engagement with Ethics and Aesthetics. Erin Reilly (Birkbeck) provided a compelling reading of Wallace in relation to Emmanuel Levinas, proving particularly astute in noting the ‘ethical primacy’ of (twisted) faces in Wallace’s work. Dr. Martin Paul Eve (University of Lincoln/Birkbeck) followed with an insightful analysis of ‘Consider the Lobster’ in relation to behaviourism, preference, and Melville’s ‘Bartleby the Scrivener’. He specifically questioned whether preference is a more apposite criterion for being morally considerable than pain. Edward Jackson continued the more censorious analysis of Wallace, concluding with an absorbing interpretation of Infinite Jest that highlighted Wallace’s use of Artaud’s ‘cruel aesthetics’, arguing that – despite being auto-critical – Wallace was incapable of thinking outside the hetero-normative male gaze. 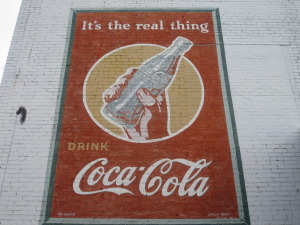 ‘Coca-Cola is often presumed to serve as a synecdochic focal point for anti-capitalist sentiment, but may also represent an ‘anchor to a reality now lost’.’

The third panel centred on Wallace and language, with Dr. Clare Hayes-Brady’s (University College Dublin) comprehensive paper exploring the importance of naming and power in Wallace’s fiction. Noting that naming can be an act of both procreation and subjection, Dr. Hayes-Brady’s paper further emphasised Wallace’s duality rather than adhering to conventional characterisation of Wallace as ‘Saint Dave’. Dr. Simon de Bourcier offered an extremely convincing reading of Wallace’s syntactical strategies, asserting that Wallace’s complex, verbose sentences often correspond to themes of irony, postmodernism and ‘academese’, whereas his simpler sentences often connote sincerity and empathy. Dr. Xavier Marco del Pont (Royal Holloway, University of London) then provided us with his analysis of representations of Coca-Cola in Infinite Jest and Cormac McCarthy’s The Road, highlighting how Coca-Cola is often presumed to serve as a synecdochic focal point for anti-capitalist sentiment, but may also represent an ‘anchor to a reality now lost’. Furthering Dr. Southon’s assertion that we too often avoid critical readings that run contrary to our preconceptions, this paper highlighted how reception should never be static: devoid of our capitalist context, Coca-Cola may have other signification.

The critical focus continued in the final panel – broadly focused on Wallace’s politics – with Joel Roberts’ (University of Brighton) building on Morrissey and Thompson’s recent article on Signifying Rappers in advocating a reassessment of its place within Wallace’s oeuvre. Revealing Wallace’s often problematic relationship with whiteness and race, Roberts argued that Signifying Rappers allows Wallace and Costello to confess their feelings of guilt regarding their subject position as liberal whites. This acknowledgement, however, also ensures that a disassembled white subject can then re-emerge intact. Dr. Daniel Mattingly (Swansea University) sustained this critical look at Wallace’s identity politics, stressing Wallace’s often troubling (to say the least) treatment of women in both his writing and in real life, and calling for further scrutiny to be given to the ‘Wallacean Woman’. Lastly, my own paper also sought to challenge the easy categorization and canonization of Wallace. Highlighting Wallace’s attempts to engage with dialectic reasoning in his writing whilst noting that this method also shared similarities with neoliberal political strategies such as the ‘Third Way’. I argued that Wallace ultimately failed to realize a truly dialogic vision; instead his writing betrays conservative tendencies that are often overlooked by critics seeking to depict Wallace as a left-leaning writer.

The proceedings were concluded by Prof. Geoff Ward (Homerton, Cambridge), who generously gave a considered response to the papers, as well as delighting the audience with hilarious anecdotes of his experience interviewing Mark Costello in a broom cupboard, and of Don DeLillo telephoning the Pynchon household.

Although the panels were each only an hour long, leaving little time for questions after papers had been given, the colloquium proved a stimulating forum for the continuation of Wallace Studies. The papers were of a consistently high standard, and the notable proliferation of scholars willing to resist or question existing critical and theoretical positions on Wallace points to promising new arenas for academic debate. Particularly, in relation to class, gender, and race. Extending my own paper’s emphasis on dialectics within Wallace’s work, the colloquium may have provided the first concerted evidence of a second wave of antithetical Wallace scholarship, suggesting that exciting times lie ahead for the fledgling discipline. Indeed, there may develop something of a split in Wallace Studies, with those who buy into Wallace’s self-professed attempts to write ethically and morally on one hand, and scholars that challenge Wallace’s politics of representation and his representation of politics, on the other.[1] Future Wallace scholars may look back at this colloquium as the event at which the critical horizons of Wallace Studies were expanded.

Iain Williams is a PhD candidate at the University of Edinburgh. His research focuses on David Foster Wallace and how his work engages with notions of sincerity and authenticity. He holds an MA (Hons) in American Studies and an MSc in U.S. Literature, both from Edinburgh. An article on Wallace is forthcoming in the journal Critique: Studies in Contemporary Fiction.
View all posts by Iain Williams →
Tagged  C20, C21, Contemporary Fiction.
Bookmark the permalink.