The Native Studies Research Network is an organisation that brings together scholars of Native American and Indigenous Studies from all over the UK. Each year the Network organises a colloquium at UCL’s Institute of the Americas, while an international conference is held biannually in different locations in Great Britain and Europe. The colloquium is an excellent occasion for PhD students and established researchers to showcase and enjoy the latest research in Native American studies in a friendly and thought-provoking environment.

The papers presented at this year’s colloquium focused on a range of diverse aspects of the study of Native American and Indigenous issues, from literature to history of thought, from art and visual studies to human rights. Thus, it gave a full-rounded picture of the complexity and eclecticism in the current approach to the study of this field. The colloquium, given its nature, is introduced only one panel at a time. This is a feature that I embraced with a sigh of relief, given that the choice of a conference panel can be, at times, a source of excruciating doubts and a fear-of-missing-out. This proved to be an appropriate choice of conference format because audience engagement turned out to be exceptionally good. It was, for example, the first time that I had witnessed an uninterrupted, constructive dialogue between the speakers and the addressees. This is something that – let us not forget –  owes to the high profile of the research presented.

The first panel featured the paper of Paul Whitehouse (Warwick): ‘How the Colonisers Never Left and the Frontier Never closed in Louis Owens’s Uninterrupted Frontier’. Whitehouse analysed the ways in which Louis Owens used the Frontier as a means to explore and cope with particularly thorny issues that marked the history of the American West, especially violence. According to Whitehouse’s interpretation the Frontier in Owens’s novels amounts to an uninterrupted, in-progress process. The author, embracing a Turnerian slant, employed this in such a way that it transcended and sanitized otherwise unacceptable issues of violence and brutality. 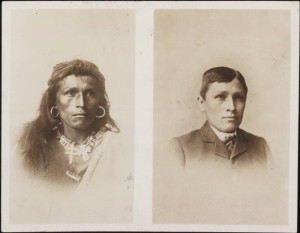 Figure 1: Tom Torlino, before and after enrolment at Carlisle Indian School

The second panellist, Kiron Ward (Sussex), presented on ‘Fictional Encyclopaedism in Leslie Marmon Silko’s Almanac of the Dead’. Ward spoke about the role of Encyclopedias as a tool of European colonial dominance over indigenous Americans. He illustrated the ways in which this concept resonates in Silko’s pages. Representing American reality as an extension of Europe’s, Encyclopaedic knowledge biased the factuality of indigenous experiences. Ward argued, therefore, that Silko’s fiction in Almanac of the Dead  stands as a means to assert survival and resistance in spite of Eurocentric intellectual dominance. Ward’s paper also addressed a recurring theme in modern and early modern representations of the New World: the systematic codification of reality through a European cultural matrix. This spoke strongly to me given my own research on the ways in which Italians perceived the American West. The debate that followed converged to an insightful discussion that emphasised Silko and Owens’s divergent perceptions of frontier violence: ‘horrific nonsense’ VS. ‘frontier as sanitizing myth’. 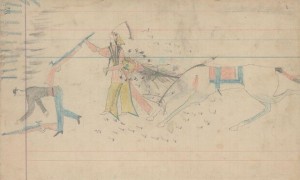 After a vegan-friendly lunch the colloquium resumed with papers from Dr. Jacqueline Fear-Segal (UEA): ‘Representation and Self-Representation: Photographs and Ledger Art from the Carlisle Indian School’ and Dr. Sharon Holm (York): ‘Picture/Writing: Reading Aesthetics, Visualizing the Political through Plains Ledger Art in Native Literature(s)’. Both speakers emphasised the function of Ledger Art (drawings on ledger paper) as an empowering tool that native tribe members employed to re-negotiate their self-representation. Thus, altering or subverting the identity that the colonial  agenda of Indian boarding schools imposed on them. Particularly striking was the contrast, highlighted by Dr. Fear-Segal, between the photographs taken by Carlisle Indian School’s officers, and the Ledger Art representations Carlisle’ students produced. The examples Dr. Fear-Segal provided de-personalized and ‘rubbed’ the students out of their tribal history, while, on the other hand, Ledger art represented an occasion to retrieve and re-evoke ‘lost’ customs and traditions. To an extent they were a redemptive performance with which  they could re-shape and re-dimension their own history. Dr. Holm’s paper focused on the treatment of Ledger Art by Native authors (Gerald Vizenor, Sherman Alexie, Leslie Marmon Silko) and claimed the existence of a particular Native-inflected political aesthetic, which she explored through different approaches including critical theory and post-colonial discourse on Indigenous politics.

The closing panel of the colloquium focused on human rights issues, leaving us with plenty of stimulating food for thought. Andi Bawden’s paper, (PhD student, UEA), entitled ‘Caught in the Middle: Writing about Cherokee Freedpeople in the Twenty-First Century’, addressed the current state of ‘cultural limbo’ in which Cherokee freedmen live today. In particular, Bawden informed us about the conflicting relationship between  them  and a few Cherokee nation members wanting to revoke their citizenship based on race and bloodline. Bawden’s paper also highlighted the issue  of  tackling this topic in academic writing, something that requires both a high degree of tact and sensibility and meticulous preparation. It is true indeed that academic studies help to give visibility to their cause, but it is also true that writing about Cherokee Freedmen without a deep sense of  understanding of their custom and awareness of their condition could cause them more harm than help. 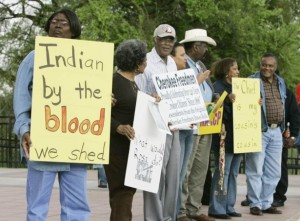 The colloquium came to an end with Robin White’s paper addressing the high-raising rate of violence against Aboriginal women in contemporary Canada: ‘Dehumanizing by Myth: Colonial Construction of Native Womanhood and Canada’s Murdered and Missing Aboriginal Women’. Robin examined different cases of death and disappearance of Aboriginal Women as well as the media coverage they received. He concluded that the cultural implications connected to the latter trace back to  the deep seated sexualization inherent to colonial representations of the ‘Squaw’ figure.  The closing discussion  denoted a limited  awareness of  both topics, even to an audience of specialists. This, though confirming the inadequate visibility of these themes to mainstream research, clearly expressed the need to develop further study in such directions.

Overall, the colloquium proved to be a tremendously inspiring forum for anyone interested in Native Studies. The friendly and informal atmosphere of the event ensured that even a nervous newcomer like me could easily engage in the discussion. For this reason I highly recommend any PhD student and ECR with an interest in Native and Indigenous peoples’ topics to attend next year’s conference at UEA and to join the network by visiting  the page : http://nsrnuk.wordpress.com/. Last but not least, a big thank you to Dr. Jacqueline Fear-Segal and Dr. Rebecca Tillett for their impeccable organization and for kindly inviting me to take part to this awesome event!

Book Review: Presidents and Their Pens: The Story of White House Speechwriters by James C. Humes
Book Review: State of Recovery: The Quest to Restore American Security after 9/11 by Barry Scott Zel...
Review: Transatlantic Women in the Trenches, Transatlantic Literary Women Series
Review: Ecology, Economy, and Cultures of Resistance: Oikoi of the North American World
‘Let Us March On’: Lee Friedlander’s Civil Rights Photography and the Revolutionary Politics of Chi...
Book Review: The Rise of Common-Sense Conservatism: The American Right and the Reinvention of the Sc...
Book Review: Borders of Equality: The NAACP and the Baltimore Civil Rights Struggle, 1914-1970 by Le...
Anglo-American Isolationism: The Case for New Archetypes

Alessandra Magrin Haas is an Early Career Researcher who received her PhD from the University of Strathclyde, Glasgow. Her research interests lie in the history and popular visual culture of the USA and Europe. She serves as an Associate Editor in the NEH-funded project “The Papers of William F. Cody” led by the Buffalo Bill Center of the West in Cody, Wyoming. She has published on Silent Cinema, Buffalo Bill’s Wild West, as well as Transnational Mass-Culture. She is currently editing her first monograph on the Italian reception of the Western genre.
View all posts by Alessandra Magrin →
Tagged  C19, C20, C21, Europe, Native Americans.
Bookmark the permalink.