Conference Review (part one) of BAAS 2015, with Friday Plenary

From 9-12th April the British Association for American Studies (BAAS) held their 60th annual conference at Northumbria University. To ensure the breadth of panels and plenaries were reviewed USSO commissioned three reviewers for the event. This is the first review, which covers friday’s plenary by Sarah Churchwell. (You can read part two here, and part three here).

Now in its 60th year, the annual conference of the British Association for American Studies adopted the theme of ‘Looking Backwards: Looking Forwards’. The diverse range of speakers that I encountered worked to situate their research within the present state of American Studies, to investigate and to challenge historical narrative, and to look forward to the future possibilities that their work suggested. I attended panels too numerous to detail fully here, and encountered nothing but rich and exciting research at every turn. So rich and exciting in fact that I now realised I sidestepped the single panel I was intent on attending. Coming from an English Literature background I am a relative newcomer to the inner workings of American Studies, and what really struck me over the four days was the multifaceted nature not only of the subject matter under discussion, but the range of critical approaches and the variety that characterises the discipline. An underlying question and linchpin of the event was of course the complex notion of ‘Americanness’ which was addressed and challenged in numerous ways. 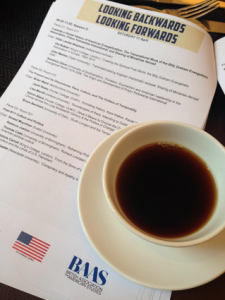 Coffee. Programme. No need to go outside.
(Credit: Matthew Shaw)

The three speakers on the panel ‘Capitalist Crises’ explored the tenets of capitalism from three distinct points within the second half of the twentieth century. Sarah Cullen’s (Newcastle University) paper reimagined nuclear war through games, by focusing on the role of baseball in relation to the Cold War in Robert Coover’s The Public Burning. She performed an intriguing characterisation of baseball as a fixture of US culture that spreads in a more insipid way than other cultural exports. Sarah Daw’s (Exeter University) study of US capitalism focused on Mary McCarthy’s Birds of America, drawing on the work of French philosopher Simone Weil as well as McCarthy’s non-fiction writings on the Vietnam War. She discussed notions of force as situated in the nonhuman world, and she approached the US – Vietnam conflict through the lens of consumer waste, focusing on the role of waste in McCarthy’s text as characteristically American, opposed to the non-human world and indigestible by the landscape. Daniel Mattingly (Swansea University) then addressed contemporary questions of societal structure through his study of Dave Eggers’ The Circle. He investigated varying depictions of societal connections as a network, a circle, and a lattice in Eggers’ earlier work A Heartbreaking Work of Staggering Genius. His particular focus concerned the use of McHale’s term ‘post postmodernism’ in characterising a society shaped by these new formulations. All three papers performed a rich analysis of their subject matter from an unusual perspective, and the question and answer session provoked Daw to flesh out her conceptions of the human and nonhuman world, and the problematic status of the term ‘nature’. Daniel was also led to discuss the ethics of sincerity in post-postmodern fiction, as well as the tension between the notion of the individual and the communal.

‘Rethinking David Foster Wallace’ saw four vividly engaging papers from five Wallace scholars dubbed ‘the new boyband of BAAS 2015’ (thanks must go to Iain Williams for coining the term). But the content of the afternoon was far from a revival of the greatest hits, as the speakers were linked by an awareness of the need to re-see the contemporary status of the author. The first paper was a fruitful collaboration between Joel Roberts (Brighton University) and Edward Jackson (University of Birmingham). 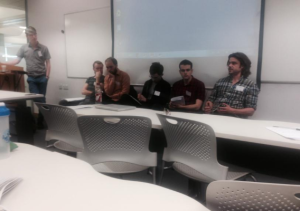 In questioning the relationship between suffering and identity in Infinite Jest, they asserted the role of affectlessness in Wallace’s work, and probed the disparity between his fiction and nonfiction writings. They identified the presence in his fiction of a problematic prioritising of whiteness and masculinity. Iain Williams (University of Edinburgh) similarly raised the problem of an assumed homogeneity within Wallace’s work in his investigation of the author’s engagement with the fin de siècle philosopher William James and the themes of his 1907 work A Pluralistic Universe. Mark West (Glasgow University) explored The Pale King in terms of collective experience and focused on the Seventies, characterising the decade in terms of notions of surveillance and self-surveillance. He engaged with varying portrayals of the decade as a break and a bridge, as well as its own nostalgia for a superficial version of the 1950s. Stuart Taylor (Glasgow University) considered Wallace’s engagement with mathematics, tracing the influence of Newton and Wittgenstein and arguing that the latter’s influence upon Wallace’s work requires greater attention than previously considered. He also explored Wallace’s signature interest in the visual in terms of his use of mixed media, including the inclusion of mathematical and formal logic in his texts.

Turning to the Friday plenary, Sarah Churchwell’s talk was a part of a longstanding project investigating The Great Gatsby. She set out a number of findings from her thorough research into the era and context of the novel’s creation and reception, which she described as ‘treasure hunting for traces’. Her presentation encountered ideas of Fitzgerald as a figure characterised in the press by failure and immaturity. Churchwell drilled down into assumptions about the signification of the narrative, particularly in a fascinating explication of the role of the green light in the novel, and the meaning that this would have held to Fitzgerald’s contemporary audience. In her research, Sarah strives to derive a ‘usable past’, and elsewhere I encountered a critical eye on the past that did not shy from challenging historical narrative. 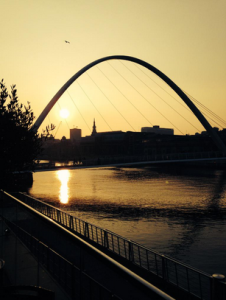 Newcastle: A beautiful backdrop and a consistent proximity to bridges.
(Credit: Iain Williams)

After Saturday’s mid-morning tea and coffee break was the, ‘Women, Gender and Knowledge Construction in U.S. history’ panel. It was a fascinating investigation into the relationship between female political figures, the press, and the archive. Together, speakers Kate Dossett and Say Burgin (both from Leeds University) provided a captivating insight into the gendering of the US historical narrative. They closely studied the work of Eleanor Roosevelt and her role as First Lady, and the women of the women’s liberation movement and the problematic legacy of suffrage. Within the broad range of subjects that I encountered, I was drawn to research that made use of work from different disciplines, and the ‘Visions of America’ panel was an enjoyable excursion into the realm of visual art. The first paper by Lyndsay Miller (University of Nottingham) was an effective pairing of Nabokov’s Lolita with David Lynch’s Twin Peaks. She investigated the two dystopic visions of America in terms of the role of moral judgement. She argued that the two are linked in the way they characterise moral judgement as an imaginative act on the part of the reader/viewer. Laura MacDonald’s (Portsmouth University) paper was an engaging exploration of the musical Man of La Mancha in, and its evocation of, unrealised promise, the dream deferred, and the implications of its enduring popularity in terms of the connection between fantasy and the US consumer. Joe Morton (University of Manchester), whose research centres on the history, literature, and aesthetic of Southern California, took a fascinating look at the specifically Californian dream in terms of the region’s cultural history and distinctive aesthetic, by exploring different modes of representation and their interconnectedness.

Given my interest in visual art I was intrigued by the panels that enabled dialogue between different art forms,. This was precisely the intention of the ‘Objects in Narrative’ panel organised by the research caucus SAVAnT (Scholars of American Visual Art and Text), which seeks to bridge the gap between American Studies and Art History. The panel looked at filmic, literary, and art objects and the makers of those objects. Joanna Pawlik (University of Sussex) presented her research on Charles Henri Ford’s postcard series, performing close study of the objects themselves with reference to Queer theory, and investigating the artist’s anachronistic relationship with the Surrealist movement. Kristen Treen (Cambridge University) conducted a close and thorough analysis of the 19th century painting ‘The Return to Fredericksburg After the Battle’ by David English Henderson. Stephanie Lewthwaite (University of Nottingham) investigated memory and migration trails in contemporary Latino and Latina art, and Doug Haynes (University of Sussex) explored the evocative and sometimes bewildering signification of a number Jeff Koons’s art objects.

My first BAAS conference saw my introduction to a warm and welcoming community, a wealth of fascinating research, and a refreshing fostering of dialogue between disciplines. But for a brief excursion due to the fire alarm I barely made it outside the building throughout the long weekend. My only regret was being unable to attend the closing events of Sunday morning, as I unfortunately had prior commitments and an early train to catch. The diversity of critical approaches and the range of visual and textual objects under study have provided food for thought on the nature of my own research, and the ideas expressed throughout the varied panels resonate with my own work in sometimes surprising ways. My thanks are due to Northumbria University and particularly to the sterling efforts of Joe Street in organizing such a successful and immensely enjoyable conference, that has galvanised my own enthusiasm as a British scholar of American fiction.

Book Review: Massive Resistance and Southern Womanhood by Rebecca Brückmann
Review: American Politics Group Conference
Review: Borders vs. Bridges: Nationalism and Transnationalism in the Americas
Book Review: Melville in his Own Time edited by Steven Olsen-Smith
Book Review: This Nonviolent Stuff’ll Get You Killed: How Guns Made the Civil Rights Movement Possib...
Book Review: The End of Ambition: The United States and the Third World in the Vietnam Era by Mark A...
Book Review: New Literary Portraits of the American West: Contemporary Nevada Fiction by David Rio
Book Review: A War for the Soul of America: A History of the Culture Wars by Andrew Hartman

Rebecca Harding is currently undertaking doctoral research at the University of Sussex. Her thesis focuses on Don DeLillo and works to re-read the author with a focus on the body and the role of affect in his fiction. She holds an MA in English Studies from the University of Sussex and a BA in Music and English from Anglia Ruskin University.
View all posts by Rebecca Harding →
Tagged  BAAS, C19, C20, C21, Contemporary Fiction, Cultural History, Gender and Sexuality, Politics, Popular Culture, Visual Culture, Women's Writing.
Bookmark the permalink.