From 9-12th April the British Association for American Studies (BAAS) held their 60th annual conference at Northumbria University. To ensure the breadth of panels and plenaries were reviewed U.S. Studies Online commissioned three reviewers for the event. This is the second review, which covers Saturday’s plenary by Dana Nelson. (You can read part one here and part three here).

As many of the delegates agreed, it was a pleasure to see so many panels at BAAS 2015 that centred on nineteenth century American literature and culture. In part this increase is due to the community developed through BrANCA, the British Association for Nineteenth Century America, which sponsored two panels.

The first of these was ‘Nineteenth Century Orientations’ on Friday morning, which started with an innovative video essay from Dominic Jaeckle (Goldsmiths, University of London). Dominic’s work brought together black and white video with recorded narrative to explore the relationship between Emerson, the self, writing, and photography. Bridget Bennett (University of Leeds) delivered a persuasive account of reading the home in The Wizard of Oz (1900) as rooted in financial crises of the late 1800s. The preoccupation with debt and financial instability, Bridget argued, is apparent in many genres of literature, such as Frank Baum’s fantasy, not just in realism, as previously argued. Hannah Murray (University of Nottingham) used Charles Brockden Brown’s Wieland (1798) to explore liminal whiteness in antebellum fiction, arguing for the presence of inexplicable voices disrupting ideals of white citizenship in canonical works. Questions drew together the papers on how voice and language operate in these texts and the concept of the home. 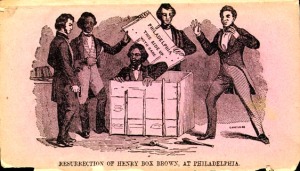 ‘Narrative of the Life of Henry Box Brown’. Credit: Documenting the American South, University of North Carolina at http://docsouth.unc.edu.

Later on Friday morning I attended ‘Race and Performance in Nineteenth Century America’. Luke Devlin (University of Edinburgh) presented on the African Grove Theatre (1821-3), the first African-American theatre in the nation, contending that cast and playwrights engaged in a political act of staging and in its short existence changed how the American public thought about the theatre. In her paper, Hannah-Rose Murray (University of Nottingham) asked why some African-American former slaves were treated as celebrities in mid-1800s Britain. Through Frederick Douglass, Henry Box Brown, William and Ellen Craft and Josiah Henson, she traced several reasons why British audiences were attracted to abolitionist speakers and performers. Closing the panel, Jack Noe (University of Leeds) examined how Southerners responded to the centennial celebrations of independence at the 1876 Philadelphia Exposition. Southerners were aware of being outsiders in these celebrations, and their visits and reactions to the Exposition reinforced their regional identity. Panellists received questions on the connections between representation, racial identity and performance, and the reactions to these performances.

‘Nineteenth-Century American Literature’, during Friday’s third session, brought together papers on Herman Melville and Upton Sinclair. Jimmy Packham (University of Bristol), examined how cacophonous narrative voices carefully construct the image of a passive writer in Melville’s Battle Pieces (1866). This Civil War poetry collection deliberately eschews literary convention in order to reflect the disruption of national violence. Staying with Melville, Alex McDonnell (Durham University) argued that The Confidence Man (1857) uses the figure of the Indian hater as a satirical burlesque to attack national narratives that legitimated Indian removal as part of ‘civilizational progress’. Although focussing on 1920s texts, Steven Bembridge (University of East Anglia) traced the development of nineteenth century evangelical and liberal protestant ideologies in Sinclair’s speculative novels They Call Me Carpenter (1922) and The Millennium (1924). The audience asked how these ‘two Melvilles’ from 1857 and 1866 might speak to one another, and many delegates offered up other turn-of-the-century writers and thinkers that could feature in Steven’s work. 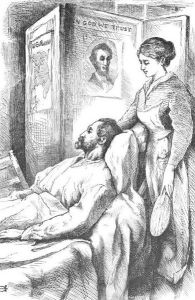 Saturday kicked off with a four-paper panel ‘Fictional Legacies of the Civil War’, with speakers spanning a number of countries. Irina B. Arkhangelskaya (Lobachevksy State, Nizhni Novgorod) provided an overview of Southern Agrarian portrayals of the Civil War and suggested that Margaret Mitchell diverges from this tradition—and therefore crafts a more successful novel—by placing importance on emotion and character in Gone With The Wind (1939). Nicholas Stangherlin (Ca’Foscari, Venice) traced the influence of the Civil War on Twain’s A Connecticut Yankee in King Arthur’s Court (1889). Through his time-travelling narrative Twain questions the perceived progress achieved in a Northern victory, and asks if these national potentials have been fulfilled. Kyle Shook (Adam Mickiewicz, Poznan) argued how Whitman’s Specimen Days (1882) and Alcott’s Hospital Sketches (1863) reclaimed the idea of a ‘good death’ amongst the trauma of military violence, by attempting to remove the horror of a battlefield death through sentimentalism and acting as surrogate relatives to dying soldiers. Finally, Ayesha Siddiqua (Durham University) took a law and literature approach to Harriet Jacobs’ Incidents in the Life of Slave Girl (1861). She argued that the conflict between Jacobs’ self-identity and her social and legal status drives the narrative, and why it remains a pertinent text today in regards to the legitimacy of black lives. Questions included topics such as the female body as a lens for historic events, the idea of Americans needing to place order onto chaos, and concluded with a lively conversation on Mitchell’s place within the canon.

‘Race in Nineteenth-Century Literature’ featured papers that connected the nineteenth and early twentieth centuries together through concerns of racial violence. Nadine Allan-Vaught (University of South Florida) presented Ida B. Wells-Barnett’s The Red Record (1895) and Claude McKay’s ‘If We Must Die’ (1919) within a context of communist uprisings and a development of African-American political consciousness. Michelle Coghlan (University of Manchester) argued for an ‘insurgent memory’ of the 1871 Paris Commune present in white and black radicalism in the Gilded Age. The Commune was resurrected in leftist literary culture and this firmly placed American groups within radical internationalism. Finally, Jonathan Sudholt (Brandeis University) examined the role of sympathy and readers’ good intentions in Charles Chesnutt’s The Marrow of Tradition (1901), exploring Chesnutt’s claim that race relations can only improve once white ignorance towards the other side of the colour line is remedied. Questions in part continued these earlier discussions from the morning, with delegates asking how these texts might speak to continuing problems of police brutality against African Americans and the recent #blacklivesmatter movement.

On the third evening of BAAS 2015 we were treated to an eloquent and passionate plenary from Professor Dana Nelson (Vanderbilt University). Best known for her work on race in the nineteenth century (The Word in Black and White, National Manhood), Dana’s lecture ‘A Passion for Democracy: Proximity to Power and the Sovereign Immunity Test’, drew from her most recent work Bad for Democracy (2008), an exploration of the Presidential office’s unitary power. Updating her work with an Obama postscript, Dana argued that Presidentialism works against the idea of democracy as belonging to the people and a civic responsibility. Instead, the public increasingly directs its desires for change towards the President; they want to give him more power. Opportunities for civic democratic involvement have been ‘tamped down’ since the Constitution, Dana claimed, but she drew particular attention to how the executive branch of government has overshadowed the judicial and legislative branches since the Reagan administration. Most notably, the George W. Bush doctrine was entirely predicated on unilateral power and believing the President to be above the law, an ideology summed up by Karl Rove who told journalists, ‘We’re history’s actors…and you, all of you, will be left to just study what we do’ (2004). 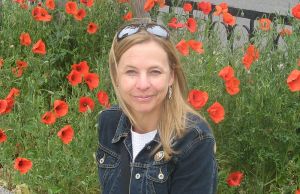 ‘Dana made a strong case that this is not about partisan politics, and it does matter even when it’s ‘our guy’ in charge.’

Turning to the Obama presidency, Dana bemoaned the lack of critical scholarship or journalism that has sought to examine his unitary power. She views intellectuals as taking a ‘goldilocks’ approach to executive power, that they see Obama’s wielding of these controls as ‘just right’. Yes, Obama may have signed less executive statements but he has exercised his authority in other means. The administration claims to have the toughest transparency rules in the history of the office, but is committed to secrecy over issues such as Guantanamo Bay. Dana pointed to a peculiar kind of doublespeak at work regarding foreign military action: the President must seek approval from Congress to engage in ‘hostilities’, but ‘hostilities’ are defined as involving American casualties, and so military campaigns that do not involve boots on the ground, even though they involve attacks on other sovereign nations, evade this congressional check. Despite often pledging to limit unitary power, presidents continue to legitimise its growth and immunity from legal action against them, including Obama who stated, ‘things look different on this side of the desk’.

Dana made a strong case that this is not about partisan politics, and it does matter even when it’s ‘our guy’ in charge. Americans need to take this loss of democracy seriously as it is not a problem that can be remedied by the President themself, who will always mandate further executive powers. Democracy is about disunity and disagreement; it is not just institutionalised but based in everyday conversations between citizens. Dana’s forthcoming work traces the growth and decline of these civic discussions and debates in the long nineteenth century. When asked if it’s possible to be optimistic about this, Dana claimed that Americans can engage in a process of self-governance if they become less enchanted with the President (especially in popular culture) and have somewhere to put their democratic energy. Dana’s plenary offered valuable thoughts on the most powerful office in the world and what it means to be a citizen in a democratic country. These issues of power and community are pertinent not just to future American elections, but also, in regards to the imminent General Election, how citizens in the UK may engage in civic democratic practices.

Fresh after the BAAS disco, the second BrANCA-sponsored session ‘Infrastructures of Culture’ was amongst the final panels of the conference. Katie McGettigan (University of Nottingham) presented how British publishers redistributed the works of American authors—such as Irving, Cooper and Emerson—through Publishers Series, deliberately composed collections of British, European and American literature. These collections constructed and negotiated transatlantic culture, which was both a material and an imaginative process of exchange and circulation. Albeit a solo paper panel, Katie’s talk generated a number of questions on authorial voice and control, copyright and canon building.

Considering these six panels altogether, it was fantastic to see over three days a range of approaches to nineteenth-century (and early twentieth-century) literature from a large number of UK and international scholars. The questions and discussions following panels were valuable in thinking about how we may relate nineteenth-century texts to the contemporary moment. Hopefully these discussions can be continued at future events such as the BrANCA Symposium at Warwick in November.