Conference Review: ‘Not Your Average Superhero’

‘Not Your Average Superhero’

‘Is Hollywood overdoing it when it comes to superheroes?’ asks Edward Helmore in a recent piece in The Guardian. The thirty superhero movies set for release over the next five years suggests that they are. Despite the ‘superhero ennui’ that Helmore detects among film critics, however, the fact remains that audiences are as hungry as ever for caped vigilantes.  ‘Not Your Average Superhero,’ a recent panel of talks at the University of Birmingham, organized by the Contemporary Fiction Seminar, engaged with a resulting quandary – if superheroes are now abundant enough to register in some sense as average, then how do we define their apparent ‘super-ness’?

The three panellists, Zara Dinnen, Tony Venezia and Daniel Rourke, set out to  explore superheroics not on the cinema screen, but behind the keyboard, in the literary novel, and in relation to digital technologies. These may not be the traditional preserves of Superman and co., but then that is the point. For all three speakers the superhero performs cultural work in arenas that, though respectful and often nostalgic for the figure’s import in comics, indicate how its meaning continues to mutate in response to new environments.

Dinnen began by appearing to ‘hack’ into her presentation, using hackertyper.com to establish her focus on the hacker as a performative identity. Drawing upon Lori Emerson’s notion of ‘the spectre of expertise,’ Dinnen argued that hackers’ super-ness derives from the specialised knowledge they represent to laypeople. She illustrated this with the comic Hacktivist, which depicts hackers in the post-Snowden garb of brains-over-brawn freedom fighters.  Venezia’s paper (read by Dr Matthew Sangster) followed Dinnen’s strong focus on comics, albeit by positioning comic book readers themselves in the heroic frame. Spotlighting Michael Chabon, Jonathan Lethem and Junot Diaz as ‘comic book guys,’ Venezia suggested that these novelists have helped spearhead a rehabilitation of the ‘fan.’ Long derided for their apparent lack of critical distance, fans for Venezia are enjoying a new legitimation, whether as cultural producers like filmmaker Joss Wheedon or as sources of academic enquiry. Rourke picked up this emphasis on spaces outside of the superhero comic with his look at the ‘Phantom Zone’; a jailhouse in Superman lore for the enemies of Krypton, which often threatened to burst loose. Reading this zone as an apt metaphor for the interstices of digital technology, Rourke explored the phantom post-human spaces of green screen and glitch art.

Doubleness was as a key motif across all three papers. It was appropriate considering the superhero’s indeterminacy as a figure that traverses various boundaries between masked and unmasked, or the human and superhuman. Dinnen explored how Hacktivist’s ‘superalterns’, (Christopher Kelty’s play on Spivak’s subaltern), Ed and Nate, head the social media empire ‘YourLife.’ However, they also help to ‘empower’ Arab Spring protest movements through their leadership of the shadowy hacker group ‘save_Urs3lf.’ Meanwhile, Venezia’s reading of Diaz, Lethem, and Chabon as straddling divides between fans and creators was indicative of his wider argument that fandom is a fundamentally productive activity. This emphasis on the mechanics that lie behind cultural production emerged in Rourke’s focus on glitch art and datamoshing, whereby artists manipulate video codexes to forefront the digital’s materiality, thus allowing the Phantom Zone to appear in destabilizing ways. There was another potential cross-over here with Dinnen’s argument concerning how spectres of expertise mystify the digital, eliding its material production. Following up these concerns would no doubt involve political questions. For example, are Hacktivist and datamoshers helping to unveil the digital’s ostensible seamlessness, alerting us to the tangible processes involved in creating its oft-purported intangibility? 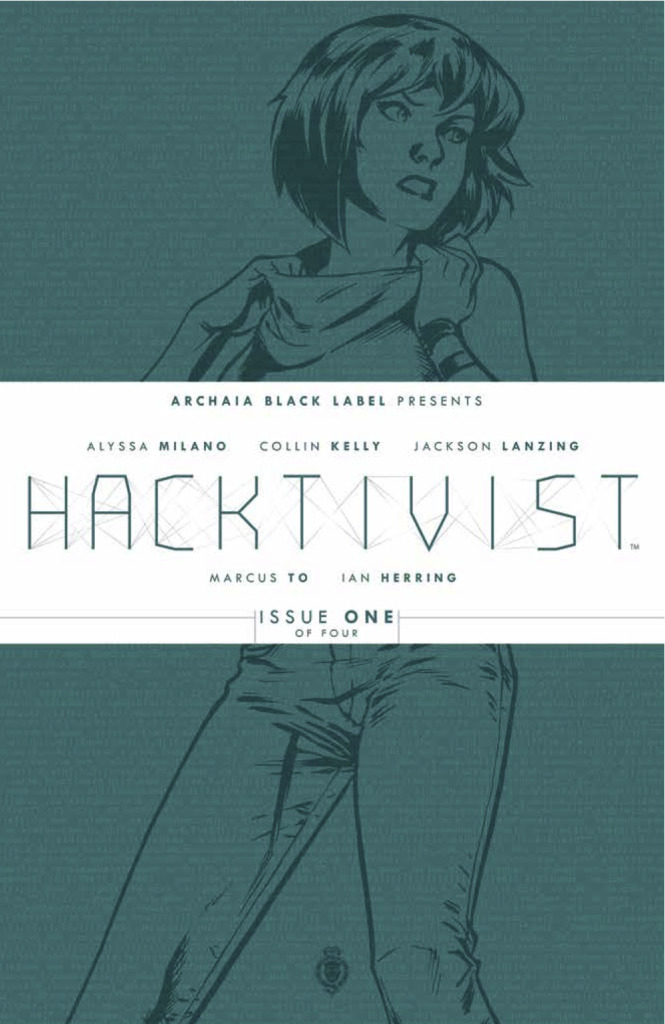 As Rourke demonstrated through reference to the teaser trailer for 2013’s Man of Steel , we are in fact quite used to seeing images of the digital miasma. This does not though dilute the importance of remaining aware of digital culture’s material underpinnings. As Dinnen noted in response to the first question of the Q&A, Hacktivist gives no explanation of the infrastructural hardware that Ed and Nate’s expert manipulation of software and code presupposes. The comic is  therefore complicit in ideas of the hacker’s unreachable expertise. A second questioner pointed out, however, that recent attempts to introduce coding into schools might help break down such barriers, opening the superheroic activities of a technological elite to the public. Another attendee also observed that the Phantom Zone predates digital culture. This led to a general consideration that no matter which metaphors are used for the digital,  it will still evade and challenge representation. Matthew Sangster picked up on this with a query regarding the superhero itself – does Hacktivist, novels by comic book guys, and the work of digital artists thus suggest our inability to move past superhero figures? This larger question of why we remain so invested in those with extra-ordinary abilities remained open. Dinnen and Rourke did note, however, that Hacktivist may be indicative of how non-superhero comics cannot help but work within and against the superhero genre, which has overwhelmingly defined the medium in popular consciousness.

The panel closed over wine, Pringles and, perhaps more importantly, stimulating discussion. If Helmore is right, and superheroes now saturate popular culture, Dinnen, Venezia, and Rourke’s papers demonstrated the important critical work to be done in investigating how superheroic tropes percolate through a variety of discourses and media.

The Contemporary Fiction Seminar held between University of Birmingham and Birkbeck, University of London, offers a dynamic and singular venue for discussing such topics. Previous sessions have covered post-feminism and Hollywood, gaming cultures, and the works of Bruno Latour. ‘Not Your Average Superhero’ was a fascinating addition to the seminar’s already impressive programme, which in its adventurous scope and speaker expertise continues to go from strength to strength.

Emerson, Lori, “The Net Has Never Been Neutral”. Triple Canopy (to be published). http://www.canopycanopycanopy.com

Review of 25th Annual Conference of American Literature Association 2014
"Be broad, be bold and be aware": Review of the 2014 HOTCUS Postgraduate and Early Career Researcher...
Review: 'The Historical "Dispute of the New World": European Historians of the United States and Eur...
From Trinity to Trump: The Politics of Nuclear Memory in the 2020 Election
Storify of our #bookhour twitter chat on EUPHORIA by Lily King
My Research: Juliet Williams
R&B entertainers didn't take too long to get involved in the civil rights movement
60 Second with Sage Goodwin