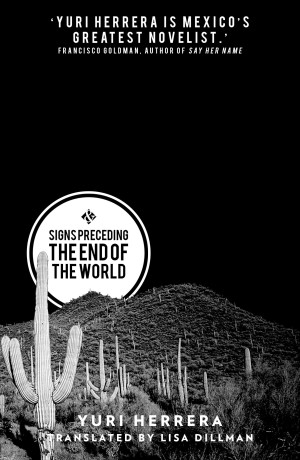 February’s #bookhour marked the first of Twitter chat of 2016. Donna Alexander hosted a discussion of Signs Preceding the End of the World by Yuri Herrera, translated by Lisa Dillman. She was joined by Dr Francisca Sánchez Ortiz, Dr Laura Smith, and Lisa Dillman. They considered a range of issues including, the myth of emptiness, the allegory of the underworld and how this worked with Mesoamerican mythologies alluded to by Herrera. They also discussed the role of nature, the representation of cultural hybridity, and how the novella engages with the notion of global cities. Developing out of this is a discussion of the significance of location and language in Herrera’s work and how these issues effected Dillman’s approach to translation. The panellists also shared examples of other works of Mexican and Mexican American literature that engage with the border in similar ways to Herrera, sharing ideas from their research and teaching portfolios. Check out the storify below to catch up on the chat.

Q1. In what ways does SIGNS comment on a myth of emptiness? (Laura Smith)

Q2. How is the allegory of the underworld explored in the novel? (Laura Smith)

Q3. Are other current writers changing the landscape of how the reading public views border life and/or Mexican & Chican@ ID? How? (Lisa Dillman)

Q4. In SIGNS (and other of Yuri’s texts), there is a current of ecological concern. How you read the role or roles you see nature playing? (Lisa Dillman)

Q5. How does the book represent cultural hybridity and change in migrant communities? (Francisca Sanchez Ortiz)

Q6. How does the book engage with the concept of the global city on both sides of the border? (Francisca Sanchez Ortiz)

Lisa M. Dillman teaches at Emory University in Atlanta. She has translated fifteen novels, by writers including Sabina Berman, Víctor del Árbol, Eugenio Cambaceres, Eduardo Halfon, and Andrés Barba. Dillman is the translator of Signs Preceding the End of the World, and her translation of Yuri Herrera’s The Transmigration of Bodies is forthcoming from And Other Stories.

Francisca Sanchez Ortiz is a lecturer in Spanish Studies at Manchester Metropolitan University. Her research interests are border theory, representations of systemic and/or gender violence particularly in the Mexican American border.

Laura Smith is Lecturer in Human Geography at the University of Exeter. She is currently researching how literature (especially nature and natural history writing) can contribute to ecological restoration debates, examining the link between literature and ecological reform, and how literary expression influences ecological and political action.

Selling Houses to Buy a Dream: White Diaspora and the Suburbs in Richard Ford's Bascombe Trilogy
Storify of #bookhour chat on BLACK DOVE: MAMA, MI'JO AND ME by Ana Castillo
Teaching U.S Women’s History in British Universities: a Personal and Political History
The U.S: A Society Without Classes? Conference Review of “How Class Works”
Sound, The Second-Line, and the Politics of Post-Katrina Memory
The Indentured Atlantic: Bound Servitude and the Literature of American Colonization (Part Two)
Conference Review: 'Protest: Resistance and Dissent in America'
Mending Fences: The Broken Bond between Theatre and Film