Book Review: What Were We Thinking: A Brief Intellectual History of the Trump Era By Carlos Lozada

Even before Donald Trump’s election as pr 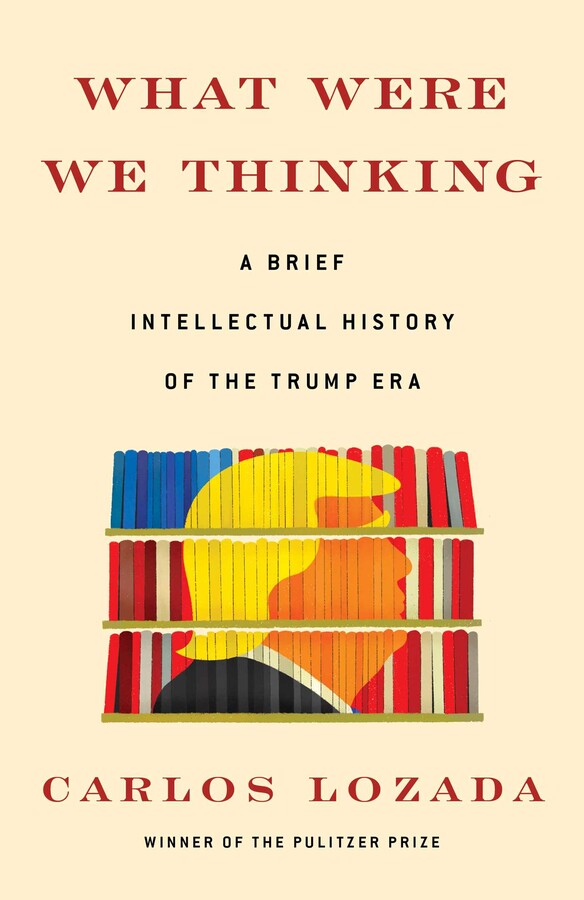 esident in 2016, numerous books began to appear that attempted to diagnose the Trump phenomenon and situate it in relation to American politics and culture. Throughout Trump’s disastrous term as president, Trump-themed books were released at a relentless pace, and even more are sure to follow in the coming years now that he has been voted out of office. While many of these books are compelling and illuminating, the weakest ones have been those that have attempted to boil Trump’s dismaying victory down to some simple monocausal answer.

With these factors in mind, I was intrigued by Carlos Lozada’s book What Were We Thinking: A Brief Intellectual History of the Trump Era (2020), which provides an overview of some 150 recent books that have been written about the Trump phenomenon ranging from 2016 through to 2020. A Pulitzer Prize-winning journalist and book critic for the Washington Post, Lozada immigrated to America from Peru, an experience that surely enhances his appreciation of the ills of Trump’s divisive nativist rhetoric, which some economic-focused Trumpism accounts have tended to either downplay or overlook.

In essence, Lozada positions himself as somewhat of an outlier to American sociopolitics who is curious to consider various informed perspectives on Trumpism, regardless of where such accounts are positioned on the political spectrum. Accordingly, what I appreciate most about Lozada’s book is how he hits the nail on the head with respect to the widespread media debates over whether Trump’s support emanated from racial or economic anxieties. There is ample evidence to indicate that economic and racial anxieties were intertwined when it came to the predominantly white voters who supported Trump in 2016. Lozada, however, never sufficiently follows up on this matter, which is unfortunate given that numerous books have revealed that many of Trump’s 2016 white working-class supporters were employed in ‘old economy’-style jobs that faced the prospect of declining wages due to so-called ‘legal’ and ‘illegal’ immigration alike.

The fault here is not that of the immigrants, regardless of whether they be deemed ‘legal’ or otherwise, but rather the reigning neoliberal system in place that economically exploits lower-tier workers. This is a vital matter that needs to be addressed, though Lozada never truly engages with it. Shockingly, he says nothing of this issue in his chapter on border issues, ‘Beyond the Wall,’ even though various books have explored how many Trump 2016 voters registered cultural-racial anxieties about immigration that were conflated with economic concerns. Although Lozada engages with an array of books about the Trump phenomenon, he does not mention sociologist John L. Campbell’s data-driven book American Discontent: The Rise of Donald Trump and the Decline of the Golden Age (2018), which reveals that ‘those most likely to support’ Trump ‘were [white] people with less than a high school education; reporting ancestry as simply “American”; living in a mobile home; [and] working in “old economy” jobs like agriculture, construction, manufacturing, and trade…’ (Campbell 144).

Lozada also seems to have missed progressive journalist John B. Judis’s The Populist Explosion (2016) and Judis’s engaging, but misleadingly titled, The Nationalist Revival: Trade, Immigration, and the Revolt Against Globalization (2018), which together examine how conflated economic concerns and cultural-racial anxieties have propelled Trumpism. As Judis outlines in The Populist Explosion, there are entire ‘old economy’ American employment areas — historically occupied by the white working class — which have seen wages pulled down due to the blatant exploitation of so-called ‘legal’ and ‘illegal’ immigrants alike (42).

With specific regard to racial-ethnic matters, Lozada’s chapter ‘See Some I.D.’ provides a detailed overview of books on this matter, which includes analyses of Kwame Anthony Appiah’s The Lies That Bind: Rethinking Identity (2018), Wesley Yang’s The Souls of Yellow Folk (2018), and Patrisse Khan-Cullors’s When They Call You a Terrorist: A Black Lives Matter Memoir (2017). Lozada also provides a compelling critical interrogation of Robin DiAngelo’s bestseller White Fragility: Why It’s So Hard for White People to Talk About Racism (2018). Succinctly summarising the book’s argument, Lozada notes how ‘White Fragility reads like a pharmaceutical ad for treating whiteness’ (137).

Lozada also features a significant chapter, ‘Him Too,’ in which he meditates on how Trumpian politics have both intersected with and influenced the ‘Me Too’ era. This has been a neglected area of focus amongst Trump’s critics, who have tended to concentrate more on economic and racial issues. As Lozada points out, there is something deeply disturbing about a nation that has elected a president who has repeatedly made so many unabashedly misogynistic claims in public (148). Many of the books that Lozada discusses here are definitely worth reading, in particular Hillary Clinton’s What Happened (2017) and Kate Manne’s Down Girl: The Logic of Misogyny (2018). And yet, if there is a weakness in this chapter, it stems from the fact that Lozada never fully acknowledges the sobering reality that some 53 percent of white female voters supported Trump in 2016 (Campbell 145), which points towards a troubling racial-gender conflation that he fails to explore.

Though one would be a fool to deny the reactionary white backlash currents that Trump tapped into in order to secure his 2016 victory, Lozada makes clear that there were many factors that led to Trump being elected president. In this respect, What Were We Thinking is surely one of the smarter critical explorations of Trumpism to be recently released. Amazingly, however, Lozada seems unaware of the true insightfulness of his project, as he never seems to directly conceptualise what he is doing throughout his book, which is avoiding glib monocausal explanations of Trumpism in favor of engaging with complexity analysis via his diverse readings. In essence, his book’s strength resides in its innovative approach, its weakness resides in Lozada’s apparent failure to fully conceptualise what he is doing, and its missed opportunity lies within complexity theory, which Lozada could have invoked as a sort of informal theoretical assemblage to enrich his otherwise engaging project.

Campbell, John L. American Discontent: The Rise of Donald Trump and the Decline of

Judis, John B. The Nationalist Revival: Trade, Immigration, and the Revolt Against

—. The Populist Explosion: How the Great Recession Transformed American