Book Review: West of the American Revolution: An Uncommon History of 1776 by Claudio Saunt 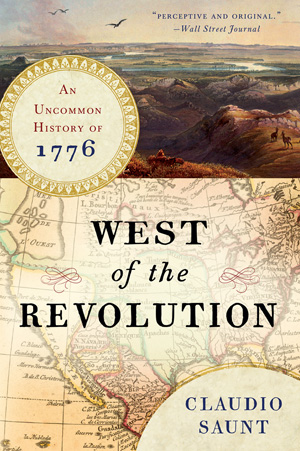 A myriad of research and studies concerning colonial and revolutionary America have examined multiple themes and categories, whether religious, political, or economic. Claudio Saunt, in his work, West of the Revolution: An Uncommon History of 1776 shifts the focus beyond the British colonies to the remaining North American continent and demonstrates the vast and extraordinary history. Saunt’s primary critique of the existing literature is that, ‘We frequent Boston’s taverns and churches, follow the Continental Army down New Jersey’s rutted dirt roads, and take up residence in revolutionary Williamsburg, rarely straying for than a few hundred miles from the Atlantic Coast.’ (16) Saunt then takes the reader on an eastward and uncommon journey from Alaska to the Deep South proving that much of our understanding concerning the events and experiences throughout North America during this period is neglected and deserves to be explored.

This book’s greatest strength is that it challenges the reader to open their minds to the larger struggle for the greater American continent. 1776 was a year of great civil war between the British Colonies and their motherland; however, equally important was the struggle of the Native American and First Nations people against the ever-expanding and exploring Europeans.

West of the American Revolution surveys nine different places and a number of diverse cultures including Native Americans such as the Aleuts, Miwoks, Lakota, and Creeks, to the first nations such as the Cree, along with the Europeans, which consists mainly of the Russians, Spanish, French, and British. This book is comprised of eight chapters divided evenly between two sections: ‘The Russians are Coming’ and ‘The Continental Divide’. In the first part, Saunt explores how ‘The Russians are Coming’ by linking the relationship between the Aleuts and Russians in Alaska to the relationship between Spain and Russia. Furthermore, he provides insight into the purposes for the Spanish in creating the San Diego and San Francisco colonies, which later promotes Spanish exploration into the Colorado Plateau. In the second part, Saunt details ‘The Continental Divide’ through the expansion of the British enterprise in Canada, how the Lakota sought to protect the sacred Black Hills from this expansion, and lays out the successes for the Osage in the Ohio Valley as opposed to the failures for the Creek in the Deep South.

The detail that Saunt provides in the background leading up to the specific events in 1776 is fascinating. He does not assume that the reader knows the cultures or people of whose history he is sharing. He accomplishes this by briefly sharing glimpses of their greater story to better comprehend the specific events or circumstances being told. For example, he describes the Lakota’s movement to the Black Hills and the sacred place they become to the Lakota. Equally intriguing is Saunt’s proficient examination and interpretation of the sources in diverse languages, and in a unique manner in which he tied them together. Furthermore, he provides a balanced study of the various groups of people without showing preference or bias. This was accomplished by guiding the reader to comprehend this time from a fundamentally different perspective, which is essential in grasping the broader dilemmas facing the American continent during 1776.

As a card-carrying member of the Wyandotte Tribe of Oklahoma, I was eager to read his interpretation on the effects that westward expansion had on the Native Americas. Saunt provides subtle reminders of the struggles and atrocities that Native Americans faced during this time. For example, in chapter five, he demonstrates the importance of beavers and the effect they have on the landscape and various species, and he states that due to the beaver fur trade, ‘it is impossible to unravel the consequences of their near extermination’. (144) Here, Saunt correlates to the Native Americans as the beavers were being eradicated, so too were Native Americans being killed or systematically removed from their lands, which would later have profound consequence on the greater landscape of the North American continent. 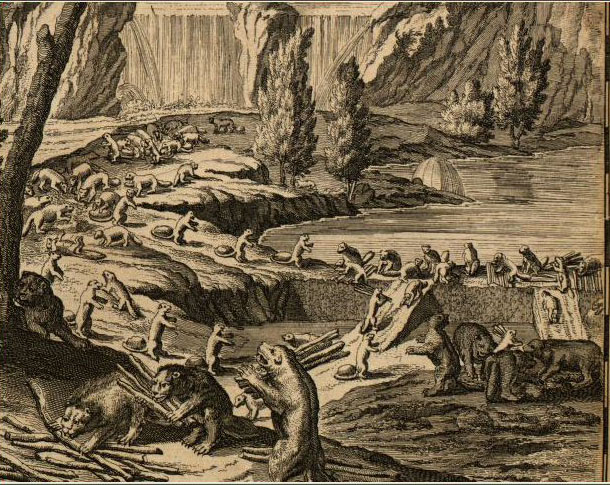 This is ‘View of ye industry of ye beavers in making dams to stop ye course of rivulet’, in A New and Exact Map of the Dominions of the King of Great Britain, by Herman Moll (1731). This is shown on page 129 of the text.

This book has a coherent overarching theme that with exploration and expansion, change is inevitable as the landscapes are ever shifting. In each circumstance, Saunt confirms how each group of people were either the conquered or the conqueror whether by conflict or through commerce. Though the chapters occasionally feel disjointed, Saunt’s narrative is consistent in establishing the cause and effect of each circumstance examined. While moving from one group to another, he makes enormous leaps in geography and circumstance. As a result, each chapter must be read independently from the others.

Suant’s purpose to have the reader ‘extend their bounds and discover the continent west of the Revolution’ is certainly achieved. This books serves as a reminder that as the American Colonies were declaring and fighting for their independence, the Aleuts, Lakota, Osage, Creeks, and many other nations were losing theirs. West of the Revolution provides well-researched insight into the geography, experiences, movements, and struggles each of these cultures faced in an ever-shifting landscape of the North American continent.

Michael Griggs is a PhD student in the department of History at the University of Edinburgh conducting research on the political theology of Scottish Covenanting thought and its later contribution to the American Revolution. He also holds a BA (History) from the University of North Carolina at Charlotte, an MDiv (Church History) from Southwestern Seminary, and an MLitt (History) from the University of Glasgow. His research interests include religious history between Scotland and America in the seventeenth and eighteenth century. When he is not reading sermons and journals of Presbyterian ministers, he can be found playing with his children, riding his bicycle, or watching football (both kinds). He can be found at https://edinburgh.academia.edu/MichaelGriggs or on Twitter @MichaelGriggs
View all posts by Michael Griggs →
Tagged  Early American History, Europe, First Nations, Native Americans.
Bookmark the permalink.