Book Review: We Are An African People by Russell Rickford 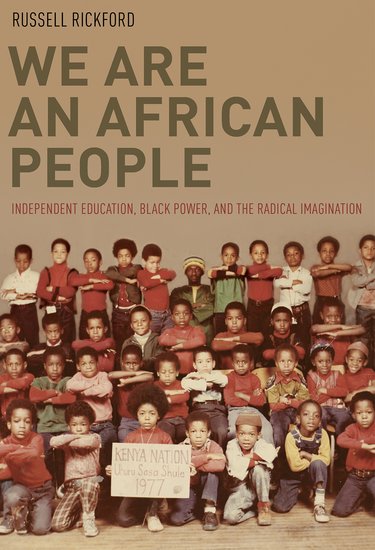 In We are an African People, historian Russell Rickford attempts and succeeds to define an era within African American culture where new models of pedagogy and identity were being explored by African Americans. Rickford researches the establishment and ultimate redundancy of Pan African, Afrocentric schools within the USA during the period post-Civil Rights era; where the ‘freedoms’ of African Americans were celebrated, and a ‘post racial’ ideology set. There were many, within the African American community, grappling with their racial identity and equality in a system that was underwritten by the White majority. Rickford explains how his work ‘describes a moment in which cadres of activist-intellectuals saw rethinking schools in poor and working class African American communities both as a way to redeem the process of formal learning and as a way to pursue, indeed, prefigure, black cultural and political sovereignty.’ (4) Rickford attempts to give modern relevance to this historical movement and give definition to what he coins Left Pan Africanism.

There is significant ground traversed within the seven chapters and the epilogue of We Are An African People. The opening two chapters set the scene following the desegregation of schools. Due to the lack of equity in the quality of the public school system, the emergence of the Afrocentric houses of education were a necessity to ensure that a generation of young black minds had access to a formal education. The following chapter outlines embryonic attempts to create the Pan African Schools, which at this stage had not established themselves as ‘Pan African’ but were rather an outcrop from SNCC and The Nation supported by ‘revolutionary’ thinkers post-Civil Rights. The establishment and success of the Nairobi School follows in Chapter Four and there is a clearer view of the Pan African identity being established not only in the ethos of the school but within the minds of the students; a cognitive emancipation from bondage back to African principles is developing and this is further explored in Chapter Five. Chapter Six looks at the broader community implication of these schools and the culture of higher education establishments, such as Howard University. Chapters Seven and the epilogue detail the unfortunate internal struggles — opposing ideological viewpoints on how the schools should operate — within the system or without (such as Black Nationalism). Rickford ends on a note of promise: the schools were intrinsic to birthing a generation of freer thinkers and hopeful activists.

Rickford begins his review of this period by acknowledging that, due to the glacially slow roll out of school desegregation policy and the eroding of confidence in the public-school systems within the Black community, activistic community leaders sought to establish places of learning for Black children. The emergence of scholarly institutions was seen as a necessity to promote racial pride by attempting to redefine Black American identity and an adjacent (to the prevailing state-run schools) form of pedagogy specific to African American communities. Rickford acknowledges the ground that is more commonly recognised in this arena: Marcus Garvey’s Universal Negro Improvement and Elijah Muhammed’s Nation (NOI). Beginning with a quotation from political activist Kwame Ture, Rickford’s insightful narrative clearly sets out this Pan African Movement as an extension of those who began in the Student Nonviolent Coordinating Committee (SNCC), as they strove for minority independence and to reclassify ‘Blackness’ toward ‘African American’. However, this book is necessary as it identifies the massive effort outside of the more publicised works to educate (dare I say, emancipate) young black minds from a post-slavery mindset of inferiority, and successfully brings to prominence pioneering black educators such as Gertrude Wilks, founder of the Nairobi Day School.

Rickford is a meticulous academic. This is an exceptionally well-researched work, and he is in strong command of the history of this movement. Fascinatingly, in Chapter 4, he describes attempts to rename an area of California Nairobi, as Black students seek to redefine themselves as an African people. He explores the emergence of the doctrine of Kawiada (124), its later repudiation by the likes of Amiri Bakara (226), and the creation of Kwanzaa (124), which continue to be used and celebrated today. Rickford is thorough: he discusses the contradictions of Kwanzaa and interdisciplinary struggles to determine which practices of Africanism should be adopted wholesale and which should be abandoned; like an African American Council of Nicaea. Finally, he explores the varying degrees to which leaders within this movement agreed or, as he illustrates, disagreed, which led to the eventual dissolution of Pan Africanism as ‘Pan African nationalists struggle[d] to adapt to the social and political circumstance’ (224). Lastly, we see the emergence of Rickford’s Left Pan Africanism (226) movement, which adopted revolutionary and communist leanings. For those looking to place the work amongst its peers, it nestles neatly between Imbram X Kendi’s Stamped from the Beginning (2016) and Robin D G Kelley’s Freedom Dreams (2002), particularly his chapter ‘Dreams of the New Land’.

We Are An African People succeeds in identifying the challenges of establishing new forms of Black Nationalism within the dominant discourse of the democratic United States and against the backdrop of global resistance movements, whose attempts at liberation are not attempts to classify Blackness (which Left Pan Africanism aimed to emulate). Admirably, Rickford is alert to the withering of these ideologically ambitious establishments (financing these establishments was a labour of love and the support for them dried up). Clearly, Rickford is convinced that these progressive institutions were impactful upon those children who graduated from them. The ambitions of the schools to create young activists, liberal thinkers, and freer minds have been a success. Scholars or readers of this work might extrapolate that these graduates have become activists who seek to find liberal ground to seed their causes in the modern era, using platforms such as Twitter, Facebook, and protest movements (Black Lives Matter); we must challenge ourselves with the notion of whether this is a foothold, or renting of ‘owned’ space. Rickford’s book is dense but exceptionally informative.

Matthew is a PhD Candidate in American Studies at the University Of Hull. His primary research focus is Activism and Identity in the Contemporary American Novel.
View all posts by Matthew Thorne →
Tagged  African American History, Book Review.
Bookmark the permalink.