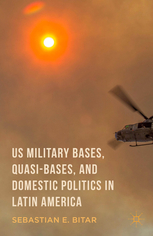 Since 1999 all attempts by the US government to open formal military bases in Latin America have failed. This leads one to assume the US has lost much of its military influence in the region. However, the existence of so-called quasi-bases, or informal bases, discussed in Sebastian Bitar’s book, demonstrates that the US has managed to maintain its military influence. Quasi-bases differ from formal bases in no other way than that they lack a formal lease agreement for use of facilities. Essentially, quasi-bases serve the same purposes as formal bases, but exist in a cloud of secrecy.

The dominant belief among scholars is that quasi-bases are a consequence of a change in the US overseas basing strategy from large bases to smaller bases. However, Bitar finds that this explanation is insufficient to explain the failure of formal basing agreements. He points out that the US kept pursuing smaller, but nonetheless formal, bases even after the transformation of its basing strategy, but failed in many cases to negotiate such formal arrangements with host nations. Quasi-bases were only established as an alternative when formal agreements failed. The denied renewal of the US military base in Manta, Ecuador, or the unsuccessful negotiations for new bases in Colombia, are examples of such failed attempts.

Bitar’s analysis in this regard raises a critical question: Why has the US been unable to open new formal military bases, or retain existing bases, in Latin America when it did so successfully in the past?

In answering this question, Bitar discards a second dominant belief held by scholars of U.S. military bases: that a change in balance of power in the region, caused by the perceived decline of US hegemony in the Western Hemisphere, has empowered Latin American states such that they can effectively object to US bases in their territory. However, this presumed decline of US hegemony, according to Bitar, conceptually cannot serve as a proper explanation for the failure of formal basing negotiations.

Using a purely realist definition of the concept, Bitar argues that hegemony assumes states to be unitary, single actors. They behave rationally and seek the advancement of their interests within the power game between hegemon and subordinates. Bitar points out that in all cases discussed in his book the governments of potential host nations actually welcomed a US base. The bases were only prevented as a consequence of popular opposition to the base within the host nation. Thus, Bitar concludes, the decline of US hegemony is not a sufficient explanation.

Bitar therefore argues, using several case studies, that basing negotiations with Latin American states will fail when either the domestic political opposition to the US base is so large that it amounts to an electoral veto, or when the institutions of the host nation allow for an institutional veto, in most cases a decision by a supreme or constitutional court. If either of these conditions is met, a quasi-base will be the consequence.

The first part of the book sets up this argument in its discussion of successful basing agreements, such as the Comalapa base in El Salvador and the initial negotiations for the Manta base in Ecuador. The lack of substantial domestic opposition is highlighted and in both cases neither an electoral veto nor an institutional veto prevented the final agreement. Later, in chapter four, Bitar discusses how during negotiations for renewal of the Manta base an electoral veto disabled success, after which a quasi-base followed. In chapter five the negotiation of seven bases in Colombia is analyzed and provides an example of how, when a weak opposition prevents an electoral veto, an institutional veto can still obstruct a formal US base.

Bitar’s book makes a hard case against the decline of US military influence in the region. While this is likely the most important contribution the book makes to the existing scholarship, its main weakness can also be found here. Bitar’s argument that the rise of domestic opposition in Latin America against US bases is the main reason for the failure of base negotiations does in fact fit within the perceived decline of US hegemony, a theory Bitar discards in answering his main question. The realist understanding of hegemony that he employs, however, is a limited one. Hegemony can be measured not only by military, economic and political power, but also, drawing on Gramsci, by the ideological concordance of society within the subordinate state [1]. In a democracy, ideological concordance is measured not only by the ruling elite but also by the opinions of the masses. These are relevant because they can, as Bitar’s cases demonstrate, have an impact on whether or not a subordinate state accepts the hegemon. Thus, increased opposition to US policy in general or specifically to a US base effectively does confirm the decline of US hegemony.

Therefore, while Bitar dismisses this explanation, in reality his study reinforces it. This conceptual limitation of hegemony from a purely realist perspective is perhaps the only flaw in an otherwise very informative, well researched, and compelling book.

Quintijn Kat is a PhD student at the Institute of the Americas, University College London, researching the causes of decline of US hegemony in Latin America since the end of the Cold War. Particularly he looks at the interaction between failure of US foreign policy in the region and Latin American cooperation initiatives that exclude the US. He is also a member of the UCL Americas Research Network and can be found here: http://www.ucl.ac.uk/americas/people/research-students
View all posts by Quintijn Kat →
Tagged  C20, Hegemony, History, International Relations, Latin America, Military, Politics.
Bookmark the permalink.