Book Review: This Nonviolent Stuff’ll Get You Killed: How Guns Made the Civil Rights Movement Possible by Charles E. Cobb 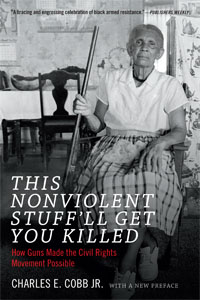 In an interview with Dr Kenneth Clark in 1963 Malcolm X said that Martin Luther King Jr was ‘subsidised by the white man’ into making the Afro-American population of the United States ‘defenceless in the face of one of the most cruel beasts in American history. That’s this American white man.’[1] Malcolm’s assessment of the weakness of the civil rights movement was shared by other critics including WEB DuBois, however Charles E Cobb Jr’s work attempts to illustrate that such accusations were without foundation and incorrect. Cobb argues that the method of nonviolence was not passive and weak as expressed by DuBois and Malcolm. In this work Cobb argues that while King and other leaders of the civil rights movement championed the philosophy of non-violence it relied on armed self-defence to empower individuals within the movement to face the opposition non-violently. Cobb, a former field secretary of the Student Non-Violent Coordinating Committee (SNCC), uses his experience in the field in Mississippi to highlight the connection between the effectiveness of the civil rights movement and armed self-defence. However Cobb’s thesis is weakened by the overpowering majority of the work that sets the historical context rather than the illuminating minority that focuses on his own experiences.

Cobb attempts to support his thesis with an extensive history of the grassroots organising and activism in the South, and exploring the concept of resistance. In it Cobb explores the culture of the gun within the black community, and by doing so suggests that nonviolence advocated by the civil rights movement was an alien concept to most within the black community. Cobb argues that guns were a common part of black and white Southern culture and its place as part of the civil rights movement was a natural one to those involved. His examination and recollection of the role of the Deacons for Defence and Justice in the South is intriguing and illustrates the strength of the work. The oral histories and grassroots level recollections that Cobb relays are a refreshingly stark contrast to the multitude of works on the civil rights movement that focus on the leadership of the movement. While such ‘top-down’ history has its place, this ‘ground-up’ analysis reveals the personal motivations of the individuals within the movement and gives the work its importance.

However the work falls between two stools – it is neither entirely an academic piece of work nor is it a memoir. The bulk of the first half jumps around far too much despite the author’s warning that the study would not be chronological, and as such it lessens its impact as an academic piece of work. In contrast, the work cannot be convincingly called a memoir because of the size of the historical setting and as such Cobb’s thesis is undermined by its inability to be satisfactorily labelled. Had the academic route been rigorously undertaken then the analysis of armed self defence on the civil rights movement would have been applied nationally rather than from just one state. Conversely, had the work solely focused on the memoir rather than attempt to unsuccessfully place it within a wider historical context then it would have greater merit. It is due to these criticisms that the work ultimately fails to answer the question it sets itself – how did the guns make the civil rights movement possible?

While the paperback edition includes a connection between the activism of the Freedom Movement to the modern day activism that surrounds the #BlackLivesMatter campaign, the thesis does not examine the rather obvious influence on the armed self-defence undertaken by the Black Panther Party in Oakland. The controversial movement is briefly acknowledged within the book however its connection with the armed self defence undertaken by civil rights members is not explored. The same can be applied to the entire Black Power movement that evolved from the civil rights activism of the 1960s – how much, or little, did it owe to such empowerment of the civil rights movement? The failure to address such a question is certainly a missed opportunity that would have added individuality to the deluge of writing on the civil rights movement. That is not to say that Cobb’s work is entirely without merit – the final half that is composed of his own work in SNCC is an excellent memoir and had this been more extensive it would have given the work greater strength, it just a shame that it fails to convincingly deliver what it promises.

Book Review: Connexions: Histories of Race and Sex in North America by Jennifer Brier, Jim Downs and...
The Transatlantic Impact of civil rights anthem “We Shall Overcome”
Not just Yo’ Mama but Rap’s Mama: The Dozens, African American Culture and the Origins of Battle Rap
The People v. Ossian Sweet
Book Review: The Captive’s Quest for Freedom: Fugitive Slaves, the 1850 Fugitive Slave Law, and the ...
Overcoming Postmodernism
The Best of 2014, and What's Next for U.S. Studies Online in 2015
The Dragon’s Back: China, US Foreign Policy and the 2020 Election

Dafydd Townley is a Graduate Teaching Assistant and PhD student in the University of Reading's History Department. His doctoral thesis 'Spies, Civil Liberties, and the Senate: The 1975 Church Committee' investigates the conflict of maintaining national security while observing civil liberties in the United States. His interest include the United States Intelligence Committee and modern US political and social history.
View all posts by Dafydd Townley →
Tagged  Black History, Civil Rights, History, Politics.
Bookmark the permalink.