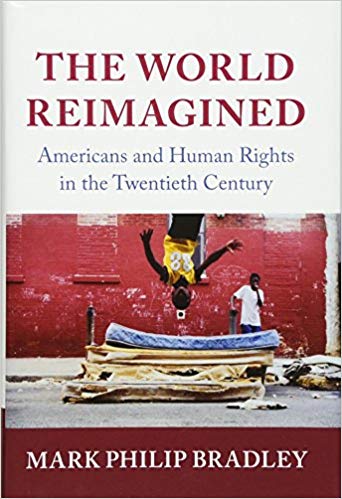 In June 2018, Nikki Haley, United States ambassador to the United Nations, criticised the scathing Report of the Special Rapporteur on extreme poverty and human rights on his mission to the United States of America, arguing that the UN should instead focus on developing countries such as Burundi and Congo [1]. Whilst symptomatic of the United States’ complicated relationship with multilateralism in the era of “America First”, Haley’s response also highlights America’s complex political geography of human rights. This duality in Haley’s words is emblematic of Mark Philip Bradley’s bridging of diplomatic history and cultural analysis in The World Reimagined: Americans and Human Rights in the Twentieth Century.

Surfing the high tides of transnational history and the history of human rights, The World Reimagined explores how human rights went “from an exotic aspirational language to an everyday vernacular”, by zooming in on the role of the United States in the rise of what Bradley calls “the twentieth-century global human rights imagination” (3). This elusive topic is dealt with in two parts, covering the prominence of human rights language in the (long) 1940s and the “rediscovery and remaking of the global human rights imagination and its American vernaculars in the 1970s” (11). With this dual periodisation, The World Reimagined both honours and corrects Samuel Moyn’s The Last Utopia (2010), which argued that it was only in the 1970s that human rights began to make sense to large groups of people as the proper cause of justice [2]. For this, and the aforementioned bridging of diplomatic history and cultural analysis, The World Reimagined has rightly been praised as a “significant contribution” to the human rights historiography and has even been called a “landmark book” [3].

Whilst these laudations did not exempt the work from subsequently levelled minor points of criticism, unfortunately some more major dissonant sounds must accompany the unison praise. Bradley’s occasionally flowery, jargon-rich and imprecise prose can distract during the more analytical parts of the book – “elastic conditions of possibility” (7); “quotidian local spaces” (7); “nonconforming dissidents” (157). Nonetheless, the author is at his best when reporting on visual and auditory sources, as is demonstrated by his description of Aaron Copland’s “Preamble for a Solemn Occasion”:

Copland’s Preamble began in a dissonant vein aimed to evoke the scourge and sorrows of war. The mood shifted in its second section toward a more triumphant sensibility supported by the liberal use of brass and percussion. Olivier [Sir Lawrence Olivier] read from the United Nations Charter, his voice quietly underlined by an orchestral reprise of the opening segment of the piece, after which the triumphal valences of the second section returned to bring the composition to an affirmative and ringing climax (14).

Such gems are not limited to hints of ‘musicophilia’, since Bradley discusses case law, works of literature and philosophy, jurisprudence, and visual sources with the same apparent ease and flow. Seemingly off-the-cuff, the author often points out interesting transnational parallels, e.g. casually linking the American genre of reportage to German Neue Sachlichkeit (26) and explaining the receptivity of American readers to the first-person method employed in Solzhenitsyn’s Gulag Archipelago in reference to the New Journalism of Truman Capote and Hunter Thompson (169). This is a rare trait that readers of Bradley’s previous works, such as The Familiar Made Strange (co-edited with Brooke Blower), will recognise, and it is what sets Bradley apart from many other historians.

At times, though fortunately rarely, imprecise language is accompanied by an imprecision with regards to facts. For instance, it is not true that in 2016 the United States “remained the only country in the world that had not signed the Convention on the Rights of the Child” (229). The United States signed the Convention on 16 February 1995, but was and still is the only participant that did not ratify it, whereas plenty of other states did not sign the Convention, but ratified it nonetheless. [4] This may sound like legalistic nitpicking, but it in fact undermines the negative American exceptionalism in Bradley’s coda – the claim that “the American allergy to international human rights law” is “so different from practices elsewhere in the world” (230). To put the importance of American non-ratification into perspective, Afghanistan ratified the Convention, but made “reservations on all provisions of the Convention that are incompatible with the laws of Islamic Shari’a and the local legislation in effect”. Such examples aside, anyone with a superficial sense of the contemporary state of international human rights law can tell that the non-U.S. world is far from a heaven of obedient compliance.

Overall, the structure and content of The World Reimagined more than make up for the occasionally inaccessible language. A few analytical slips aside, Bradley may have actually succeeded in the difficult task he set himself by convincingly treating a topic as elusive as the imagination of human rights.

Live Human Exhibits: The World Columbian Exposition as a Space of Empire
American Studies in Europe: Interview with Dietmar Meinel, Freie Universität Berlin
60 Seconds With Nick Witham
Storify of our #bookhour twitter chat on STATION ELEVEN by Emily St. John Mandel
Patient Zero and the Making of the AIDS Epidemic by Richard A. McKay
60 Seconds With Emma Long
“MATTER IS THE MINIMUM”: Reading Washington, DC’s BLM Memorial Fence
The Campaign of Miracles?

Simon van Oort read US History, and Jurisprudence and Philosophy of Law at the universities of Oxford (MSt) and Leiden (LLM). He wrote his MSt dissertation on the origins and uses of the phrase 'Founding Fathers' (supervised by Dr. Gareth Davies) and his LLM dissertation on the history of the Dutch constitutional ban on judicial review (supervised by Prof. Andreas Kinneging). He currently works as a trainee legislative adviser and writes in a personal capacity.
View all posts by Simon van Oort →
Tagged  C20, Cultural History, History, human rights, International Relations.
Bookmark the permalink.