Book Review: The Tea Party Divided : The Hidden Diversity of a Maturing Movement by Heath Brown 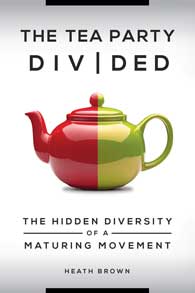 In the age of President Donald Trump and the rise of the alt-right, it almost seems passé to focus on the Tea Party- the phenomenon that took American politics by storm during and after the Great Recession. However, revisiting the Tea Party not only carries the possibility of discovering something new about the movement and its participants, but also could provide us with important insights on current events. Heath Brown’s book The Tea Party Divided: The Hidden Diversity of a Maturing Movement offers this very opportunity.

First and foremost, scholarship on the Tea Party is still in its infancy, with many of the relevant studies having been done during the phenomenon’s rise and very few in retrospect. This is not to detract from the works of Theda Skocpol and Vanessa Williamson with the Rise of the Tea Party and the Remaking of Republican Conservatism (2012) or Christopher Parker and Matt Barreto with Change They Can’t Believe In (2013), two books which remain excellent sources on the subject. However, both works, and others like them, are limited by the time frame in which they worked, one that hindered the development of a more holistic picture of the Tea Party.

Unlike its scholarly predecessors, The Tea Party Divided looks back on events that involved the Tea Party six years earlier and interprets them through the lens of our current time. Brown divides the Tea Party phenomenon into three different phases, with an open third phase representing the future. Through this approach of looking backwards at events, Brown highlights that the Tea Party is not the homogenous conservative movement that many in the media portrayed it to be from the outset. In fact, he argues that it ‘resembled a scattered array of political interests groups, linked together by a loose set of ideas, rather than a formal institutional structure’ (70) [1].

Brown’s obvious major strength is in demonstrating that the Tea Party had and has a heterogeneous make-up. While Rise of the Tea Party and Change They Can’t Believe In both also draw on data that highlight such diversity in the movement – an observation that clashes with the standard impression of the Tea Party as a monolithic group – their narratives do not make any significant attempt to deviate from that impression. Brown, conversely, not only presents similar data but also develops a narrative to emphasize that the Tea Party is not a group comprised solely of racists or uninformed conservatives. He highlights how libertarians, Democrats, and even liberals have participated in Tea Party organizations in the country at some time. As a result of such acknowledgements, he is also honest in his assessment that the country may have missed serious opportunities over the past seven years to create a working relationship with the Tea Party because of certain biases or preconceptions about how individuals become involved in politics.

Brown’s perspective on individuals’ political involvement is another strength of The Tea Party Divided. Since the Tea Party was not just as single movement, but rather a type of organizational tool that allowed people to meet under one banner, different sub-groups within it had different organisational structures that became blurred in public perception. The astroturfing that came to be associated with the Tea Party as a whole, and which refers to the practice of masking the sponsors of a message to make it appear as though it originates from and is supported by grassroots participants, was in reality attempted by only a minority of the groups that operated under the Tea Party umbrella.

To be fair, Skocpol and Williamson outlined similar arguments in the Rise of the Tea Party, so this argument is not the most original of Brown’s work. However, he does echo and support their research with further data to bolster their claims. He argues that even if there are elements in the Tea Party that represent astroturfing, these elements ‘are more complex than often acknowledged’ (1658).

Perhaps the greatest strength of the book is Brown’s subtle handling of the problems that have evolved following the Tea Party’s stunning success in the elections of 2010. As Brown demonstrates, the Tea Party was heterogeneous and largely made up of grassroots groups with their own agendas, as a result of which the officials who claimed an affiliation with the Tea Party had extreme difficulty in formulating a coherent agenda. In Brown’s own words, ‘the second phase of the movement, which began after the 2010 election, must be understood in terms of those who were elected, how they legislated, and the differences between those who affiliated with the Tea Party’ (1902).

Subsequently, if there are any weaknesses in The Tea Party Divided, one might be the continuing reference to the Tea Party as a movement rather than as some new political organization for the twenty first century. If the Tea Party is indeed as heterogeneous as Brown states, it would be more accurate to describe it as a new type of organization capable of bringing together contradictory movements that highlight the common problems they see in society – kind of rainbow coalition as it were. This would be a more accurate way of describing the Tea Party’s diverse ideological standpoints, and Brown’s failure to do so is disappointing.       Nevertheless, Brown’s book is a fresh take on the Tea Party, which still warrants further detailed investigation – if not for its historical value, then for a key to understanding the current political climate in the United States. Indeed, there are lessons to be taken from Tea Party that could be applied to the Trump phenomenon.

Dr. Alfred Cardone is an American living in Europe, taking advantage of the "outsider" perspective in order to understand his country's political system and how members of society interact within the United States. He received a BA in History from Bates College in Lewiston, Maine in 2002, an MA in Political Science from Northeastern University in Boston, Massachusetts in 2004, and recently received his Doctorate from King’s College, London in 2016. Alfred's research interests include populism, radical politics, and protest movements.
View all posts by Alfred Cardone →
Tagged  C21, Democracy, Politics, Republicans.
Bookmark the permalink.