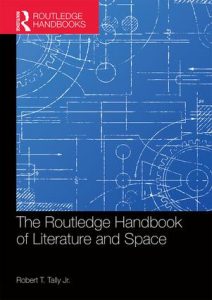 The Routledge Handbook of Literature and Space is the sixth collection of essays in a series edited by Robert T. Tally Jr. who is also general editor of the Geocriticism and Spatial Literary Studies series published by Palgrave Macmillan.

Robert T. Tally Jr.’s research continues to contribute immensely to literary geographies, spatial studies and cultural studies. With this collection of thirty-two essays, Tally extends the range of theoretical and critical models of spatiality that commenced with his previous collection entitled Geocritical Explorations (2015). This compendium offers an excellent point of departure for scholars wishing to trace the development of the importance of ‘place’ and ‘space’ in their material and immaterial senses since the ‘spatial turn’ manifested itself in the 1960s.

This book is divided into five parts: spatial theory and practice; critical methodologies; work sites; cities and the geography of urban experience; and maps, territories, readings.

Part I allows renowned literary geographers such as Marc Brosseau, Andrew Thacker and Eric Prieto to outline how spatial studies have developed since the 1970s. Particularly interesting are the distinctions Brosseau makes between ‘imaginary geographies’ (12), imaginative geographies’ (13) and ‘geographical imaginaries’ (14) and his invitation ‘to step outside the apparent stability and closure of the written text’ (20) in order to try new approaches must be welcomed.

Part II addresses new theoretical frameworks that go beyond re-readings of established postcolonial and phenomenological theories: new methodologies such as ‘neogeography’, digital literary cartographies and ‘sound and rhythm’ studies are introduced. Most scholars will find these new explorations fascinating, especially as the essays present varying balances between theoretical discourse and concrete literary examples.

Part III groups essays together under the heading of ‘work sites’: two separate essays on the literary geographies of islands (which, interestingly enough, draw on the same prior research) and one on the spatiality of city neighbourhoods. The other four essays are an eclectic mix exploring imagined and imaginary spaces including natural and manmade atopias, heterotopias, and dreams and memories.

Researchers here ask some interesting questions that open up lines of further enquiry, such as Carroll’s deliberations on virtual atopias: ‘Do these spaces empower or disempower us?’ and ‘How can we leverage them for public action?’ (165).

Part IV, in many ways, is the heart of the book. Four of the essays have an identifiable urban point of departure: here, scholars investigate the real and fictional spatialities of London, Johannesburg, Toronto and Greenwich Village. Many interesting concepts simultaneously provide novice scholars with frameworks and established scholars with fresh food for thought: the measuring of referential, spatial, linguistic and temporal distances proposed by Lieven Ameel, for example, or the ‘speculative mapping’ championed by Irikidzayi Manase. Tobin’s highly personal spatial exploration of West 10th Street, in the Heart of Greenwich Village, also makes engaging reading.

The final six essays which constitute Part V are devoted to cartographies and mapping. Many publications over the last few years demonstrate that this branch of spatial studies is growing particularly fast (among others, see Tally’s Literary Cartographies, 2014). It therefore seems pertinent to include a selection of essays here to round off The Handbook of Literature and Space.

Overall, this book is an invaluable resource for novice and established scholars involved in spatial studies. It presents a direct appeal to engage with spatial practices at the intersection with other research fields, such as literary and cultural studies, urban studies and geography. The interdisciplinary nature of spatial studies, as well as the wide range of concrete and abstract spaces explored here, means the debate launched by The Routledge Handbook of Literature and Space as to how spatiality influences literature will be effervescent for a long time to come.