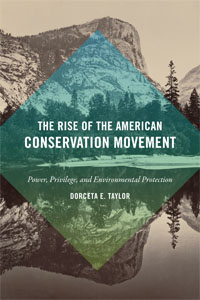 Dorceta E. Taylor introduces The Rise of the American Conservation Movement: Power, Privilege, and Environmental Protection as the second book in a series of three, although they were not published in that order. Taylor considers the first to be The Environment, and the People in American Cities: 1600s- 1900s (2009) while the third is Toxic Communities: Environmental Racism, Industrial Pollution, and Residential Mobility (2014). Although The American Conservation Movement is ostensibly the middle publication, Taylor does not rely on earlier work and instead uses the formation of the series to her advantage by focusing on different aspects of environmental history with each book structured to read as a standalone piece. This book comprises four interlinking sections on wildlife conservation, wilderness and park preservation, hunting and fishing ethics, and rural beautification.

Part II addresses gender and race in wilderness preservation, spending a considerable time on the issue of bird conservation. Taylor focuses on the roles gender, race, and class have had in the construction of people’s relationships with their environment, and in wildlife conservation and hunting ethics. In this section she aims to go beyond shallow discussions of the ways in which upper and middle-class white males interacted with the environment and with each other, and discusses ‘the interactions between males and females, and between whites and ethnic minorities’ (4). This exploration is fascinating, but becomes problematic in Chapter five where she discusses the various approaches taken by Native Americans, Blacks, Latinos, and Asians to ecology and wildlife preservation in segments which are not thorough enough to capture the complexity or diversity of such vast subjects. These sections unfortunately condense multiple conversations about race and conservation issues into vignettes which inadvertently over-simplify important social issues.

Part III analyzes efforts to protect wildlife. Chapters seven and eight focus on bird conservation, which came to prominence in the nineteenth century when feathers were a ‘symbol of high status and wealth in France, Britain, and the United States’ (195). Taylor here hones in on the Audubon society, which was first organized in 1886 to raise awareness about the bird conservation movement and later revived by women in the 1890s’ (247). The Chicago and Massachusetts Audubon societies provide an example of how these groups ‘set about… re-establishing the master narrative of women destroying birds to satisfy frivolous fashion tastes’ (201). Taylor investigates how activists cast fashionable women and milliners as the enemies of birds, shifting ‘the moralistic, guilt-laden discourse from men’s actions to women’s actions’ (198), in other words from the ethics of hunting to those of fashion.The Audubon society in fact largely ignored the role upper-class white male hunters had on bird ecology because, while ‘many of the new Audubons were founded by wealthy women who directed their campaigns primarily towards other affluent women, the organizations were often led by men’ (202). As a result, ‘bird protection organizations remained spaces of masculine prowess, power, and dominance’ (198-9).

Part IV contains a spirited argument for Taylor’s interpretation of the roles played by race, class, and gender within the environmental movement more broadly. She locates the beginning of the conservation movement in the decision of the elites to remove themselves from the city by creating spaces of leisure. Taylor illuminates the early roots of the environmental movement by illustrating how the elites became conscious of the increasing population and rising inequality of city life. Throughout her work, Taylor covers the well-known power elites, both men and women, who shaped the American environmental movement. There are familiar names such as John James Audubon, Theodore Roosevelt, Henry David Thoreau, Ralph Waldo Emerson, and John Muir along with lesser-known figures such as Genevieve Jones, termed the female Audubon for her nature painting, and Caroline Matilda Kirkland, a cultural nationalist and urban park advocate.

Taylor contributes a quarter of a century of groundbreaking work to environmental studies as a whole creating a work that does not reflect the idealist, transcendental, and romantic approaches to the environment or the utilitarian conservationist approach. Instead, Taylor presents a reasonable, measured argument in the face of ideologically charged social issues. This book succeeds in exposing the economic decisions behind the conservation movement – perhaps a historical lesson for present environmental challenges.

Reflection on 'Responding to Sexual Violence in Higher Education – Organisations, Initiatives, and A...
Review: The University of Nottingham Postgraduate Academic Retreat, 30 May – 6 June 2015
Book Review: Remaking a Life: How Women Living with HIV/AIDS Confront Inequality by Celeste Watkins-...
Symposium Panel Review: ‘Visualising the Americas: Kent’s Third Annual Americanist Symposium’, The U...
Review: ‘Collaboration in America and Collaborative Work in American Studies’
Most Viewed Posts of 2015
Book Review: Truthful Fictions: Conversations with American Biographical Novelists edited by Michael...
Review: 'Indigenous Mobilities: Travellers through the Heart(s) of Empire,' Beyond the Spectacle (On...