Book Review: The Rise of Common-Sense Conservatism: The American Right and the Reinvention of the Scottish Enlightenment by Antti Lepisto

Antti Lepistö. The Rise of Common-Sense Conservatism: The American Right and the Reinvention of the Scottish Enlightenment (Chicago: University of Chicago Press, 2021). pp. 288. $40. 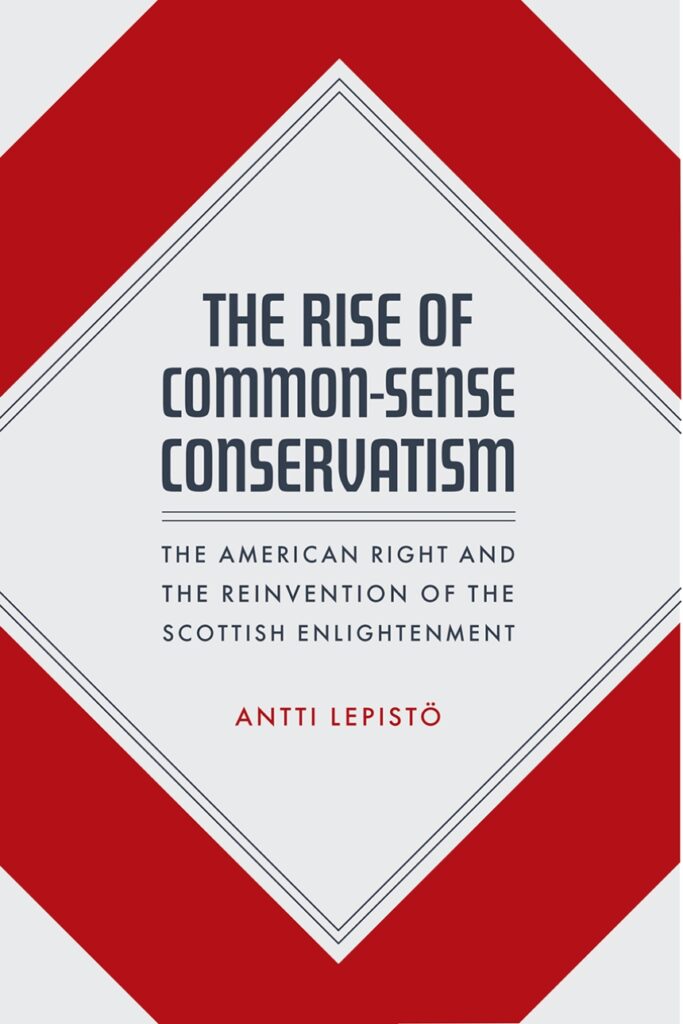 Why were historians of conservatism shocked by Donald Trump’s rise? Antti Lepistö, an intellectual historian at the University of Oulu, Finland, seeks to answer this question in his first monograph, The Rise of Common-Sense Conservatism: The American Right and the Reinvention of the Scottish Enlightenment. The work is split into six chapters each focusing on a different element of neoconservative thought. The first- and second-chapters study journalist Irving Kristol’s use of ‘common man’ rhetoric in the late-1970s and early-1980s, and how social scientist James Q. Wilson built upon this. The subsequent two chapters consider the use of this rhetoric in Kristol, Wilson, and historian Gertrude Himmelfarb’s work on morals and race during the culture war years. The fifth-chapter then provides a case study of Wilson’s 1990s work on crime, before a sixth studies how Francis Fukuyama embraced the Scottish Enlightenment. This structure advances the argument that the influence of Scottish Enlightenment on neoconservatism is overlooked and, crucially, that this ‘significantly contributed to the late twentieth century’s rise of right-wing populism.’(2)

The argument is supported by close textual analysis of key neoconservative texts which highlights how these intellectuals employed Scottish Enlightenment ideas. This is especially seen in his consideration of Kristol’s work on the so-called ‘Adversary Culture’ (44). However, what makes this examination so effective is Lepistö’s clearly communicated understanding of Scottish Enlightenment and its principal figures. For example, in chapter two this allows Lepistö to show that Wilson ‘interpreted Smith’s concepts and perspective in a framework that was very different from that of Smith: the famous Scottish thinker did not use his scheme of the sympathetic imagination, the desire for approbation, and the internalization of the views of an impartial spectator as moral conscience to attack contemporary “intellectuals” in populist terms.’(67) Thus, Lepistö emphasises that neoconservatives not only used Enlightenment ideas but re-shaped them too.

Meanwhile, the focus on four central neoconservatives shows the variety of ways in which Enlightenment thinking was employed. This works particularly well in chapter four where he ‘takes an in-depth look at how Wilson’s and Himmelfarb’s discourse on human moral nature—the “moral sense”—relates to their conceptions of the black underclass’ (106). Consequently, he challenges the view that the neoconservatives were simply racist, and shows the differing approaches they took to dealing with racial tensions in 1980s and 1990s America (106-135). A more general overview of the outlook would have been less successful in demonstrating this.

A final strength of Lepistö’s work is his nuanced approach to the more controversial aspect of his thesis: neoconservative populism. Despite aiming ‘to show that the conservative intellectual movement is very much part of the story of the rise of right-wing populism in the late twentieth-century America’ (9), he stresses that these figures were not necessarily populists (14). Nor does he claim that these intellectuals would have supported Trump (184). Subsequently, he presents a thoughtful argument which focuses on the intellectual content of the neoconservatism and avoids making sensationalistic claims regarding Trumpism.

One minor criticism of The Rise of Common-Sense Conservatism concerns its use of political labels. In making the argument that not all neoconservatives began life as Trotskyists, Lepistö infers that Daniel Bell was an ex-Trotskyist. On one occasion he writes that ‘While the anti-Stalinist, intellectually combative CCNY experience of Kristol, Bell, and others certainly contributed to the political origins of the neoconservative movement, most neoconservatives were not former Trotskyists,’ (24) and in another claims that ‘among the regular writers [of Public Interest] at this point were ex-Trotskyists Bell (a sociologist).’ (25) Daniel Bell was indeed an anti-Stalinist, however he never identified as Trotskyist, preferring socialism as an ideological position.[i] This mis-labelling detracts slightly from his otherwise well-informed arguments.

Overall though, Lepistö presents an engaging study of neoconservatism’s influences which challenges scholarship to look at its intellectual substance, and to go beyond traditional preoccupations with foreign policy and debates regarding its origins. In doing so, he provides an original approach to the comprehension of neoconservatism and makes essential reading for those interested in it.

[i] For an understanding of Bell’s early politics see: Howard Brick, Daniel Bell and the Decline of Intellectual Radicalism: Social Theory and Political Reconciliation in the 1940s (Madison, Wisconsin: The University of Wisconsin Press, 1986).

Emily Hull is a PhD student at the UCL Institute of the Americas funded by a Wolfson Postgraduate Scholarship in the Humanities. Emily’s PhD thesis uses the life of Irving Kristol, the ex-Trotskyist turned “godfather of neoconservatism,” to explore transformations in American intellectual and political life during the twentieth century.
View all posts by Emily Hull →
Tagged  American History, Book Review, conservatism.
Bookmark the permalink.