Book Review: The Myth of Emptiness and the New American Literature of Place by Wendy Harding 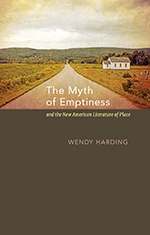 Coinciding with the summer 2014 issue of Granta entitled ‘American Wild’, and the news in October that the term ‘anthropocene’ might soon be officially adopted as the name of our epoch, the publication of Harding’s monograph could not be more prescient. Influenced by William Cronon’s famous critique of the ideological construction of ‘wilderness’ – the cultural sanctification of wilderness allows for the exploitation of land that is not wilderness – Harding avers that ‘there is no place outside human culture and no culture distinct from place’ (xv). Arguing that ‘abstraction distances the world, making it available for the worst kinds of excess’ (118), Harding selects six nonfiction texts which resist the ‘cultural amnesia’ that allows the potentially exploitative ‘myth of emptiness’ to be maintained (130), highlighting how these ‘multiple, heterogenous scripts’ constitute a ‘New American Literature of Place’ that encourages us to carefully acknowledge our inextricable connection to the world, and to accept responsibility for it (xvi). 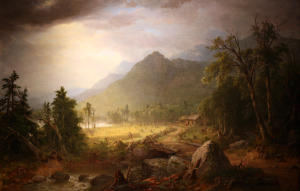 Asher B. Durand’s The First Harvest in the Wilderness (1855)

Harding’s book opens with an impressively succinct yet comprehensive introduction that explicates the cultural, geographical, and theoretical background to the idea of ‘emptiness’, emphasising its historical importance to the United States whilst seeking to expand the dialectic ‘dualism’ model (wilderness vs. civilization; sanctification vs. vilification, etc.) that so often characterises environmental writing and criticism. She follows this with a brief chapter on canonical literary engagements with ‘emptiness’, advocating the necessity of authors conceiving of the landscape as a palimpsest rather than a ‘blank page’  The first group of texts that Harding analyses in this vein – Rick Bass’s Winter (1991); Charles Bowden’s Frog Mountain Blues (1994); Ellen Meloy’s The Last Cheater’s Waltz (1999) – are taken as evidence of a move away from this ‘tradition of nature writing’ in the U.S., associated with a Transcendentalist ideal of the ‘solitary individual communing with nature in an uninhabited place’, as epitomised by Henry David Thoreau’s retreat to Walden Pond. Harding instead heralds her chosen texts as ‘new forms of writing that recognize the coexistence of human and other-than-human presences in the land’ (xvi). The authors’ various experiences – in the Yaak Valley, Montana; the Santa Catalina Mountains, Arizona; and San Juan River, Utah, respectively – provoke them into a reappraisal of their relationship with the land. Instead of the solitary, restorative commune with nature that we might expect, Harding suggests that these authors begin to show an awareness that places ‘sustain complex networks of humans, animals and things with their own histories and trajectories’ (123).

Harding’s second group of texts focus even less on the experience of individuals, instead considering U.S. territory as ‘a co-creation of place, people, and things’ (123). Jonathan Raban’s study of the Montana prairies, Bad Land (1997), Rebecca Solnit’s comparison of Yosemite and the Nevada Test Site, Savage Dreams (1995), and The Meadowlands by Robert Sullivan – an exploration of New Jersey’s eponymous swamp – all reflect her concern with the exploitative potential inherent in the myth of emptiness. Harding suggests that in exposing the fallacy of emptiness in these sites by giving voice to antecedent inhabitants, the texts evoke ‘the necessity of establishing an enduring relationship between humanity and the land’ (141). Land previously designated as ‘empty’ is revealed to contain a rich vein of history – both human and ‘other-than-human’ – and these texts relate that ‘multifarious and complicated mixedness’ in their incorporation of myriad literary techniques and genres (191). Harding argues that by ‘assuming responsibility for its representation’ these authors initiate an engagement with the ‘empty’ land that ‘complicates[s] and fracture[s] both individual and national identities’, but the very recognition of this complexity allows us to ‘enlarge’ our understanding of humanity and the earth (199, 199). 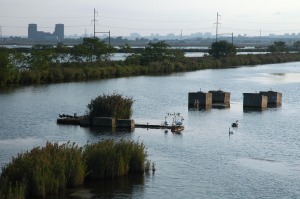 This notion of complexity is central to Harding’s methodology, with notions of fluidity, diversity, heterogeneity, and the protean abounding throughout the book. In part this is motivated by a desire to ‘disrupt monolithic ideology by introducing relativity’, but she also resists the temptation to opt for a dialectical model of analysis, instead successfully arguing for the ‘multi-centered, polyvocal’ nature of her chosen texts (20). Despite the complexity of her ideas, however, Harding’s prose is possessed of an enviable lucidity, with a marked talent for summarising her extremely well-researched arguments in sentences that manage to be concise without tending towards reduction.

Although this book will hold obvious interest for those of an ecocritical persuasion, the introduction in particular should have a much wider impact, with Harding arguing not only for the reconception of emptiness and place, but for the ‘relocation of the American subject’ (15). She promotes her book as part of a ‘contemporary cultural movement to rethink humanity’s emplacement in the world’ (19). Her focus on ‘multiple, heterogeneous scripts that suggest the complexity and multiplicity of our relationships to place’ (xvi) proves equally applicable to the U.S. subject, encouraging us to reconceive of the self as ‘a permeable entity, open to the experience of otherness’ (15). Anticipating claims – especially by Deep Ecologists – that her project to accept human impact might be seen as complicit with environmental devastation, Harding suggests that whilst we cannot always celebrate human impact, we should also not resort to willful amnesia that fails to acknowledge our place in the ecosystem. Harding’s ambitious and impressive study instead calls for the individual to become ‘a responsible actor implicated in her surroundings’ (16), a call that we would all do well to heed.

Book Review: The Politics of the Body: Gender in a Neoliberal and Neoconservative Age by Alison Phip...
Book Review: Kennedy: A Cultural History of an American Icon by Mark White
Book Review: We Are An African People by Russell Rickford
Book review: Preparing for War: The Emergence of the Modern U.S. Army, 1815-1917, by J.P. Clark
Review: PG BAAS Conference - Connection and Collective Action: Past and Present (Online)
Book Review: The Gospel According to David Foster Wallace: Boredom and Addiction in an Age of Distra...
Book Review: John Dos Passos’s Transatlantic Chronicling: Critical Essays on the Interwar Years.
Book Review: Slavery in American Children’s Literature, 1790-2010 by Paula T. Connolly

Iain Williams is a PhD candidate at the University of Edinburgh. His research focuses on David Foster Wallace and how his work engages with notions of sincerity and authenticity. He holds an MA (Hons) in American Studies and an MSc in U.S. Literature, both from Edinburgh. An article on Wallace is forthcoming in the journal Critique: Studies in Contemporary Fiction.
View all posts by Iain Williams →
Tagged  C20.
Bookmark the permalink.