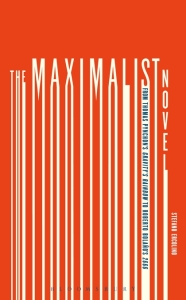 In this assertive monograph Ercolino seeks to introduce and codify the formal characteristics of what he terms the ‘maximalist novel’: ‘an aesthetically hybrid genre of the contemporary novel’ that emerged in the United States with William Gaddis’s The Recognitions (1955) (xi). Attempting to instantiate broader transnational horizons for his study, Ercolino suggests that the genre ‘emigrates’ from the U.S. at the start of the twenty-first century, and the diverse nature of the seven examples he offers – Thomas Pynchon’s Gravity’s Rainbow (1973); David Foster Wallace’s Infinite Jest (1996); Don DeLillo’s Underworld (1997); Zadie Smith’s White Teeth (2000); Jonathan Franzen’s The Corrections (2001); Roberto Bolaño’s 2666 (2004); Babette Factory’s 2005 dopo Cristo (2005) – reflects this blooming sense of cosmopolitanism.

Informed by three antecedent theories that deal with similar concerns – Tom LeClair’s ‘systems novel’, Franco Moretti’s ‘modern epic’, and Frederick Karl’s ‘mega-novel’ – Ercolino identifies ten ‘elements’ that characterise the maximalist novel: length; an ‘encyclopedic mode’; ‘dissonant chorality’; ‘diegetic exuberance’; ‘completeness’; ‘narratorial omniscience’; evidence of a ‘paranoid imagination’; ‘intersemioticity’; an ethical commitment; ‘hybrid realism’ (xiii-xiv). Whilst accepting that these elements may vary in importance from novel to novel, Ercolino nonetheless avers that they are ‘systematically co-present’, and goes on to expand upon each concept in succinct chapters that explore ‘the theoretical, historical and aesthetic significance of each feature’ (xv). Analysis is somewhat tempered by multiple syntactical errors – for example: ‘prejudice toward the postmodern continues still, in actual fact, to remain firmly rooted’ (134) – but these could perhaps be blamed on awkward translation; on the whole Ercolino is persuasive in his conception of the genre and the identification of its constituent features. He is particularly astute in pursuing the genealogy of each element; ‘taking into consideration literary history as a whole’ and thus avoiding the reductive trap of portraying the maximalist novel as paradigmatic of a ‘postmodern’ turn (70). As it happens, Ercolino is so convincing in tracing the components of the maximalist novel through epic and modernist traditions that he sometimes runs the risk of threatening his own project, by challenging his axiom that the genre only emerged in the late-twentieth century. Moby-Dick , for example, would seem to conform to the elements of the maximalist novel, yet this would compromise Ercolino’s timescale and so it goes largely unmentioned.

There are, however, a number of problematic assumptions in Ercolino’s methodology. Although he is convincing in his delineation of the genre more generally, Ercolino’s direct engagement with his corpus is often insufficient. Confident in his ability to define an element conceptually, he sometimes assumes that its fictive iteration will be self-evident. Perhaps more serious are the implications of the maximalist novel’s ‘fundamental symbolic need: to relate the complexity of the world we live in, by providing a totalizing representation of it’ (115). Comparing Michael Cunningham’s Flesh and Blood with The Corrections, for example, Ercolino suggests that in the former ‘the relationship between the representation [of the family] and the social totality is metonymic in nature, while in the maximalist novel it is synecdochal’ (117). Ercolino’s exaltation of the Lambert family as ‘the representation of a whole…of America today viewed as a plural cosmos’ (116) is deeply problematic; the assertion that a wealthy white middle-class family can – with ‘certitude’ – be taken as representative of ‘the whole’ of the U.S. is extremely troubling indeed.

Despite Ercolino’s attempts to be inclusive of ‘minorities’ there is always an implicit presumption of a homogeneous United States that goes unexamined.[1] This is particularly revealing in relation to the bias towards white, straight, male authors within the maximalist genre. Although Ercolino is perhaps correct in noting that the ‘Great White Male’ has historically had more access to positions of power in society, there is still an alarming phallocentrism in the claim that ‘women and minorities’ ‘have not enjoyed the same privilege as white males to look at the entire country or the world from a position of full belonging’ (9). This is not to say that Ercolino accepts the subjugation of ‘minorities’, but ‘full belonging’ is figured as an exclusively white male position to which they should conform, rather than a recognition of equality. There is an elitist supposition that – due to their privileged position – white men are somehow imbued with the ability to know the ‘entire country or the world’. Although presented in the context of commodity fetishism, Ercolino’s subsequent claims for the importance of length – ‘length should be understood to be the indispensable material foundation of the maximalist narrative project’; length is ‘both a possibility and a potent attraction’; length is ‘a guarantee of worth’ –  become almost comic (21, 19, 22; italics in original).

Although persuasive in identifying evidence of a growing movement towards the maximalist novel, Ercolino’s tendency to write in unchallenged absolute terms proves troubling. Indeed, the very suggestion of an author even attempting a ‘totalizing representation’ of the world appears anachronistic, if not imperialistic. Revisiting Borges’ ‘On Exactitude in Science’ might highlight the difficulties of representing the world, and serve as a reminder that sometimes less can be more.

[1] Indeed, Ercolino’s explicit ‘recognition of an American primacy’ (xii) implies that ‘totalizing representations’ of the world must also subscribe to ideals of U.S. hegemony to be considered maximalist.

Iain Williams is a PhD candidate at the University of Edinburgh. His research focuses on David Foster Wallace and how his work engages with notions of sincerity and authenticity. He holds an MA (Hons) in American Studies and an MSc in U.S. Literature, both from Edinburgh. An article on Wallace is forthcoming in the journal Critique: Studies in Contemporary Fiction.
View all posts by Iain Williams →
Tagged  C21, Contemporary Fiction.
Bookmark the permalink.